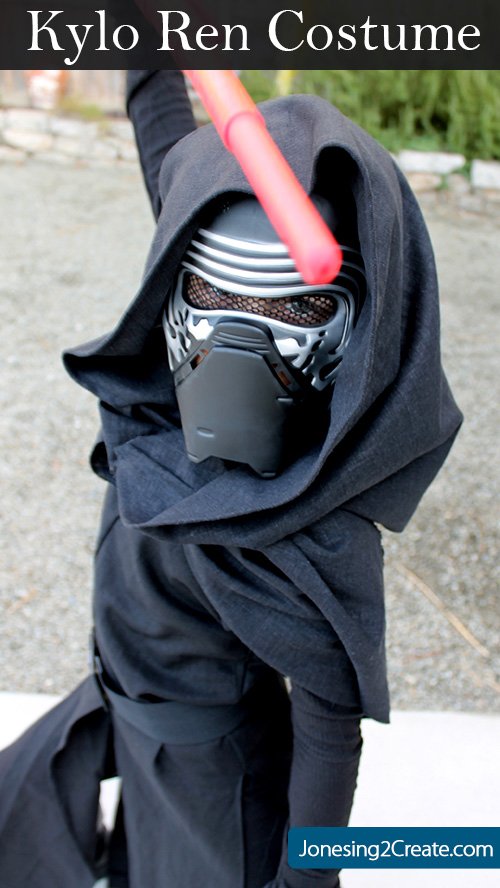 Since my son’s Star Wars birthday party, the boys in our house have been a “little” nuts about Star Wars. Combine that with all the buzz about the new Star War’s movie “The Force Awakens” and it is no wonder that B desperately wants to be Kylo Ren for Halloween. B even tried to talk me into letting him wear his Kylo Ren costume to his Cub Scout pack meeting this week. Which would have been awesome because they were having uniform inspection that week. I can just see him lined up with all the other Cub Scouts.

Before starting on B’s homemade Kylo Ren kids costume I did a lot of research. There isn’t a lot about Kylo Ren out there yet and mostly what I found were tutorials for elaborate cosplay costumes. But I wanted something fast, cheap, and easy. So I found some ways to get the overall effect without spending hours on my sewing machine or a ton of money.

For a quick overview, B and I did a video tutorial, but I list more details below in the blog post. The video isn’t great because I was trying to do everything one handed, but it doesn’t matter because B steals the show. He is so stinking cute.

I know that there are tutorials on how to make the Kylo Ren mask by hand, but you can get it cheap enough online

that it was worth it to just buy it.

I debated a long time on how to do the hood. I wanted it to be easy to make, but it also needed to be durable, easy to put on, and it needed to stay put. B is a crazy active boy and I knew he wouldn’t be fussy about how he was wearing the hood. That’s when I realized that Kylo Ren’s hood is basically a scoodie – a hooded scarf. Easy! And yes, the idea of Kylo Ren in a scoodie is hilarious.

So I cut out a scarf with ragged edges and a cape shape in the back like Kylo Ren’s. You don’t have to be too picky because it is supposed to look worn and ragged. 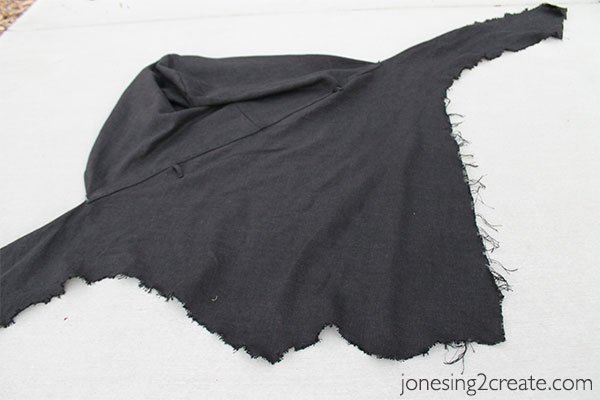 For my son, here are the measurements of the cape. But it will need to be made bigger or smaller depending on the size of your child. When you first cut, I recommend making the scarf arms longer. You want it long enough to hang nicely over both shoulders and it is always easier to trim it then having to make it longer.

For the fabric I used a nice linen. I wanted something that would hang well and that also had a similar weave to Kylo Ren’s. Using nice fabric can make a world of difference in how something hangs. Burlap is cheaper and has a similar weave, but it is really itchy. B struggles enough with sock seams, I knew there was no way he was going to wear burlap. By using coupons, I was able to get the price down. You could also use flannel if you don’t like to mess with a hem. I don’t know if I would use knit though. It is too lightweight and looks too feminine for a Star Wars villain.

For the hood, I decided to double up the fabric to get a nice clean seam along the front and to make it hang nicely. To do the hood, just cut out a piece of fabric that is about 28 inches by 34 inches. Then fold it in half so that it is 34 by 14 inches. Along the fold, sew down the length about 1/4 inch from the edge. Then fold it in half again so that it is 14 x 17 inches. The part with the seam will be the front of the hood and the side with the fold will be the top. I then used a large bowl to trace a round edge along the top back of the hood and cut it out. To finish off the hood, I sewed along the back curve and down the back. 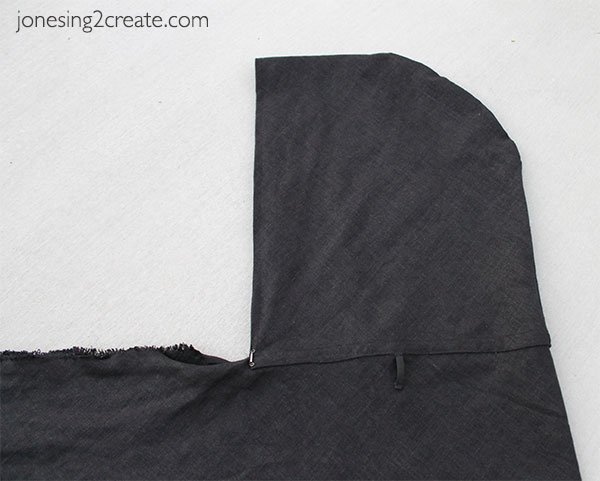 The next step is to sew the hood to the scarf. You just need to line up the middle of the scarf with the middle back of the hood and sew. To help the hood stay on, I also add a fastener at the front and two loops on the side. When you put the hood on, you thread the ends of the scarf through the loops and it helps them stay put and lets you play with the drape of the scarf a bit on the front. 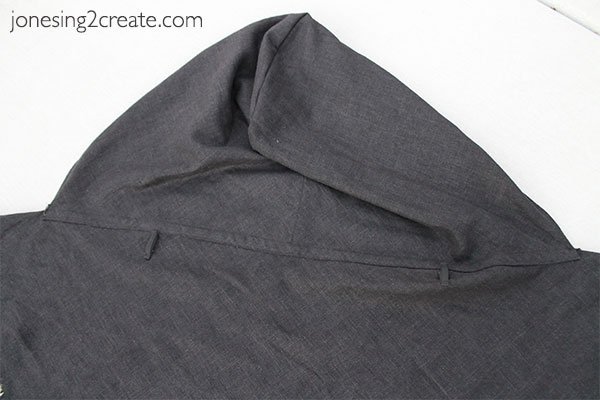 After everything was sewn together, I went over the edges and unraveled the fabric to make it look like Kylo Ren’s. I also added some velcro to the top inside of the hood and the top of the helmet so that the hood would stay in place better. 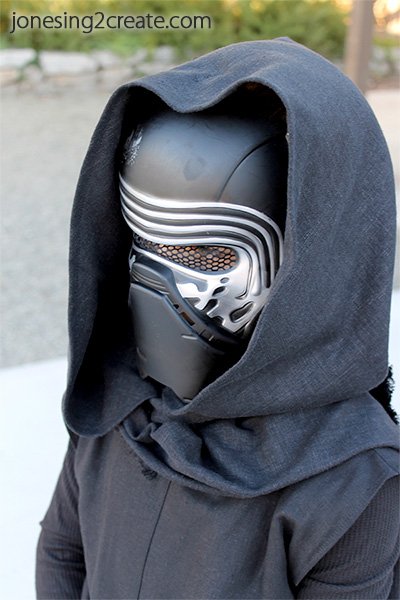 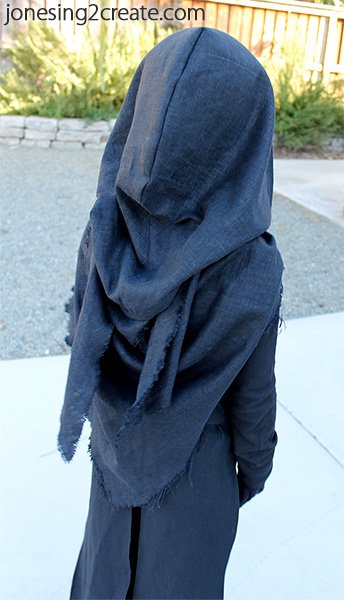 This was so easy to make. First I measured B’s shoulders and they were about 15 inches wide. If you are making a costume for somebody who isn’t as lean, you will want to take in to account the waist measurement too. Luckily B is a bean pole, so it made it easy. I decided that four strips of 8 inch fabric would do the trick to allow for some wiggle room and seams. I also used linen, but less expensive linen since how it hangs wouldn’t be as important and I wouldn’t be roughing up the edges. But I would still recommend using a heavy enough fabric that the ends of the cloak hang and swing around well.

To figure out how long to cut the strips, I measured from B’s shoulders to his ankles. You will then want to add a few inches to account for seams and the curve of the body. For B I cut 46 inch strips. Remember it is always easier to cut some length off then to add it later, so I always add a little more than I think I will need.

To figure out how far down you need to sew the strips of fabric together, you will want to measure from your child’s shoulders to just below where the belt will sit. For B’s costume I sewed down 19 inches. Just line up two pieces of fabric along the longest side and sew down about 19 inches. When you are done, you should have two pieces that are sewed together about halfway down. 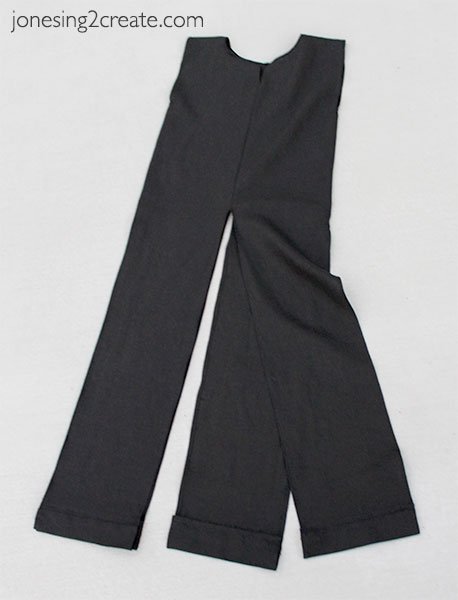 I then lined up the two pieces along the shorter edge and sewed them together. This is the shoulder seam. You then fold it in half and sew down the side, leaving room for the arm hole. I started sewing about 9 inches down for my arm hole and then stopped 10 inches down from that. You will now have something that looks like the cloak, but without a neck hole. So I laid it out, grabbed a large bowl and traced a neck hole using chalk and then cut it out. Tada! Now you just have to try it on to make sure it fits and hem it. 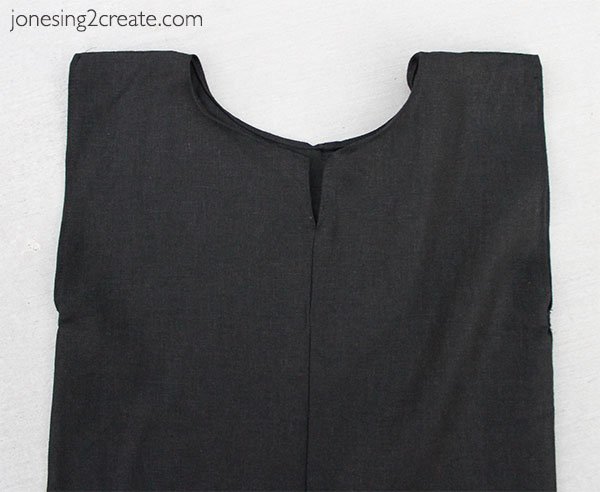 I know there is another layer to the cloak, but for a child’s costume, I thought it was safe to skip it. Plus it is still warm here for Halloween and I didn’t want the costume to be too hot. 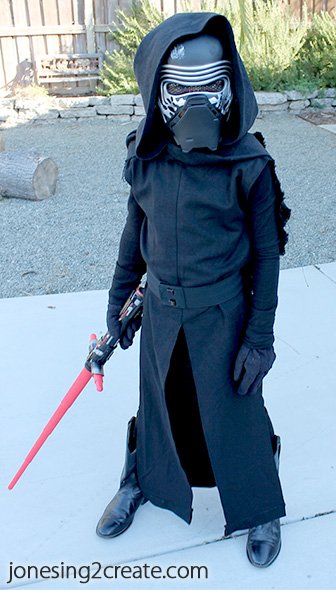 I grabbed the Kylo Ren lightsaber

Under Shirt and Pants

Kylo Ren’s pleated shirt is awesome, but there was no way I was doing pleats. Nope. And I hate sleeves too. A lot. So I bought a pair of black thermals because the ribbed texture was close enough and I figured B could use them as PJ’s in the winter. You can buy them on Amazon, but they are cheaper at Walmart. Because thermal pants have that opening on the front, I sewed it shut so that B wouldn’t have to worry about flashing anybody.

For the gloves, I bought some black work gloves at the Dollar Tree, but if you have some black snow gloves, those would work too. 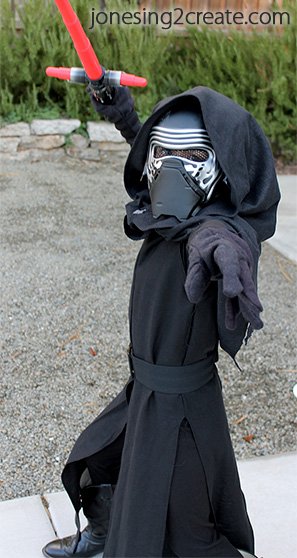 I found the belt at a thrift store and just used a black sharpie to color in the gold buttons. 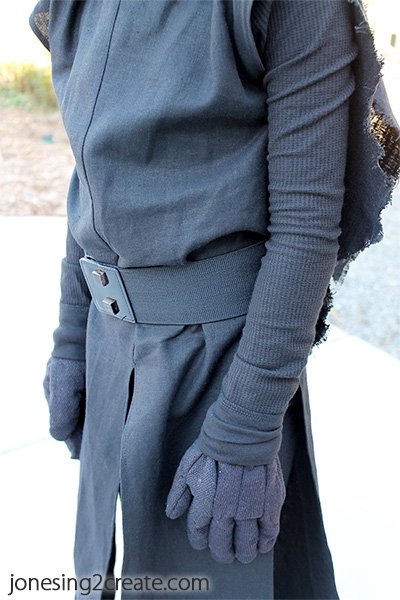 For costumes like this, I have also found that the boots have a huge impact. For B’s Obi-Wan costume last year I bought a pair of boots at a thrift store that his sister could grow into in a few years. That way I wasn’t wasting money on something that wouldn’t be used again. This year I have been to several thrift stores and haven’t found anything, so he is wearing an old pair of my cowboy boots. I can’t believe his feet are almost as big as mine! I am hoping we find something better before Halloween though.

We had so much fun taking photos. B didn’t want to take the costume off! Seeing how excited he was made all the work worth it. I love this little guy so much. He is all heart and always makes me smile. 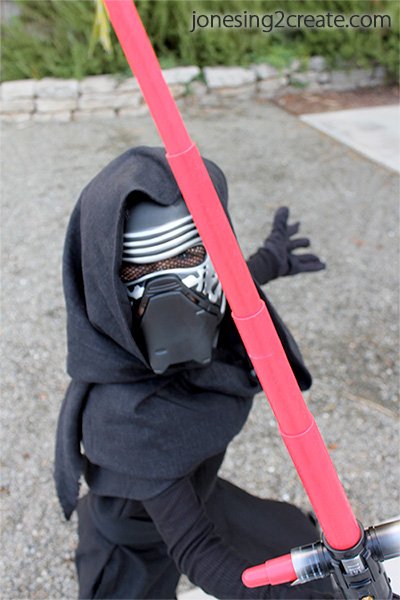 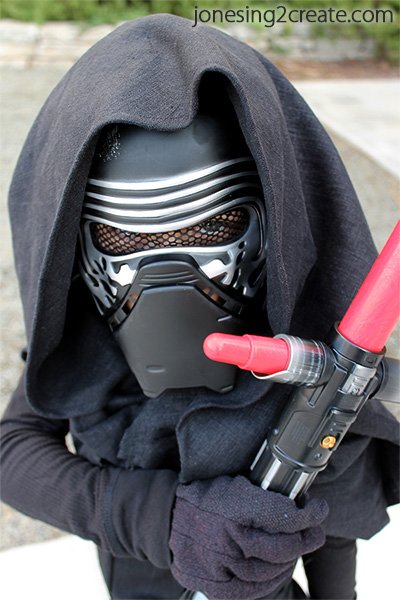 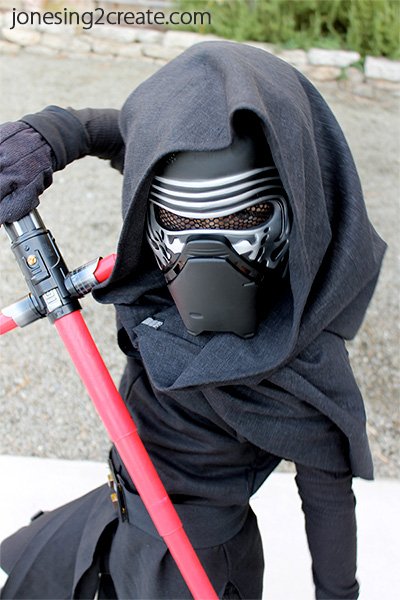