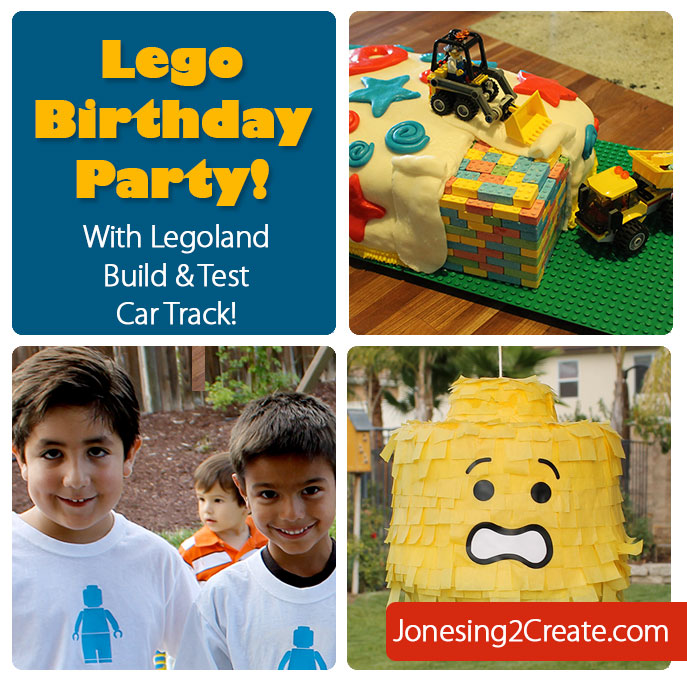 This year we decided on a Lego birthday party for my son, even though he almost had me do another Water Wars Party. It was so much fun last year that he wanted to do it again!

Our whole family is CRAZY about Legos. It is one of my favorite toys ever! Which didn’t help because I was as excited about the theme as my son was. I really, really tried not to go crazy, but I just can’t help. I have so much fun! And I really, really, really love Legos. Did I mention that I love Legos?

Since it was a boy party, I kept the food and decorations pretty simple. Let’s be honest, boys just don’t care about all the little extras—at least mine doesn’t. You get a banner and some balloons and you are good to go. And as long as there is pizza, he is happy.

So I made a front door sign that I totally loved. 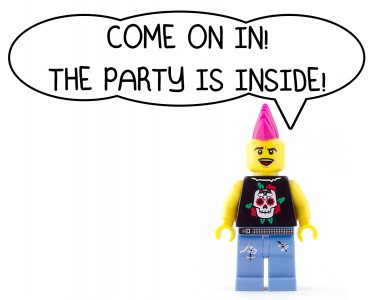 I made a banner that was super easy to do thanks to bigklittleg.blogspot.com! 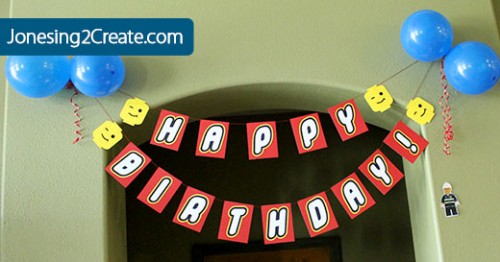 And I also made a sign out of Legos with B—‘s birthday year on it.

I just had to make one of those Lego heads out of the licorice containers you can get at Costco. I just spray painted it yellow and then used my Silhouette to cut a vinyl face for it. I loved how it turned out and it is a great place for him to store his Legos.
Download Lego Silhouette File 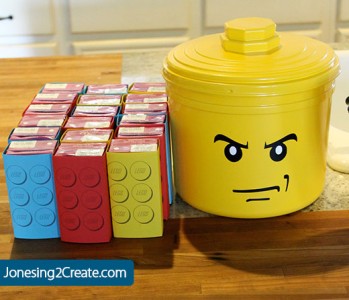 I also made those Lego juice boxes using the template from deliacreates.com

As always, I put a lot more focus on the games than anything else. I am kind of anti-bounce house: they get kind of old and tired. So I have to think of games that will really get the kids’ attention.

Lego Build and Test Track: At Legoland they have this place where kids can build a Lego racecar and then race them to see who is fastest. It is like the pinewood derby with Legos. B— LOVED it, so I decided to do something similar. I bought a bunch of wheels online and built a track using a folding table with one of the sides folded down. I bought yellow painters tape to make the lanes, and used a large piece of black poster board for the bottom so that the track didn’t just cut off sharply at the bottom. I also cut out little racing flags to put along the sides. 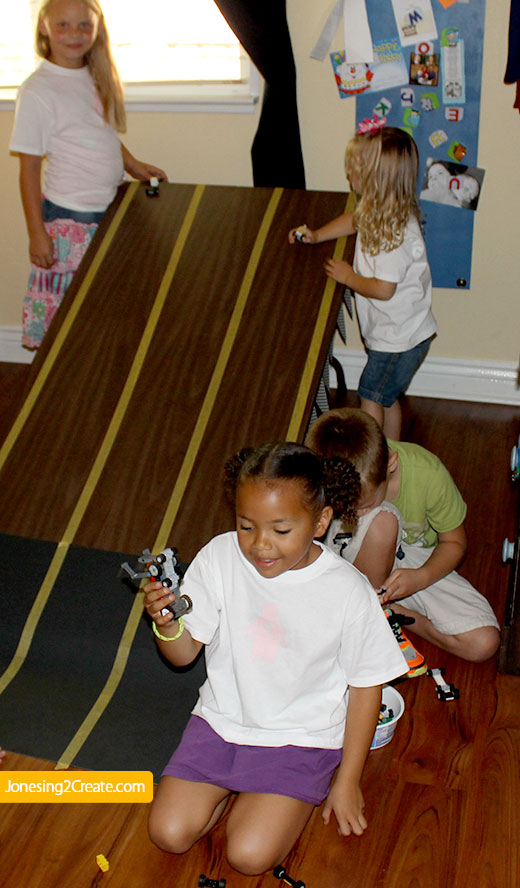 One of the most coveted things at the Legoland Build and Test Track was the Lego map crown that they give to the winners of the races. It is just a stupid park map folded to look like a crown, but B— wanted one soooo bad. Kids love to win stuff, so I decided to do something similar. But instead of a crown, I made gold medals for each kid.

I cut a yellow circle, stapled a red ribbon to it and then glued four gold Rolos on to it. If there was a real Lego gold medal, I am sure this is what it would look like. They were so easy to make and they were a huge hit with the kids. I mean a crazy, huge hit! They were gone before I could even get a photo. It is funny how much kids love to win something even if everybody else is also winning!

Lego Search and Build: This game required almost no prep. I hid Legos all over the room and the kids had to go find them and then build a tower. Whoever built the tallest tower won. Crazy easy and the kids loved it.

I just used the set below and my son loves it. Some of the other sets get too technical, but these kind let him use his imagination a little bit more.

Lego Mixed-up Models: Sit the kids in a circle and give each of them some Lego bricks. Have the kids start to build something by putting together five blocks. At the end of one minute have them pass it to the left. The next kid adds five more blocks and then you pass it to the left again after one minute. Do this a couple of times and then stop to have each child make up a name and story for what they ended up with.

Mega Blocks: We own a ton of Mega Blocks, so I had them set out in one room for the little kids to play with.

Lego Piñata: I saw the cutest piñata on Pinterest and I totally had to make it. I love piñatas and for me they are a staple at any birthday party. When I read that some lady had spent 4 hours on hers, I started to try to think of a faster way of doing it. I was going to use the licorice container and have that be the piñata, but I thought that might be too hard for the kids to break.

Finally I thought I had come up with an easy idea and used one of those large ice cream buckets as my mold for the paper mache. It worked well, but it still ended up taking forever! I don’t even want to think about how long I spent on that thing. But I would still do it again I think. The kids loved it and I actually really enjoyed doing the paper mache. I even had the kids help!

I then just used my Silhouette to cut out the face.
Download Lego Silhouette File

The best part was what I put in the piñata. A while ago I got the crazy idea of filling a piñata entirely with bouncy balls without telling anybody. I really wanted to see what would happen! And I thought it would be fun to watch the kids’ expressions when the contents of the piñata went bouncing all over the place. It was pretty cool. And it was a total hit. 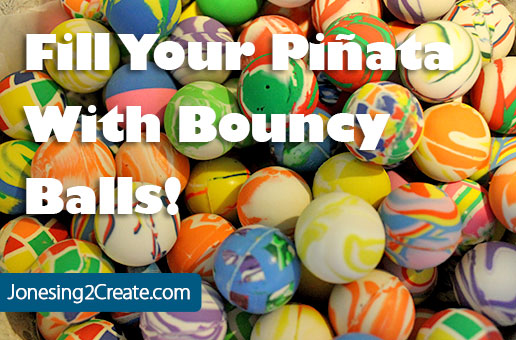 Instead of landing obediently on the ground like normal piñata candy, the balls went EVERYWHERE. It was fun to watch the kids chase them down. And the kids loved playing with the balls afterwards. 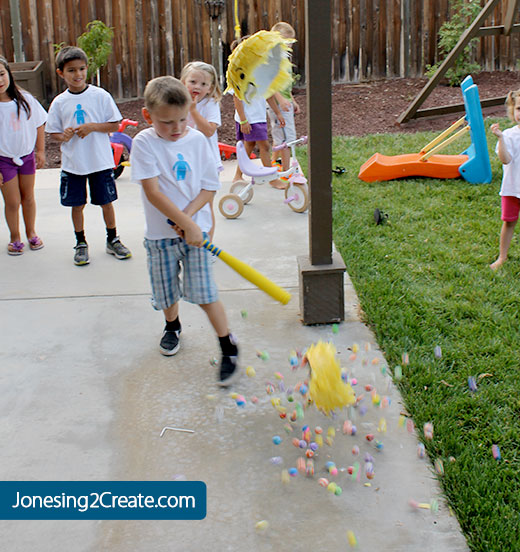 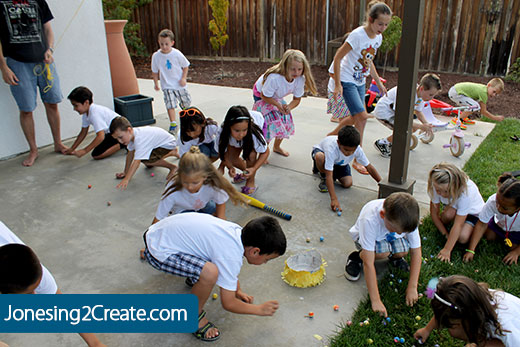 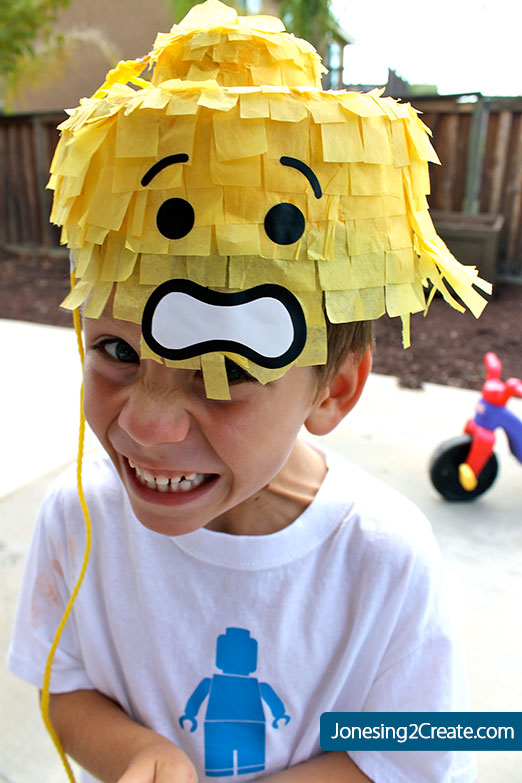 I just bought all the balls online here for a great price!

For the party favors I made Lego t-shirts. They are so easy and cheap. I can make them for about $1.50 each if I buy the Hanes shirt packs and use heat transfer vinyl. (Read more on how to make custom t-shirts)
Download Lego Silhouette File 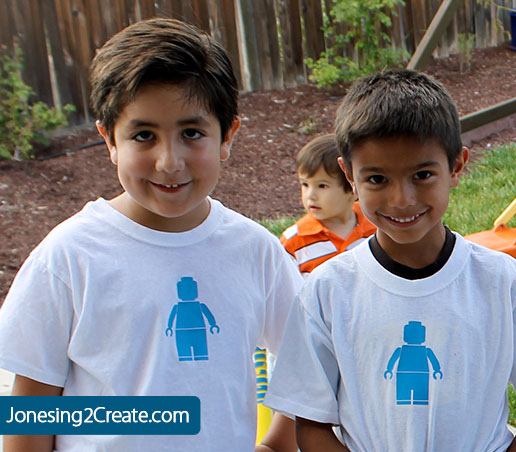 I also made the kids little candy bags with Lego block candy inside. Those actually took me the longest to make and I am not sure it was worth it. Who knew it would take so long to fill all those little bags and staple the labels on them?! The kids really liked them, but I am not sure I would do it again. And it always becomes especially hard when you do favors with each kid’s name on it. If one is lost, or a kid shows up you weren’t expecting, it is always heartbreaking for them not to have one with their name on it. They ended up being a lot more stress than they were worth. 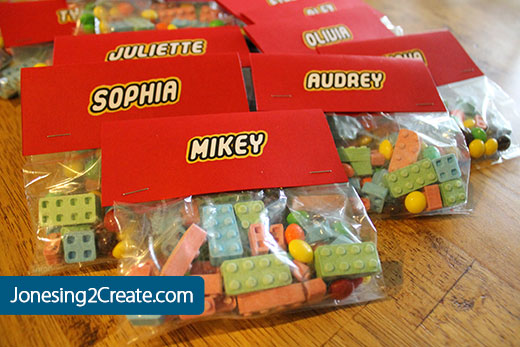 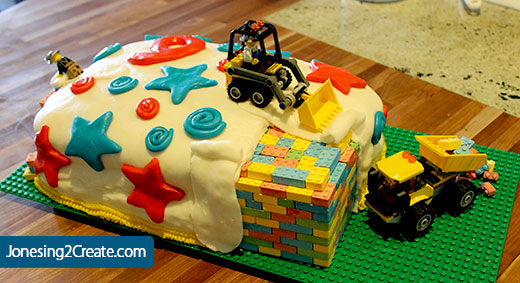 For the cake, I made a Lego cake that looked like it was still being assembled by Lego guys. I had also seen this online and loved it. I only really use fondant twice a year for the kids’ birthday parties, so it is always a little nerve-wracking because I never really actually know what I am doing. But I am finally starting to figure out how to get the big piece of fondant over the cake without tearing. I figure by the time I do G–‘s I will have it down.

Luckily I have figured out how to hide the rough spots on the fondant with embellishments! I always use a marshmallow fondant that is loads easier to make and tastes lots better. But some time I would like to use the real stuff just to see if it is easier to work with. 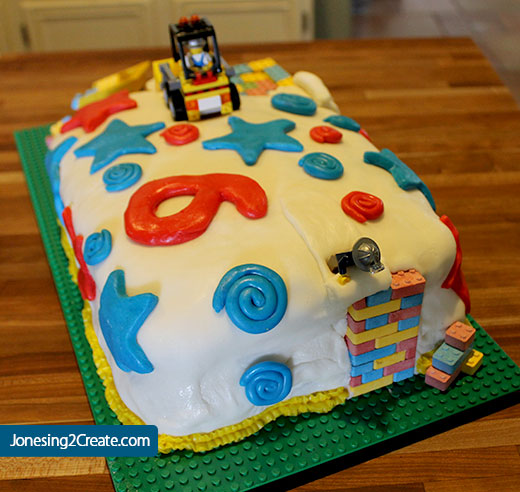 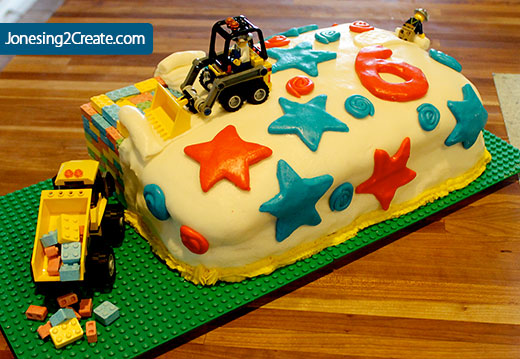 For the Legos, I cheated and used some Lego candy instead of hand making each Lego out of fondant. It looked pretty good and saved me a ton of time! 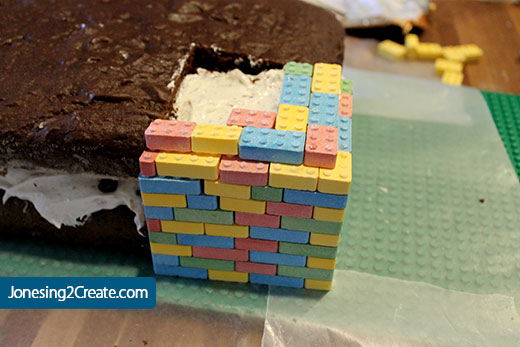 I used these and they looked great!

And then I used this Lego construction set for the decorations.

What was fun about this party was that a lot of the stuff I used and bought my son has been able to play with later. I hate spending a bunch of time and money on stuff that is going to just be thrown away. So the Lego sheet cake platter, the cake decorations, and the Lego wheels have all just been part of his birthday present!

I had so much fun! It is wonderful getting to plan stuff and then watching all the kids get so excited. I really enjoyed myself, even though I felt like I had been hit by a bus the next day. I was sooooo exhausted! We are getting too old for this! But what made it so worthwhile was how wonderful the kids were. Sometimes we bend over backwards for our kids and they just seem oblivious and it makes you never want to do it again. But B— was so sweet. When I took him around and showed him some of the stuff I made for him, he would lean over and kiss it! What a cutie! I think his favorite was the cake!

You can use these to make toppers for your cupcakes or crayons for your goodie bags!

Cute and fast way to add a little Lego to your cake!

Don’t stress about the goody bags, they have already done the work for you!