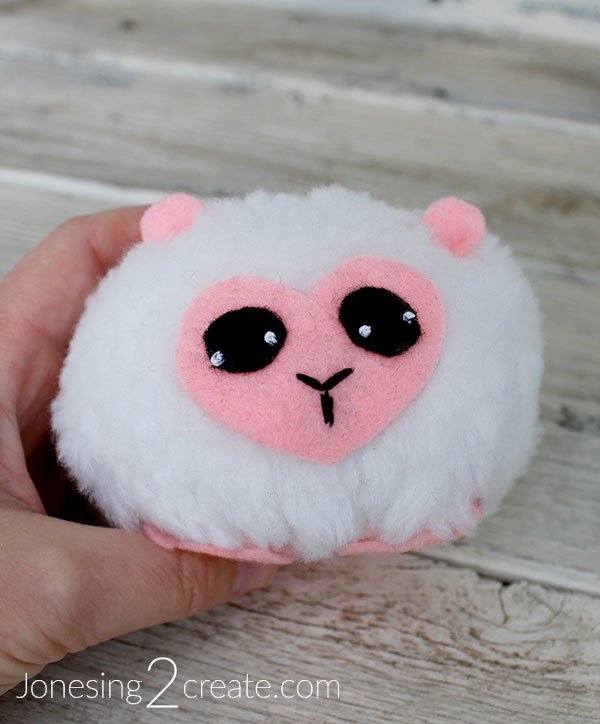 Who wouldn’t want a pygmy puff of their very own? They were a definite favorite when we visited the Wizarding World of Harry Potter at Universal Studios Hollywood this summer. Although $15 isn’t a bad deal for a stuffed animal, we decided to wait and make it ourselves. And I am so glad we did. This pygmy puff kid craft was a great way for my kids to learn how to use a needle and thread. 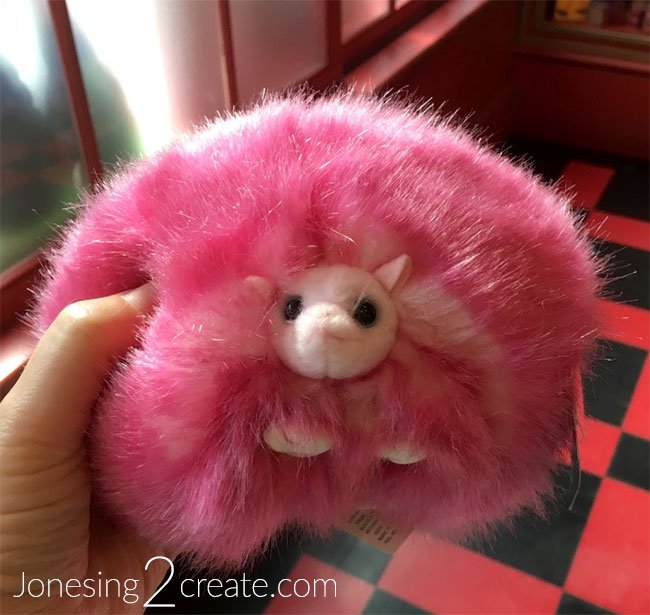 Out of all the homemade Harry Potter souvenirs we did, this pygmy puff kid craft was one of my favorites. The kids started out by saying that there was no way they could make this, but as they slowly saw their pygmy puffs come to life, they got so excited!

You can make this pygmy puff kid craft without a sewing machine and very little stitching. They are crazy easy! Perfect for kids! But these were so much fun that they got me thinking of how to do a slightly more complicated version. Once I get all the details down, I will be posting a tutorial on that as well.

1. Pick your colors. While Ginny Weasley might have liked the pink pygmy puff, my boy decided to go with a blue one and Ladybug went with white. The fuzzier the fabric, the better.

2. Cut a large circle out of your fabric. We used a 9-inch lid from one of those big ice cream tubs as the template. If you want your pygmy puff to be bigger, you can trace a larger circle. We placed the lid on top of the fabric and the kids traced around it with a marker. Then they cut the circle out. The circles weren’t perfect, but luckily this project isn’t too fussy and it didn’t matter.

3. You will need a needle with some strong thread. We used upholstery thread, but you can also use fishing line. You just want to make sure the thread is strong so that it doesn’t break easily. The kids threaded their own needles and I showed them how to stitch around the circle. The stitches can be pretty big and don’t necessarily have to be even, but you will want to make sure they stay along the edges. My kids have never used a needle and thread before and were able to do this without too many problems.

4. Once they have stitched all around, you will want to pull on the two sides of the thread to gather in the edges of the circle. Once the sides are gathered up into a kind of bowl shape, you will start to stuff your bowl with poly-fil. 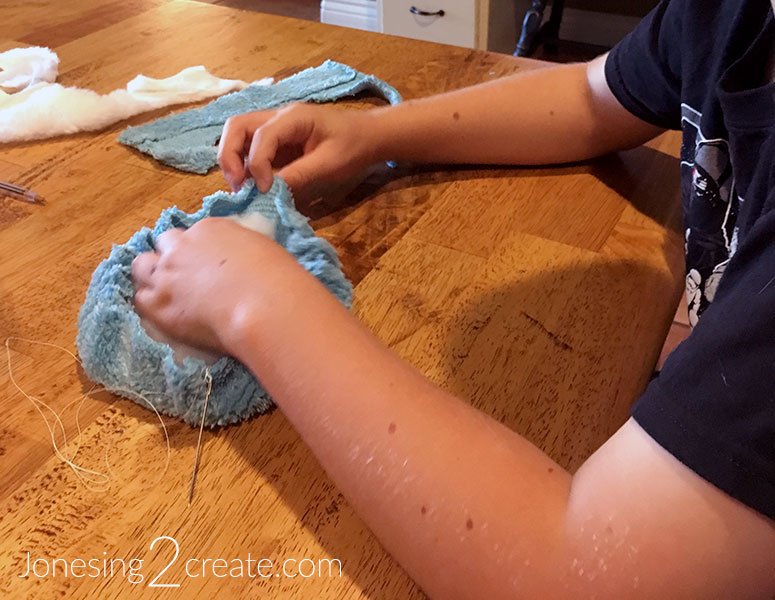 As we put more filling in, we gathered the thread tighter and tighter until we had a well-stuffed ball and the top was almost closed. I then helped the kids tie the threads off and stitched back and forth around the hole a little to reinforce it. 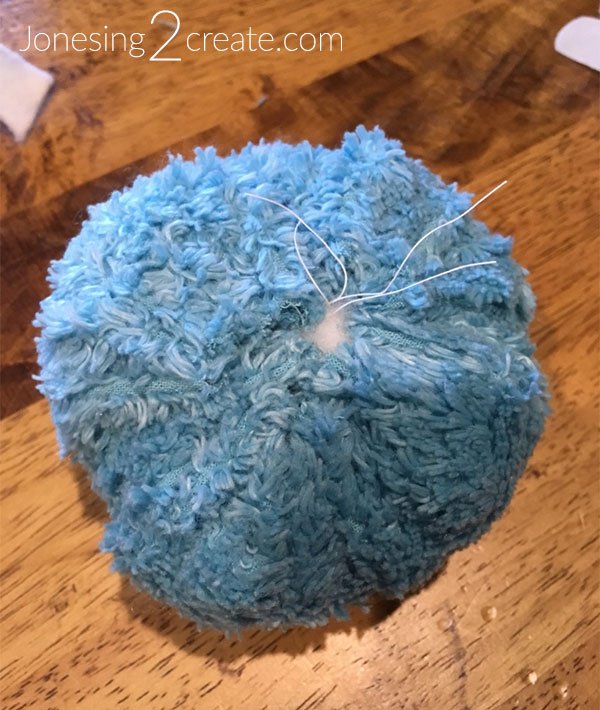 5. For the face, we used felt and cut out a heart shape with a round bottom and then two black circles. I helped a little with the smaller pieces. On the face, you will want to stitch on the mouth using embroidery thread and glue on the eyes. Ladybug loves the white dots on the eyes, so I made those with a French knot stitch, but my boy thought his looked more masculine without it. We then hot glued the face on the front. I helped with the hot glue, but you can also use craft glue. You just have to wait longer for it to dry. For the ears, we cut out two rectangles and rounded the edges on one side. I then pinched the ears together a little at the bottom to give them some dimension and helped the kids stitch them on. The ears were a little trickier. 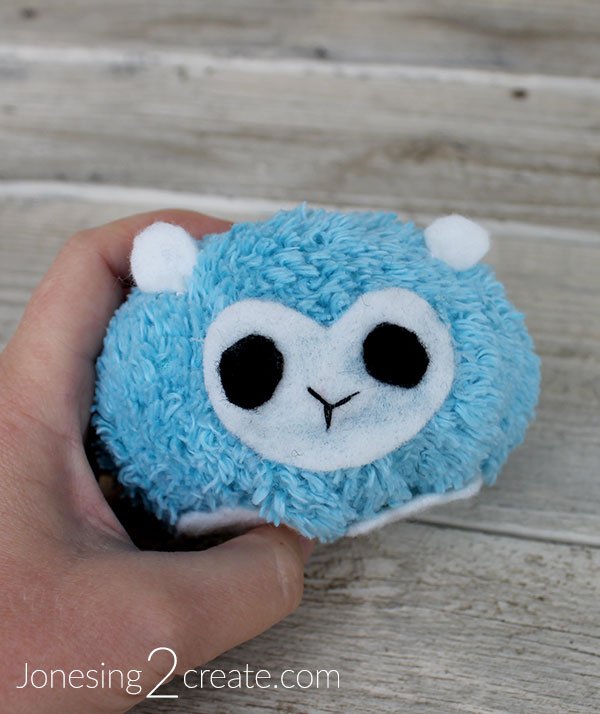 6. For the feet, I folded a piece of felt in half and cut out a long oval shape with toes. When you unfold it, the feet should be connected via the fold. We then hot glued the feet over the stuffing hole. Easiest pygmy puff kid craft ever! I loved that my kids could do most of this by themselves. 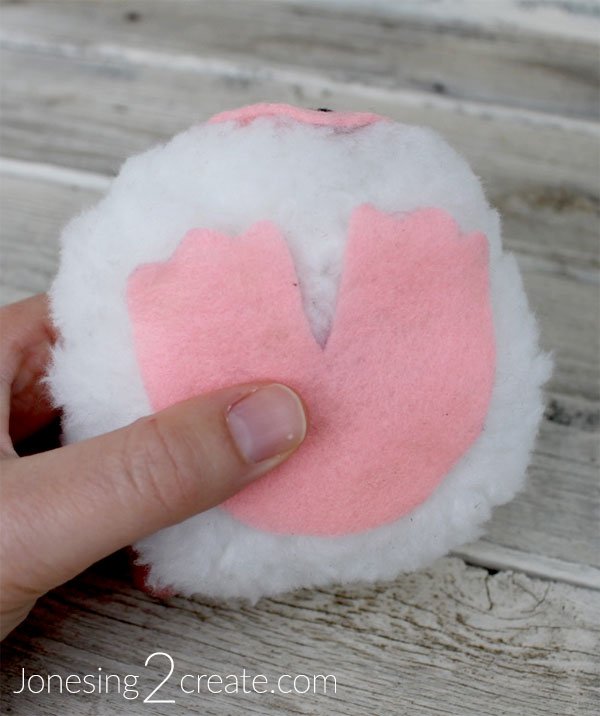