Recently, I played this game as an ice breaker with a bunch of adults and realized that it would be perfect for a church activity (like young women’s, combined mutual, or Relief Society) or as a Family Home Evening game. I love that it is easy to set up, lets everybody participate at the same time, and it totally helps people loosen up and feel more comfortable around each other. It is even good for the more introverted members of the group because they are never put on the spot in front of everybody else.

The game is basically a combination of Pictionary and the telephone game. Most of us have played telephone as kids. Somebody whispers a message in another person’s ear, who then passes it along to the next person and by the time it is at the end of the line, the final version is totally different from the original.

With Telephone Pictionary, somebody starts by writing a sentence on a piece of paper and then the next person has to draw a picture of the sentence. Then the next person has to write a sentence interpreting what the picture is without looking at the original sentence. After a few rotations, you end up with a ridiculous series of pictures and sentences. There is a similar game called Telestrations that you can buy, but I like making my own because it is fun coming up with your own sentences and you can expand things to include more people if you need to. The game is also sometimes called the Sentence Game.

How to Play Telephone Pictionary for a Church Activity

1. Make a small 9-page booklet for each person in your group by cutting up some paper into eighths and stapling the pieces together. You can also make the booklet shorter or longer, depending on how many people you have or how long the game should last, but you want an odd number so that the game ends on a sentence, not a drawing.

2. At the church activity, hand the booklets out and have everybody write their name at the top by the staple. 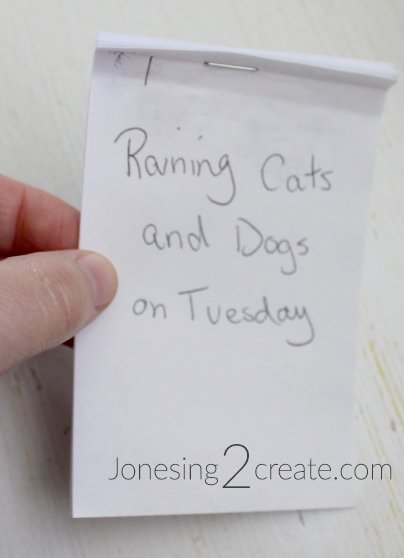 3. Then have everybody write a sentence on the cover. It should only be one sentence, not a paragraph. It can be something silly and abstract, or song lyrics. For example, “The ginger cat refuses to eat white mice” or “I like to whistle to my dog while walking on rainbows.” One of my favorites has been “You can neither prove or disprove that the giant spaghetti monster exists.” If you want a church tie in, have people start off by writing a favorite scripture or line from a hymn. Be careful not to share your sentence with others!

4. Then have everybody pass the booklet down to the next person, who then has to draw a picture of the sentence. When drawing, you can’t use numbers or letters, but symbols are fine. You can also break the picture up into parts to convey parts of the sentence.

6. Continue passing the booklet down, alternating between sentences and drawings until you get to the last page and you end with a sentence. The best part is taking some time at the end to share the pictures and sentences. It just goes to show that sometimes a picture is not worth a thousand words. 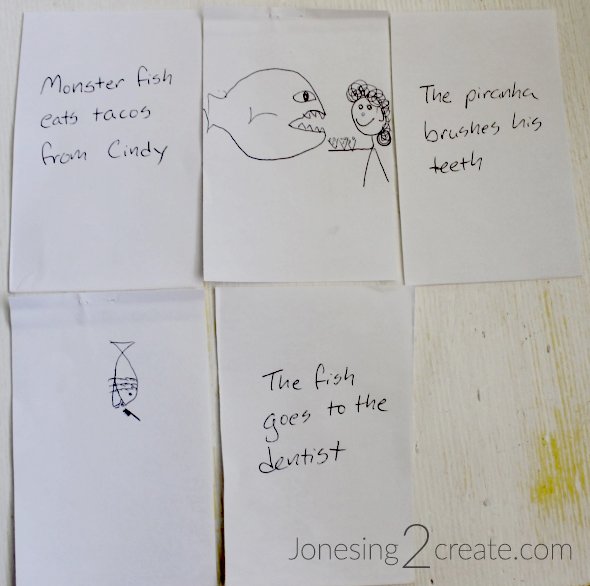