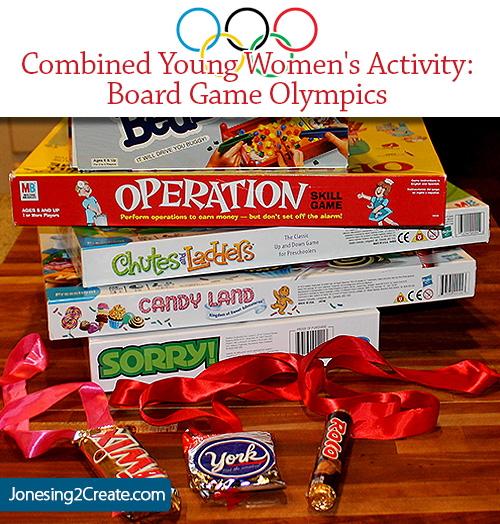 Now that I am working with the young women’s program at my church expect to see lots of ideas for young women’s activities! I like to keep things fun, but simple, so many of them will be things that you can put together quickly.

A few weeks ago I decided to play off all the Olympic fervor from the 2014 Olympics and we held our own little Olympics…the 2014 Board Game Olympics! It was a lot of fun, the competition was fierce, and there was a lot of goofiness! It was also a great way to have the girls mix with other girls who they might not talk to as much.

And it was such an easy young women’s activity to set up!

Rules for the Board Game Olympics

1) Pull together enough board games so that you have at least one game per four girls. We had about five tables with four girls each on it. But make sure that some of the games allow for more than four players so that you have some flexibility. For the number of girls we had, we had to squeeze five onto one of the tables to make sure there was room for everybody.

Make sure the games you pick are entertaining enough that you can play them over and over again without going crazy. I brought Candy Land because I thought it would be fun and nostalgic (and with little kids I didn’t have a great selection to choose from). But a few of the girls ended up getting stuck at that table and by the end of the night they were so DONE with Candy Land. Who can blame them? You also want to make sure the rules are simple. If somebody has never played the game before, you want them to be able to pick up the rules quickly. Some of the favorite games were Apples to Apples

2) Set up one game on each table with the needed chairs.

3) Explain to the girls that you will be using “King of the Hill” rules. At each table, those who are winning at the game will move up towards the top table and those who lose will move down. The three medalists will be those who end up at the top table at the end of the night. Designate the order of the tables from top table down to the bottom table.

4) I wanted the placement of the girls at each table to be fair, so I printed out a crossword puzzle for each girl. They had five minutes to see how much they could fill in. Those who had the most words were placed at the top table and then down from there.

5) I brought a timer and gave each table ten minutes to play. At the end of the ten minutes whoever was winning would move up and whoever was losing the worst would move down. The other two would just stay where they were. However, I found that a lot of girls got stuck at the same table the whole night. So you might also want to try having the top two girls move up and the bottom two girls move down. It might also take some of the sting out of losing if you aren’t alone!

6) We kept playing at ten minute intervals until we ran out of time. After the last ten minutes, I found out who was winning on the top table, who was doing second best, and then third best for that last game. Even if somebody had been at the top table all night long, it didn’t matter. Just that last game did. I did it that way because it was hard to keep track of who had actually won the most games at the top table.

7) I then awarded gold, silver, and bronze medals to the winners while they stood on chairs. I also found the Olympic theme song, Bugler’s Dream, to play while awarding the medals. I made the medals with candy bars and used a Twix for the gold, York Peppermint Patty for the silver, and Rolos for the bronze. I just hot glued them to some ribbon.

It was a lot of fun and would also make for a good combined young men’s and young women’s activity. And I loved how EASY it was to do!