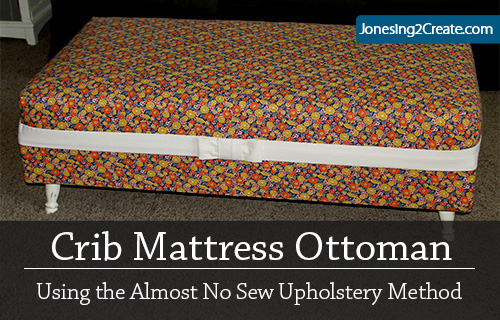 I’ve always wanted to make my own ottoman, but the price of foam is absurd! So when my little girl grew out of her crib I stashed her crib mattress in my home studio and saved it for a ridiculously long time until I finally had time to do something with it. But my kids didn’t mind. They liked to pull it out and use it as a trampoline.

My goal was to make this thing using as little money as possible, but I did have to buy some lumber to make the base. Luckily Lowes cuts it for you there so I could fit it all in my car. I had measured the mattress at home and just had them cut me out a piece of plywood that was the same size. I was able to cut the 2×4 with my miter saw at home.

And this is why I love my Honda Fit. I even have my daughter in her car seat in there! It is amazing the stuff I can haul in here. It makes me feel like Mary Poppins with a car. I have even managed to move a kitchen table!

To make the base for the crib mattress ottoman, I just made a box and screwed it all together. I then reinforced the corners with some blocks of wood. This is also where I attached the legs of the ottoman. I was able to get them off another ottoman we had that was falling apart. 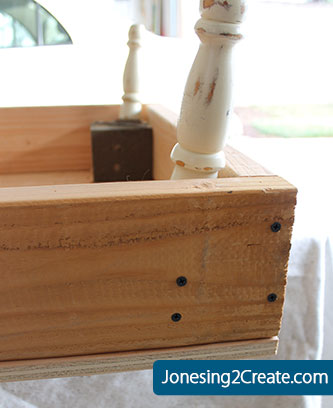 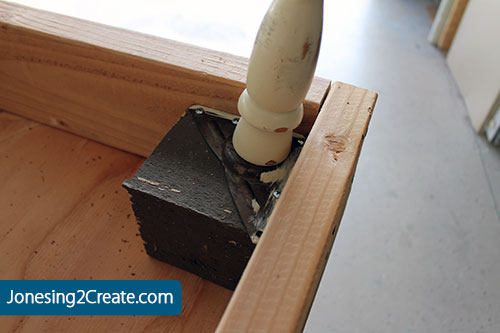 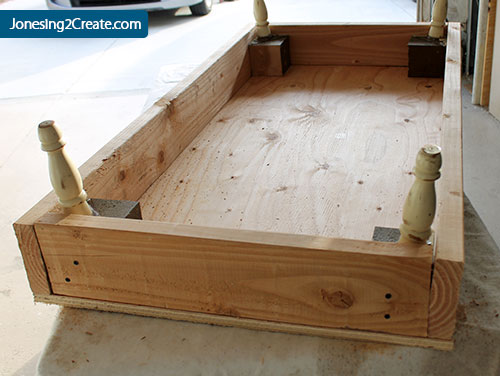 Once I had it all built out, I sanded down the edges on the side so that they weren’t so sharp and so they would match the rounded corners of the mattress. I then put crib mattress on top and covered it with an old twin sized mattress pad. I love to use these for upholstery because they don’t tear as easy and they are cheaper than batting. I will even snag some at garage sales and thrift stores when I get a chance. They are also great to use for quilt batting.

I secured the pad over the mattress by folding in the sides and stapling it down on the underside of the frame. I made it real tight so that the mattress wouldn’t shift around. I then cut off the excess around the sides. 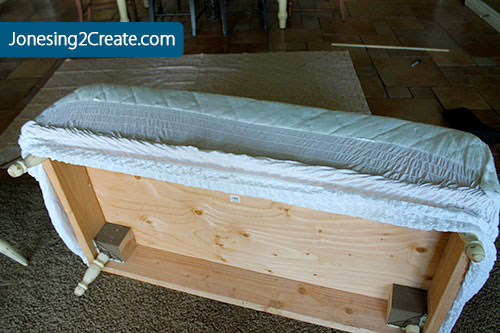 I spent more than I normally would on some upholstery fabric, but ended up hating it. Ironically after looking everywhere for something I did like, I found some fabric stashed away in my studio that I LOVED. It wasn’t quite the right size, but by cutting it into three sections, I was able to piece it together. It also made it so that there are three seams across the ottoman. It gives it some added dimension without having to worry about tufting it. I imagine that tufting through a crib mattress could be tricky. 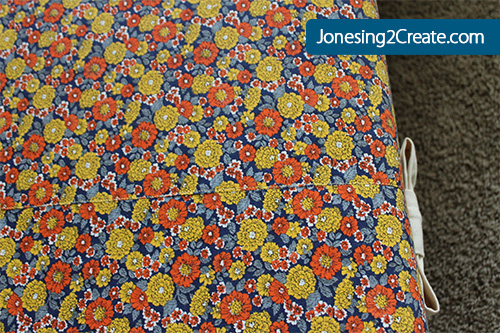 To upholster it I used the almost no sew method I explain in my other tutorial. I don’t know why, but this photo makes me think of cow tipping. 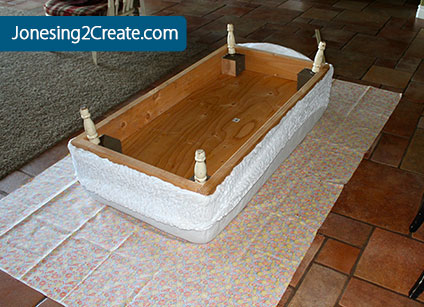 But watch out for that staple gun! 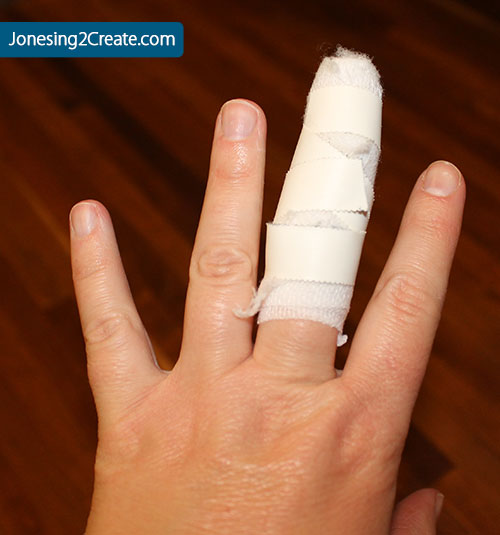 I was stapling the fabric over the base with a staple gun and managed to put a staple through my finger. Ouch! One end of the staple even went all the way through my finger! It was funny because it didn’t hurt that bad and the first thing I remember is being surprised by how little it hurt compared to how it looked. I quickly pried the staple out and thought, “I can handle this. I don’t think I even have to go to the doctor.” And that is when I started to get really, really lightheaded. Even though it didn’t hurt that bad, I think the image of prying the staple out of my finger was just too much for my vagus nerve.

The kids were outside playing and had started to argue. I called B– in to get the phone because I could feel myself starting to fade. I had my head between my knees and my ears were ringing loudly. Sweat started to pour down my face. I could tell that things were going downhill fast. I wasn’t sure how long I was going to be out, so I wanted to call my husband so that he could be on his way home.

I was trying to stay conscious while asking B– to get the phone, but he thought I was saying “foam” and kept trying to hand me batting (or foam) from the ottoman. He finally figured it out and got the phone for me. I knew that if I walked over to get it myself I was going to pass out. At about this time G– announced that she just had a potty accident. Great. B– helped direct her to the bathroom and then decided the best thing he could do was keep her distracted. He kept saying, “Get in here and play Legos with me! It is our only hope!” G– kept asking me if I was going to die. My kids have a knack for hyperbole.

On the phone I remember telling my husband to come home and then the rest got kind of fuzzy, but I did manage to maintain consciousness. Luckily he works close so he got home fast. But by the time he got home I was doing pretty well. Afterwards I had to laugh, but I have been a little leery of the staple gun ever since. The staple went in by the knuckle, so for the first few days I would get shooting pain if I tried to bend my finger at all. It is almost all better now though and just gets stiff every now and then. At this point you are probably wondering why you are paying attention to a tutorial written by a woman who stapled herself. Good question.

Anyway by the time I had finished stapling the ottoman I noticed a bit of a bump on the edges. Unfortunately the mattress has round corners and the frame does not. I had tried to remedy this by sanding down the corners a bit before I upholstered it, but obviously I didn’t do it enough. If you are still reading, what is wrong with you?!?! Isn’t it obvious I have no idea what I am doing? 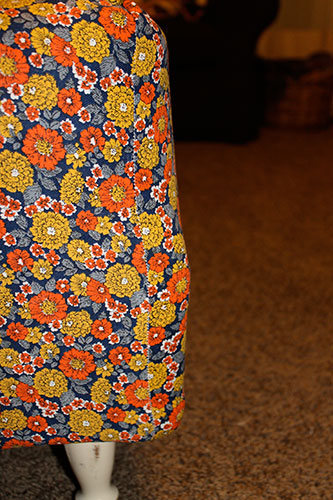 Anyway, I wasn’t about to take it apart, so I made a little band to go around it to camouflage it. I then added a little bow on the front. I hand stitched the band on so that it stays on right. Turns out I love it even more with the band than without. Sometimes our mistakes push us to do something we wouldn’t have otherwise and it actually turns out better! But if I make one of these again I am going to work harder at making the corner of my base match the rounded corners of my mattress better. 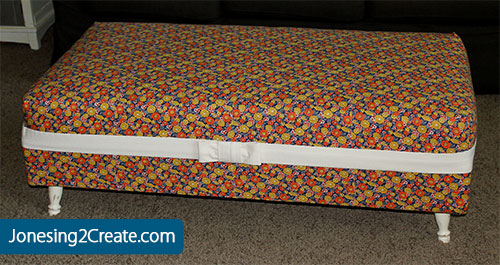