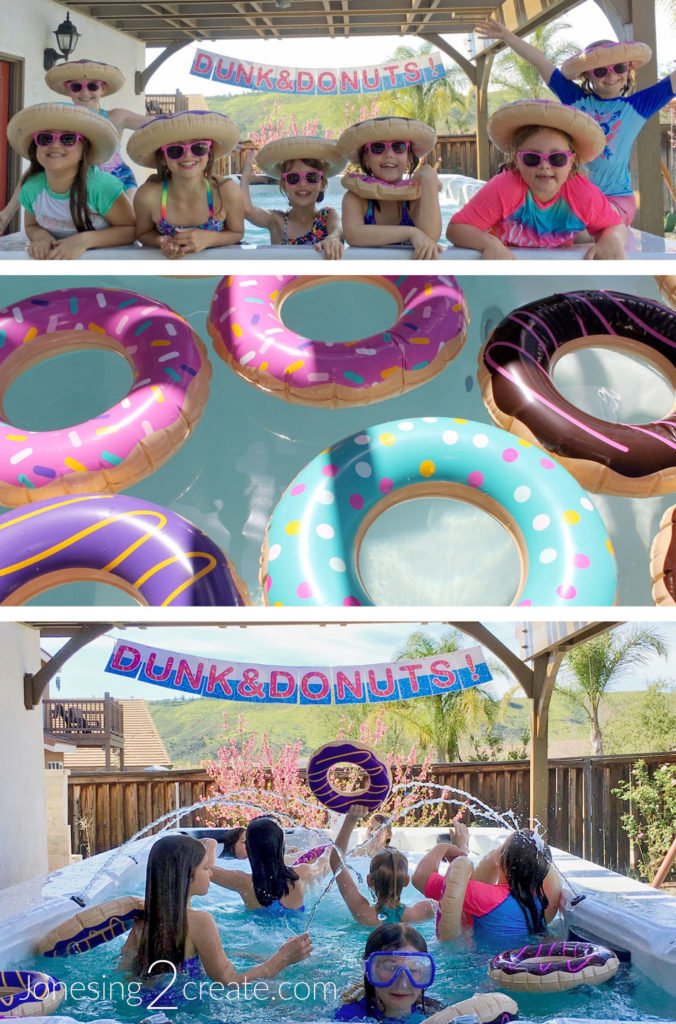 This year all my Ladybug’s dreams came true with a Dunk and Donuts Pool Party for her birthday. She loves water and donuts almost as much as she loves cats and babies. Ladybug doesn’t like cake, so a donut with a candle in it was exactly what she wanted! The party was all about taking a dunk in the pool and eating lots of donuts! 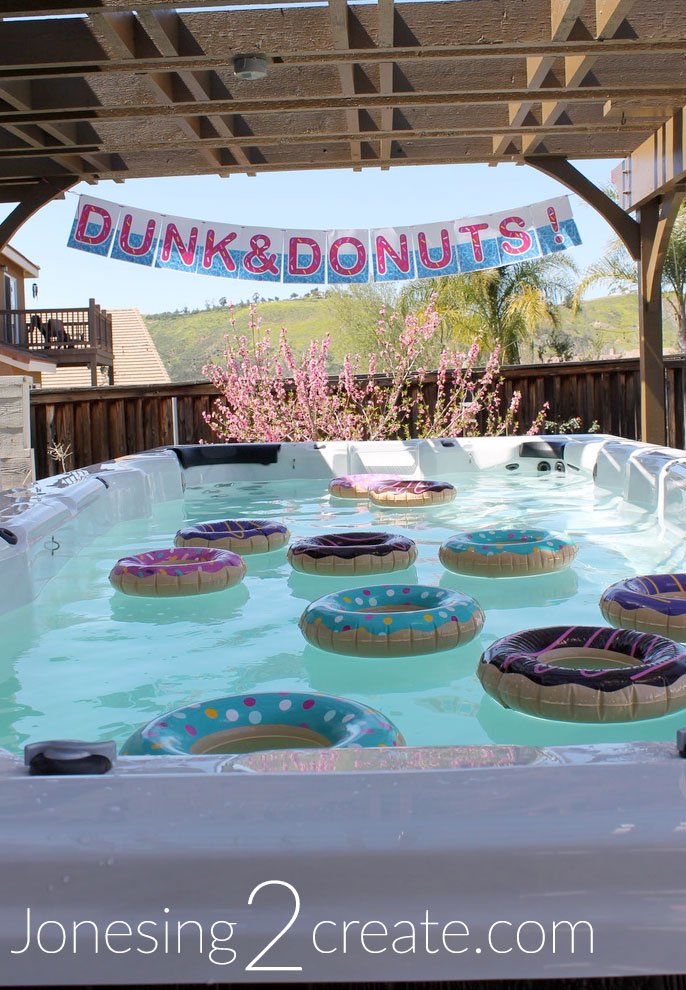 Ladybug has been dreaming of a swim party for years. But she is a winter baby and we don’t own a pool, so the cards were stacked against her. But this winter, we decided to buy a swim spa. It is basically an oversized hot tub with a swim current on one end. We can swim it in all year because it doesn’t cost a fortune to heat. And the current basically turns it into a swimming treadmill.

With summer coming, you don’t even need a swim spa. You can throw a Dunk and Donuts Pool Party at any pool!

Ladybug helped with all the planning on this one and I love that she is now old enough to be my partner in crime. And she is so clever! Originally, I was going to do a mermaid party, but she told me that it was too babyish. So we put our heads together and came up with the Dunkin Donuts theme. She was so excited!

Since it was outside, I was able to keep decorations to a minimum and invested most my budget on fun donut floaties. They looked great in the pool and the girls had so much fun with them. 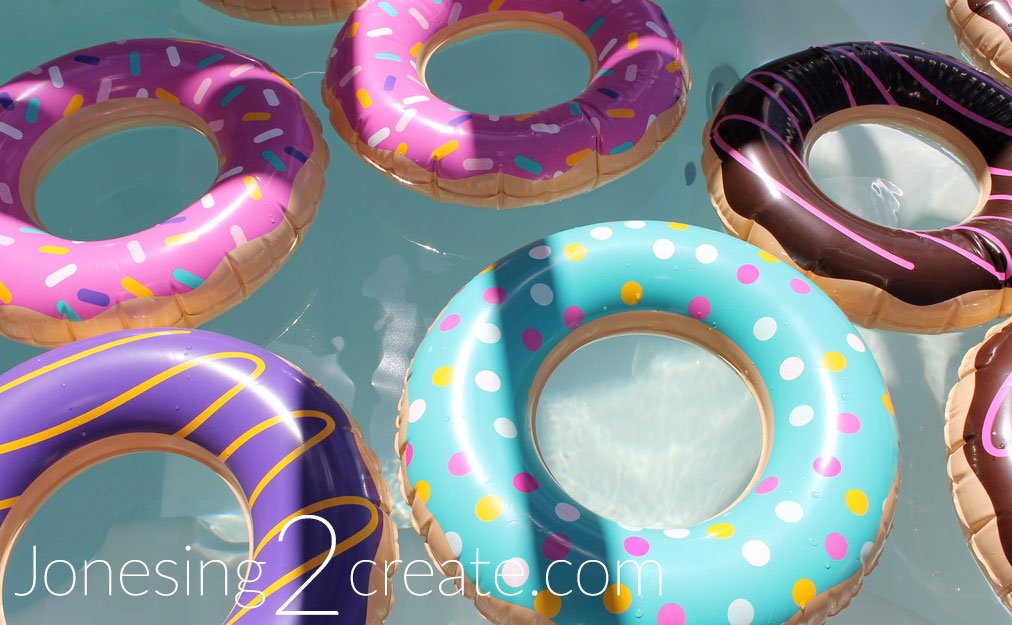 Turns out you can do all sorts of things with a donut floatie. These were probably one of my best purchases. The girls absolutely loved them! And they got so creative! 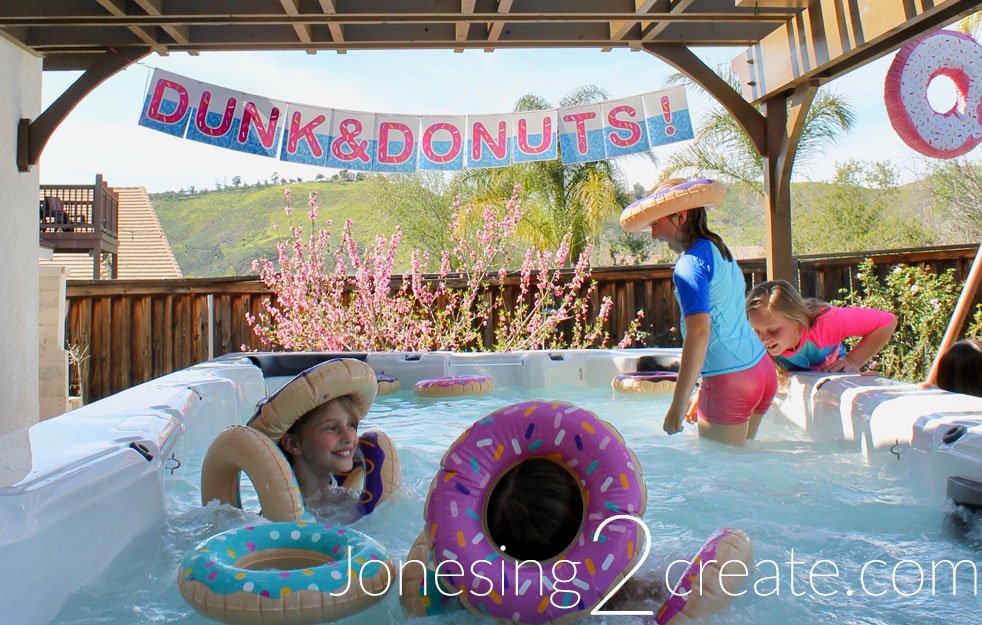 I also got a giant donut floatie and hung it from the patio. It was too big to put in the swim spa with so many girls in it, but it has been a really fun toy for the kids when there are less people in the spa. I love decorations that you can reuse. 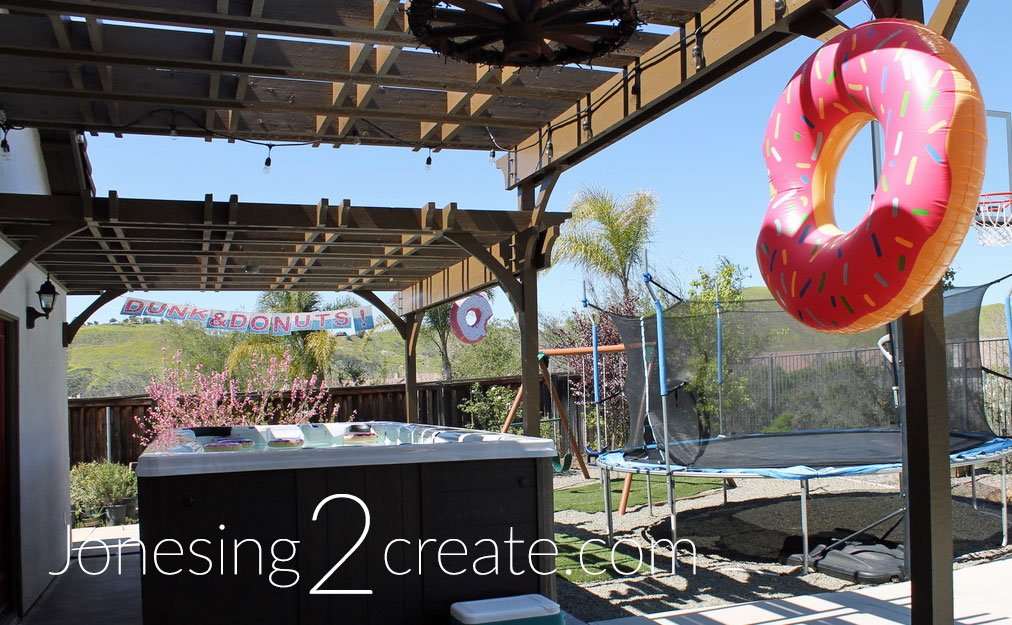 To pull in the theme, I made a cute banner that said “Dunk & Donuts” to hang over the pool. 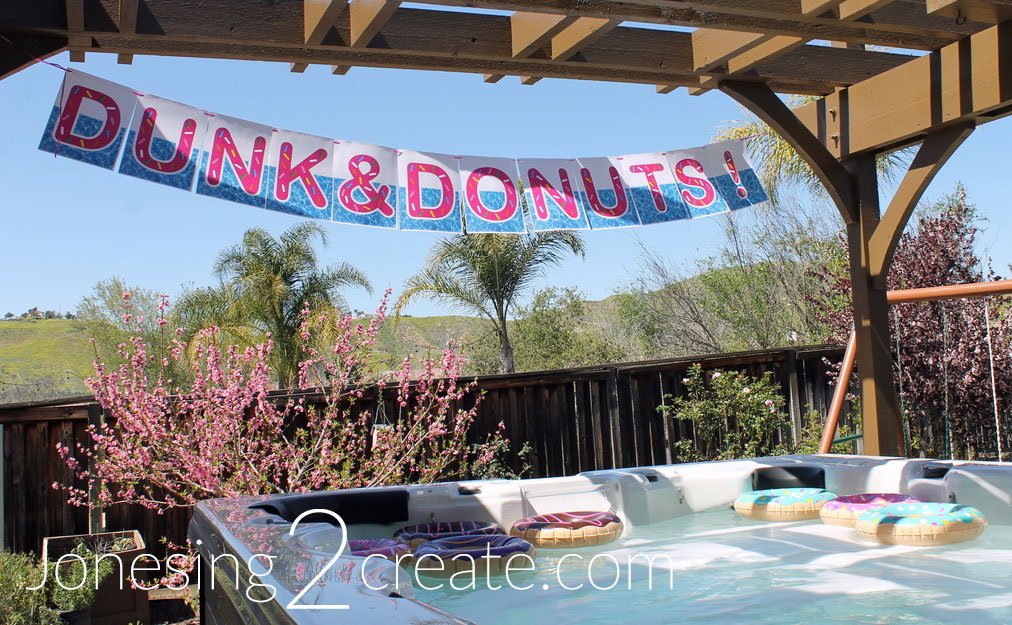 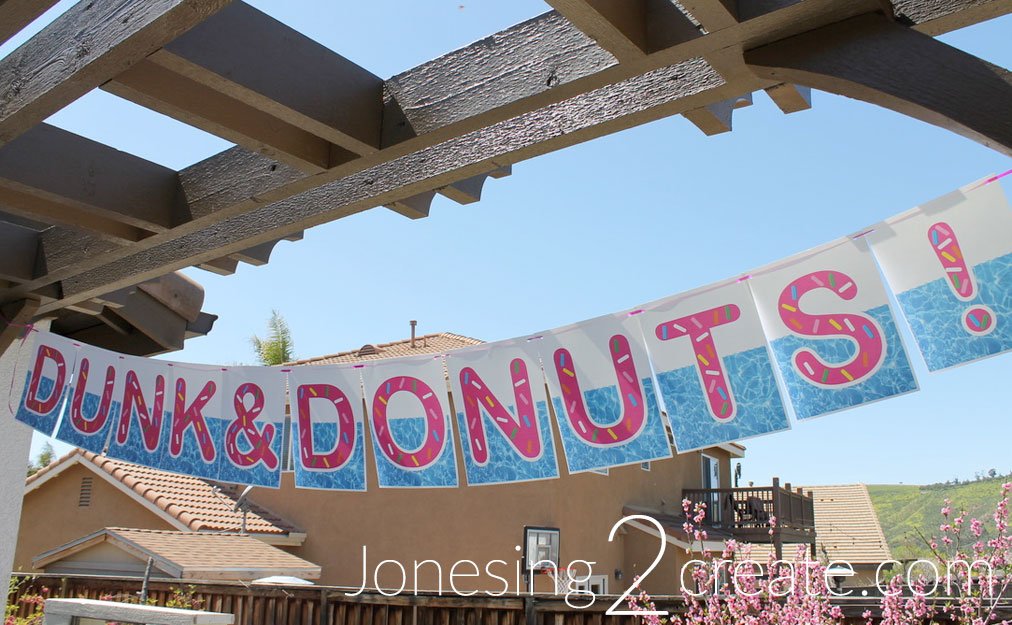 I also made a cute little door sign to match. 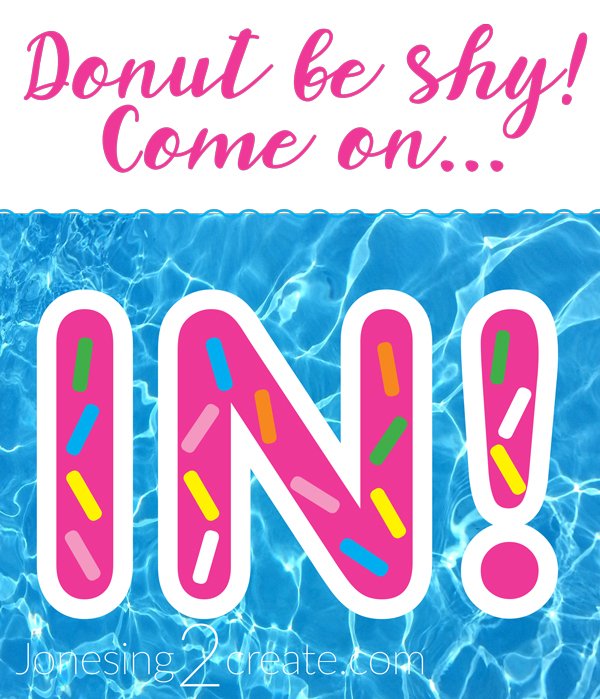 And I bought a fun donut balloon banner that matched the theme. 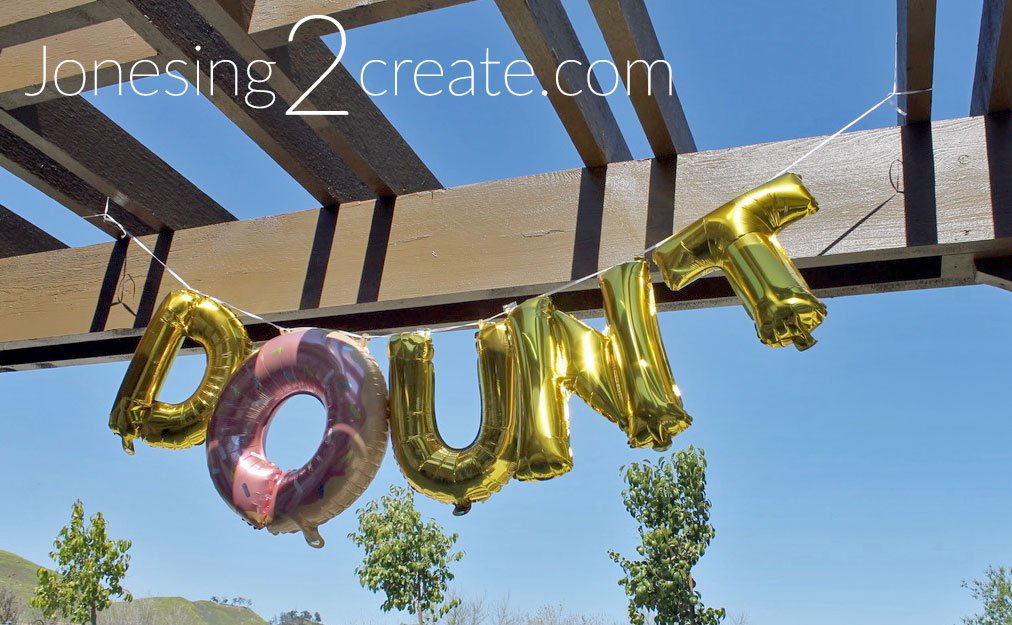 If you know me, I always spend the most time on party favors. I love swag! So each of the girls got to pick a donut floatie to take home. I also got them sunglasses with donut sprinkles on them. I wasn’t too happy with the quality of the sunglasses, but they were still fun and the girls were happy with them. And they were cheap.

Then I made a swim suit coverup t-shirt with a glitter vinyl iron donut that I made. It was so cute watching the girls run around in their matching outfits! In retrospect, I wish I had bought them all matching flip flops too! I also let the girls take home their monogramed milk bottles from the donut food table. 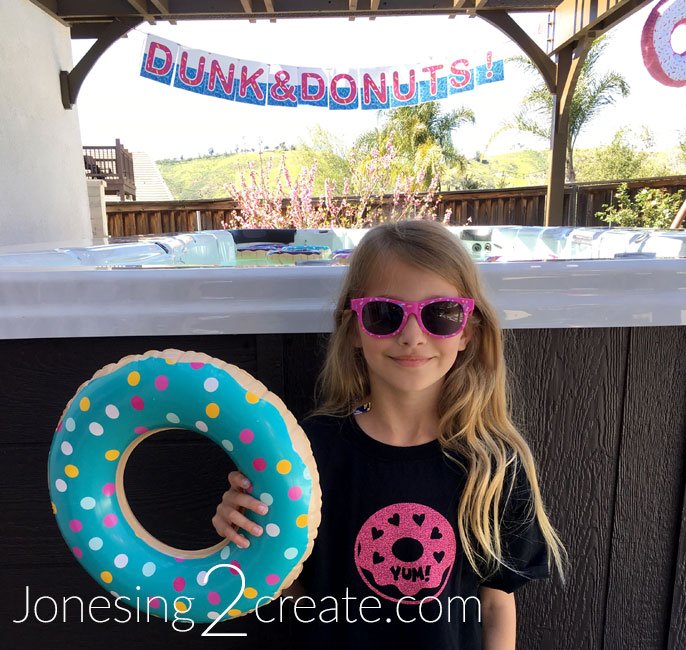 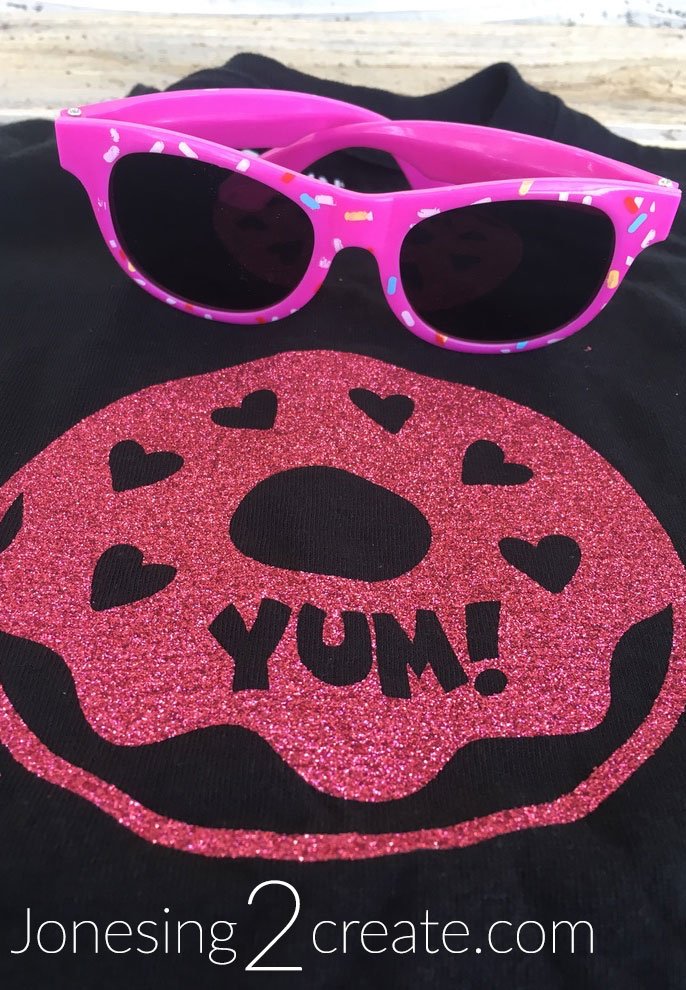 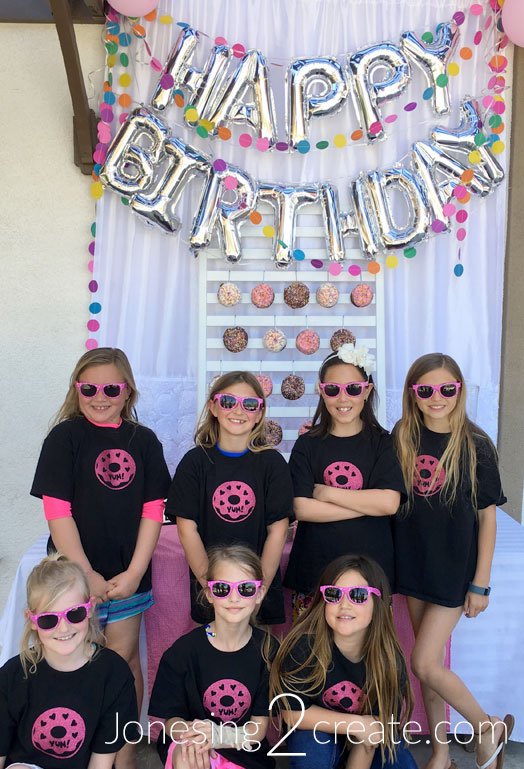 There is way too much to post about the food table here, so I decided to make it a separate post. But the donuts were a huge hit and I loved not having to sweat over a cake.
See the full Donut Food Table with Pink, Silver and Sprinkles Tutorial
See the full Repurposed Crib Donut Wall Tutorial

I always like to have a little busy activity for the kids while the guests slowly trickle in. So I set up a table where the girls could decorate their own party favor bags. We had all kinds of pencils, markets, and donut stickers. I like to use larger bags because it helps the girls keep track of all their party favors and piñata candy. And the girls love decorating them and it saves me a ton of time doing it myself! 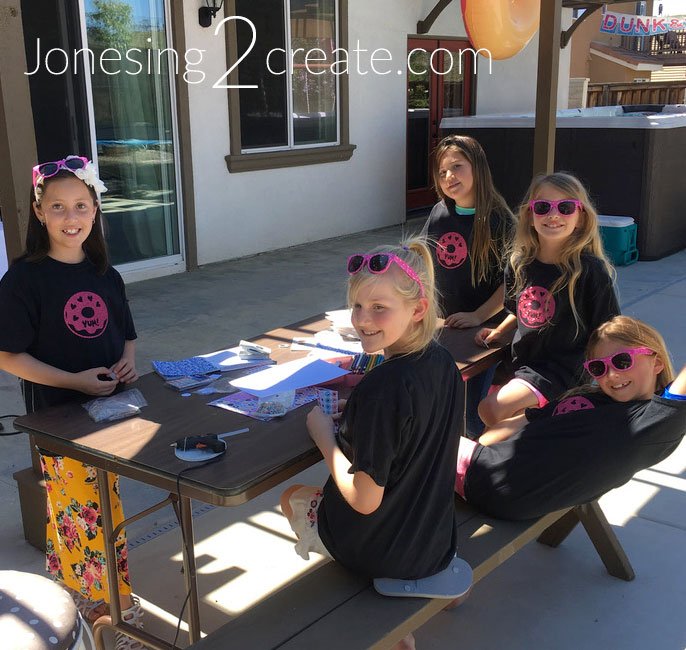 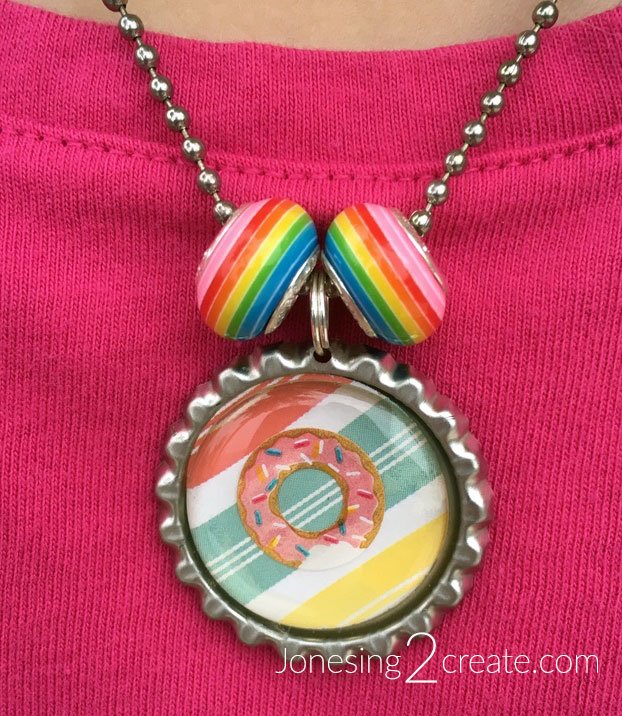 I also had them working on donut bottle cap necklaces. These were really easy and inexpensive to make. The girls could choose to color their own donut or use some of the donut stickers and scrap paper I had out. You can buy bottle cap necklace kits that come with everything you need. I then hot glued the paper circle to the bottle cap and then placed the epoxy sticker over that. I also had some fun beads on hand for the girls to embellish their necklaces a little more.


The girls loved how cool their creations looked after putting the epoxy sticker over it. Since these necklaces aren’t very waterproof, make sure they don’t take their necklaces in the pool!

We were really worried that a 8×16-foot swim spa would not keep seven girls entertained for very long. So I planned a bunch of extra activities besides the crafts. Turns out that I really didn’t need to. The girls were having so much fun in the pool that I couldn’t get them to do anything else. I even bought some extra donuts to play donut on a string, but nobody was interested. It was all about the swim spa!

I had to tell them that there were slow-rise squishes in the piñata to even get them out of the water to do the piñata.

I think it helped that this was the first time they had gone swimming since summer and the water was nice and warm. Plus the current and jets are pretty cool. And they had a blast with all the donut floaties!

But I did get them to play two games: 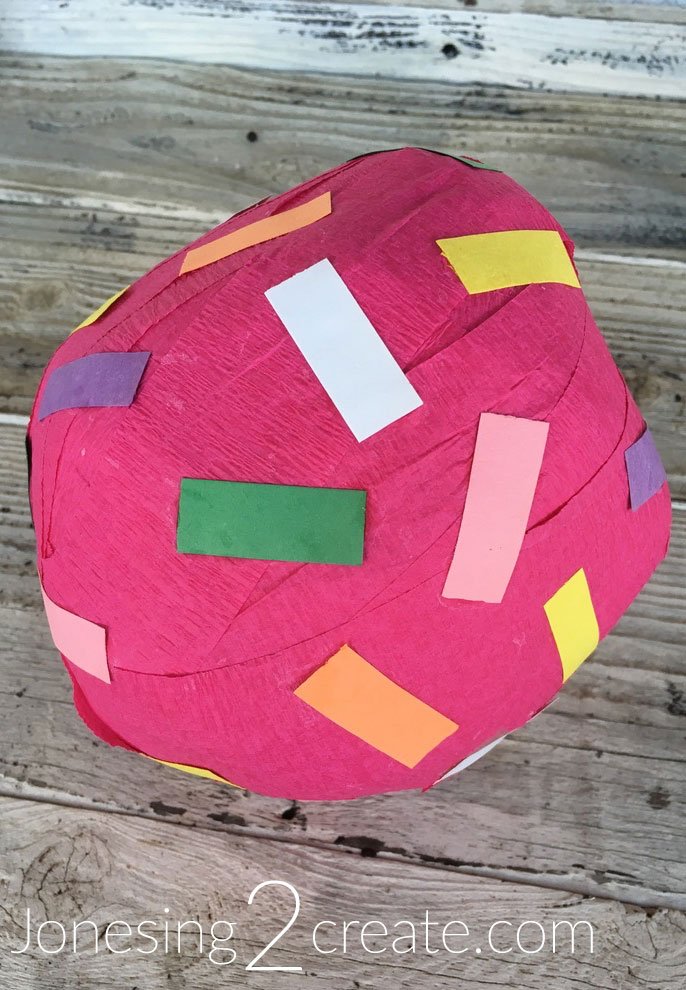 Donut Piñata – The donut piñata doubled as a really cute decoration until we were ready to break it open. Ladybug and her friends are crazy about slow-rise squishes, so I decided to fill the piñata with them. It was a HUGE hit! And you can get small ones on Amazon for pretty cheap. 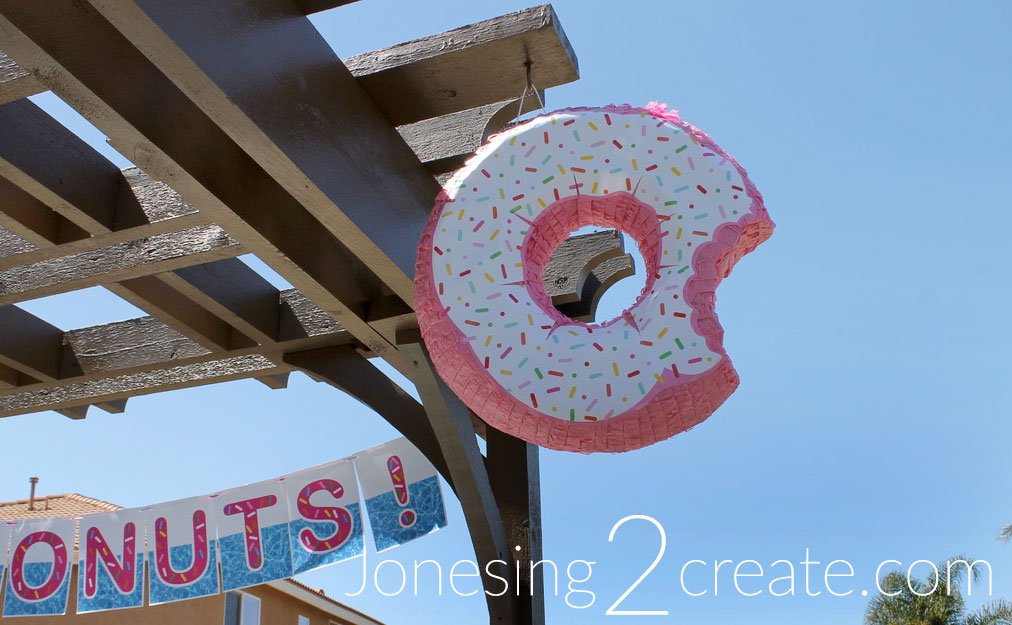 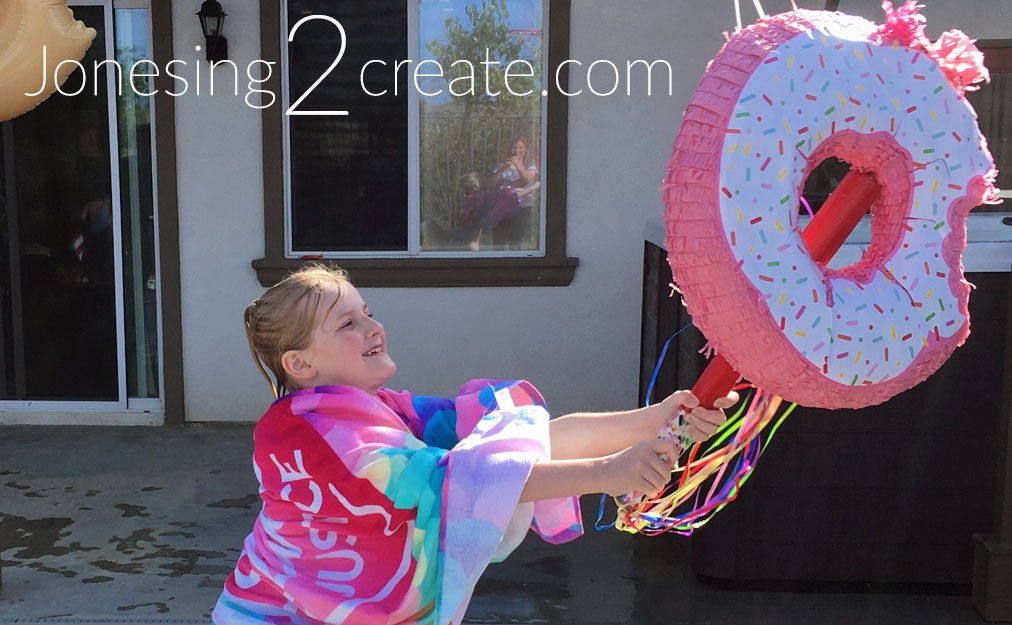 The Dunk and Donuts theme was so much fun to work with! And I loved that it was such a perfect fit for my water-loving, donut-eating Ladybug!