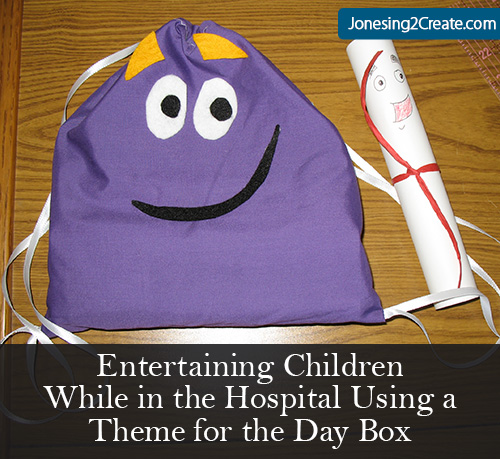 When my niece was about four she had to stay in the hospital for several days for testing. Because of the nature of the testing she would have to spend most of the time in her room. They wouldn’t be able to use a lot of the children’s play areas in the hospital.

We knew that it would be a tough week and wanted to make it as easy as possible. I can’t even imagine. Entertaining children while in the hospital is hard enough; imagine doing it for that long or while being stuck in one room!

So we decided to do a theme for each day and place everything that was needed for that day’s adventure in a box. To make it easier, we assigned each day to different family and friends. The boxes not only had activities but dress up stuff that allowed her to pretend she was somebody else for the day. They all came up with different themes based on some of my niece’s favorite things. For example, one of the other days was a mermaid theme with a mermaid tail!

Since my niece loved Dora we decided to do a Dora the Explorer box. This activity would also be fun for a birthday party or a service project. You could find out from your local hospital if they would be interested in some boxes like this.

Inside the box we placed the following instructions:

Step 1: Color and cut out masks and picture. Tape onto sticks.
NOTES: Print these out to put in the box and include some tongue depressors or Popsicle sticks. Boot’s Mask (PDF) / Dora’s Mask (PDF) / Picture of Swiper

Step 2: Pull out the beads and ribbon and help your child make a “magic” necklace.
NOTES: Include a baggie in the box with easy to thread beads and some thin ribbon.

Step 3: Follow the script below:
Adult: Holding Swiper’s picture over your face, “steal” the magic necklace and place it in the magic lock box.
Child: Yell, “Swiper, no swiping!”
Adult: Tell the child that Swiper has taken the necklace and put it into a magic lock box. Unfortunately he has put a magic spell on it so that she can’t open it. To get the necklace back she will have to pretend to be Dora and consult Map about what she can do to open the box.
NOTES: Include a little box that can be used as the magic lock box

Step 4: Pull out Backpack and Map
NOTES: I made the backpack using an easy drawstring backpack pattern. Map was made with a rolled up piece of paper with the tasks printed on the inside.

Step 5: Open Map up and have the child do each task. At the end of each task, she can place a sticker on the magic lock box. Once she has all the stickers down, the box will open and she can get her necklace back. She will find the items she needs to do the tasks in Backpack.
NOTE: In the backpack I included some of the activity sheets that were needed to complete the task. These were some of the ones I used, but you can find lots more. Most of them I used were from the maze activity pack.

Step 6: Once the box is covered in stickers, open it up and give the child the necklace back. Have Swiper say he is sorry.

. It didn’t fill the entire day of course, but it gave her something to look forward to. And my sister and her were able to spend the rest of the day pretending to be Dora and Boots. Sometimes it is easier to be poked and prodded if you get to pretend to be somebody else while they are doing it. The hospital staff loved the idea so much that they wanted to make some boxes to keep there for entertaining children while in the hospital.