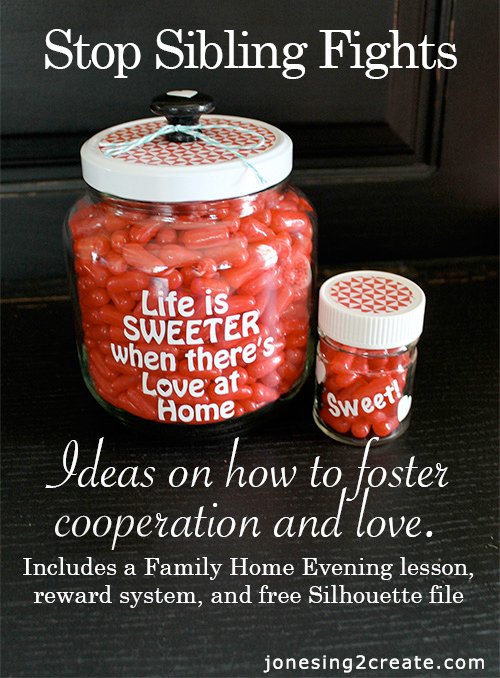 Fighting isn’t always a problem at our house, but sometimes my kids go through phases where it seems like they are at each other’s throats all the time.

When we hit a fighting rut, I have found that the “sweet” jar helps a lot. The worst part about fighting is figuring out who started it. The kids end up getting into a fight about the fight. By the end, everybody is mad at everybody else and I am still not sure who was the culprit. So the “sweet” jar was created to try to get the kids to work together.

If you want to make your own “sweet” jar, you can download the Silhouette file here for the vinyl. I just used an old cherry jar, added a handle, and Mod Podged some cute paper over the lid.
Download Free Silhouette File for Sweet Jar

We started things off with a Family Home Evening lesson on fighting and about “Love at Home.” We talked about how much “sweeter” life is when we all get along.

The lesson pulled from some of the ideas from “Lesson Seventeen: Love at Home” from the Family Home Evening Resource Book. I LOVED the idea of leaving notes for family members where they could find them the day of the lesson.

Then for treats, I made ice cream sundaes. But instead of just offering the normal toppings, I also included toppings like salt, pepper, ketchup, and mustard. When my kids didn’t use the toppings, I asked them why. I pointed out that just like there are some toppings that have no place on an ice cream sundae, there are some thoughts, feelings, and actions that have no place in our home. Just like even a little bit of salt can change the taste of a sundae, treating somebody unkindly can change the “taste” of our home and make it less sweet. But when we add nice toppings, our ice cream becomes that much yummier! While adding yummy toppings, we talked about good things we could add to our family.

Setting a Goal: The Sweet Jar

For our goal for the week, I pulled out a “sweet” jar. I explained that every day this week they would get ten pieces of candy to place in the jar. I explained to them that those pieces of candy were theirs, but that if they fought I would take away a piece of candy. They have done studies that show that people will work harder to keep what is theirs than they will to earn something new. So I thought giving them something that they could lose would be more effective.

Also, by taking away a piece of candy for fighting regardless of who was at fault, it cut back on the finger pointing and I found that both kids were more willing to try to resolve things peacefully before coming to me. Instead of earning pieces of candy separately, they were working together.

But depending on your kids’ personalities, you may have to make some adjustments. For example, Turbo will often bring everything crashing down, even if it hurts him too, just to get even. So when that happened, I told him that Lady Bug would just get to eat that day’s candy all by herself. Or I could see some kids acting up, knowing that the other kid would let it slide so that they wouldn’t lose candy.

At the end of the day, I would put whatever candies they had left in the jar. I never took candies away once they were in the jar because I have noticed that my kids will often stop trying if they think they will lose it all at the end. But I liked having them save the candy up because getting a few candies a day doesn’t feel like a big deal, but eating a bunch at once does.

Then at the end of the week, the kids got to open up the jar, divide up the candy (if there was an uneven number, I would give them a bonus candy), and then they got to enjoy their candy together while watching a movie. My kids don’t get much candy, so having more than a few pieces felt like a major indulgence, and the movie made it feel even more special. During the week, it was fun for them to see how many pieces they had in there, and they had a lot of fun counting them at the end of the week. That was probably the cutest part, watching them with their heads together counting the pieces all out. While counting out the candy, we also talked about some of the “sweet” things they did for each other during the week and how it changed the way our home felt.

Overall the jar worked so well that we ended up using it for several weeks. You can also adjust how many candies you place in a day depending on how big the pieces are and how many kids you have. Or you could use pom poms that they can use to purchase a special outing or treat.