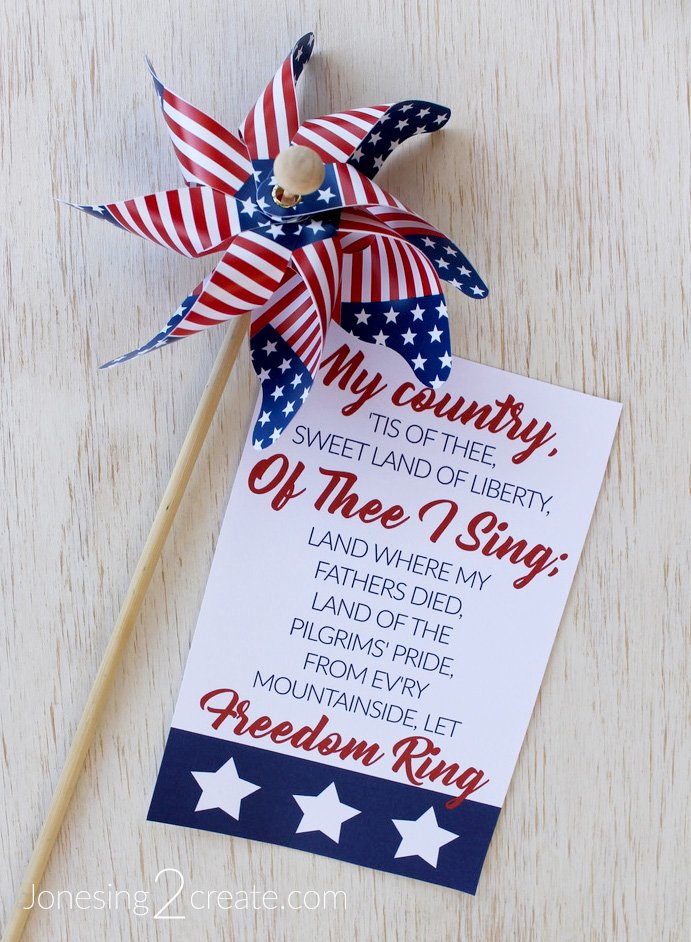 I picked the lyrics to the song “My Country, ‘Tis of Thee” for my Fourth of July LDS Ministering Printable because it made me think of the sacrifices of those who came before us and my own responsibility to “let freedom ring.” 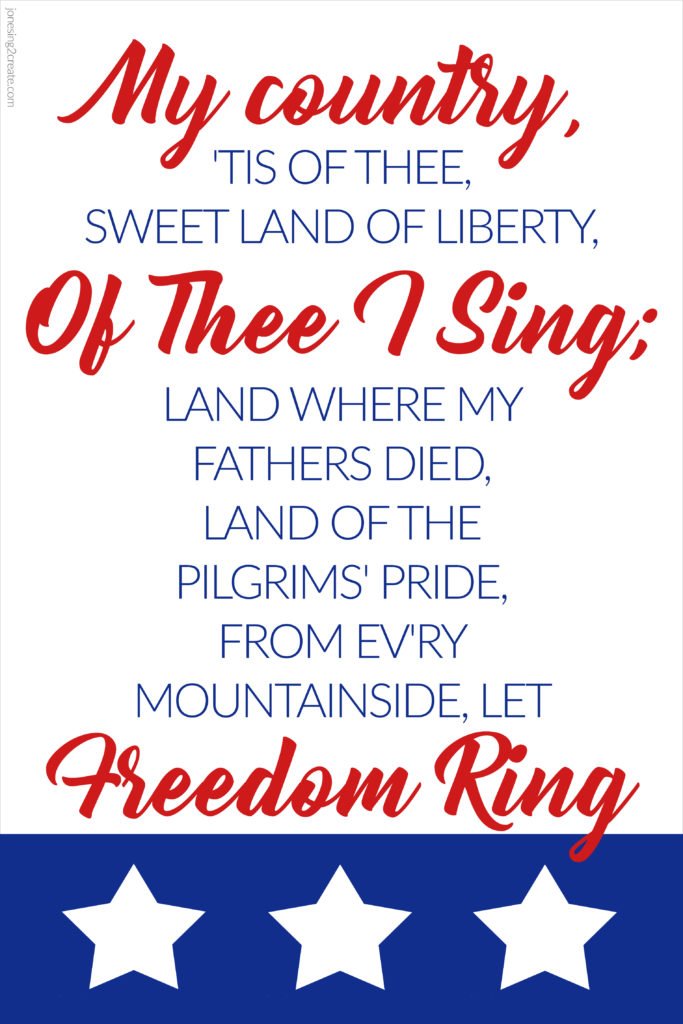 What does it mean to me to “let freedom ring?”

I believe it sometimes means making great sacrifices when it is called upon. One of my favorite love stories is the one between John and Abigail Adams. They both believed passionately in their country and gave more than I can imagine to create this nation. They sacrificed time together and time with their families. They sacrificed their own financial security and put their lives at risk. The love letters they sent across the great Atlantic are touching.

John Adams once wrote Abigail, “Is there no way for two friendly souls to converse together, although the bodies are 400 miles off? Yes, by letter. But I want a better communication. I want to hear you think, or to see your thoughts. The conclusion of your letter makes my heart throb more than a cannonade would. You bid me burn your letters. But I must forget you first.”

But sometimes letting freedom ring doesn’t require a grand, heroic sacrifice. Sometimes it is in the small, little ways that we live our lives righteously.

President Gordon B. Hinckley reminded us, “Great are the promises concerning this land of America. We are told unequivocally that it ‘is a choice land, and whatsoever nation shall possess it shall be free from bondage, and from captivity, and from all other nations under heaven, if they will but serve the God of the land, who is Jesus Christ’ (Ether 2:12). This is the crux of the entire matter—obedience to the commandments of God.”

In this talk, “The Times in Which We Live,” President Hinckley goes on to say:

“Let us be prayerful. Let us pray for righteousness. Let us pray for the forces of good. Let us reach out to help men and women of goodwill, whatever their religious persuasion and wherever they live. Let us stand firm against evil, both at home and abroad. Let us live worthy of the blessings of heaven, reforming our lives where necessary and looking to Him, the Father of us all. He has said, “Be still, and know that I am God” (Ps. 46:10).

Are these perilous times? They are. But there is no need to fear. We can have peace in our hearts and peace in our homes. We can be an influence for good in this world, every one of us.”

We often forget the impact living righteously can have on our lives and the lives of others. Why is it so powerful? Because when we tie ourselves to Christ by righteously keeping sacred covenants, we become His agents. My reach and abilities are finite, but His are infinite. He not only gives me abilities beyond my own, but He helps me direct those abilities to the places they are most needed. We see this in the lives of prophets like Nephi and Mormon, but we also see it in the lives of individuals who shine a light on everything and everyone in their sphere.

President Hinckley reminds us, “The Constitution under which we live, and which has not only blessed us but has become a model for other constitutions, is our God-inspired national safeguard ensuring freedom and liberty, justice and equality before the law.”

But the security of that constitution lies in the people who it governs. John Adams warned us, “Because we have no government, armed with power, capable of contending with human passions, unbridled by morality and religion. Avarice, ambition, revenge and licentiousness would break the strongest cords of our Constitution, as a whale goes through a net. Our Constitution was made only for a moral and religious people. It is wholly inadequate to the government of any other.”

Our freedom comes with the responsibility to live righteously and morally.

In Mormon 2:26, at the very end of the Nephite civilization, Mormon said, “And it came to pass that when they had fled we did pursue them with our armies, and did meet them again, and did beat them; nevertheless the strength of the Lord was not with us; yea, we were left to ourselves, that the Spirit of the Lord did not abide in us; therefore we had become weak like unto our brethren.”

When we forget God, we leave behind that strength. It is the strength that people like the Adams needed when founding this nation and the strength that we need as we keep our families and our nation on track. Whether in the big or small moments, who we are and what we can do is defined by our relationship to God.

In the “land where my fathers died,” I owe diligence to that freedom. John Adams urged us, “Posterity! you will never know how much it cost the present generation to preserve your freedom! I hope you will make a good use of it. If you do not, I shall repent in Heaven that I ever took half the pains to preserve it.”

I did a few variations on the Fourth of July LDS Ministering Printable. This one has those little confetti poppers that their kids can use on July 4th. You pull the string, and it pops while releasing confetti. 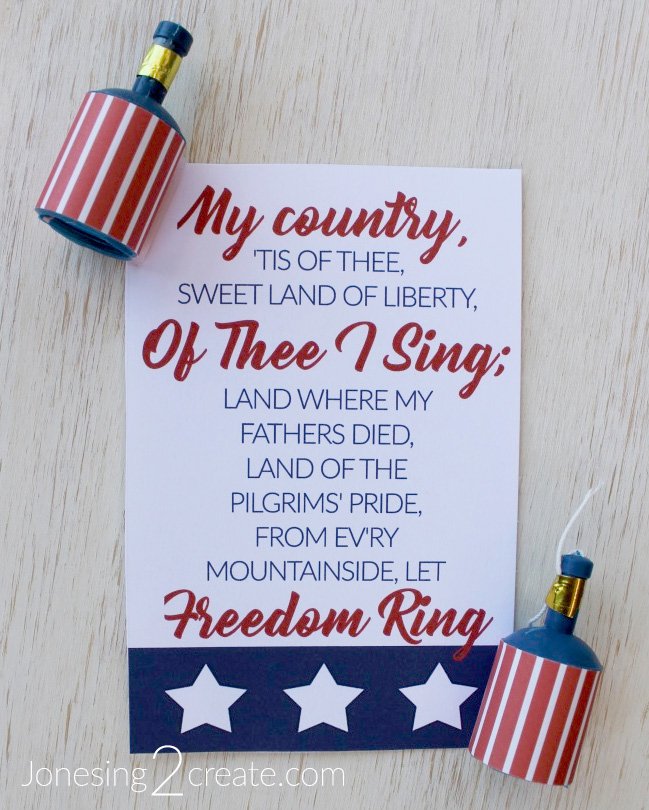 For this Fourth of July LDS Ministering Printable, I used a hole punch and threaded the stick through the paper. I bought the cute, little pinwheels at my local 99 Cent Store. This way would be cute for sticking in a flower pot. 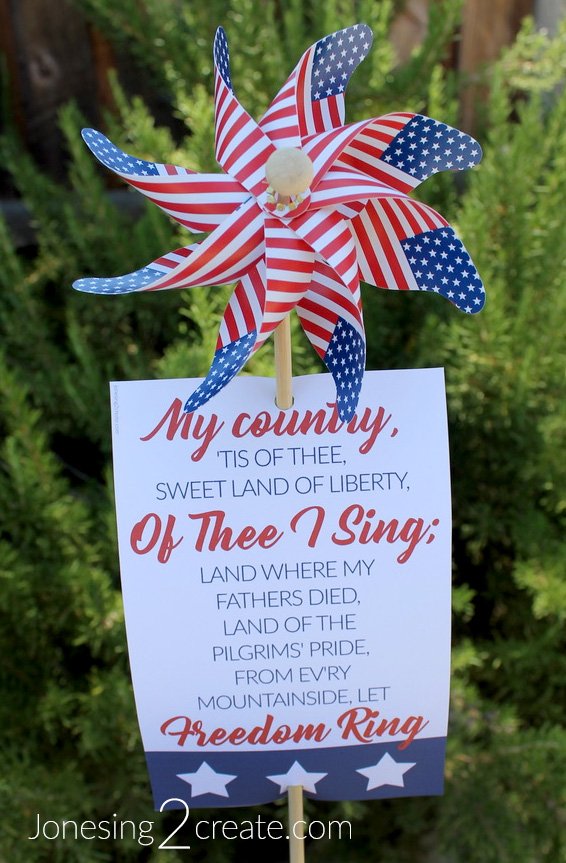 Did you like this Fourth of July LDS Ministering Printable? Find more LDS ministering printables here.