Every party starts with an invite, so I figured I would start there. Plus my kids absolutely loved the way we delivered the invites!

The first thing I tackled was the invite and it was an easy one. Every kid who loves Harry Potter dreams of getting an acceptance letter to Hogwarts!

There were some amazing ones online, but I knew I could keep it simple and that the kids would be just as impressed. Luckily Sean at seanlockephotography.com had already created a really good Word template of Harry Potter’s acceptance letter, so I was able to just tweak it a bit. I also printed out a train ticket for the Hogwart’s Express. They were both easy to print from my office printer. I used a nicer beige paper to make them look more like parchment.

I really wanted to use a wax seal, but didn’t want to invest in buying a seal and the wax. So I found a picture of the Hogwarts’ seal online, printed it out, and pasted it on the envelope! At this age, the kids didn’t care and it was so much easier! 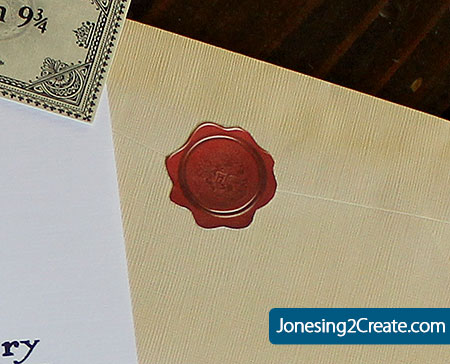 I then addressed the envelopes according to where the kids’ bedrooms were, for example “Bedroom at the end of the hall.” The one thing I totally forgot to do before I printed them was to use green ink! Oh well…

I knew my son would want one too, so I made an extra for him with his name on it and the next morning I stuck it on the front door mat. I then told the kids that I heard a “hoo’ing” noise coming from the front of the house. They immediately ran to the front window and started guessing about what it might be. They quickly decided that it must be an owl. I then had B– open the door and he discovered the letter. He was thrilled! It was so cute!

It was so much fun that I thought we should do something similar for the kids we were inviting. G– LOVES Halloween because every year we go “Boo’ing” and drop treats off at friends’ doorsteps after ringing the bell and running away. She loves it so much that she usually ends up talking us into doing several houses.

So we decided to go “Hoo’ing.” The kids ran the invite to the door while I waited at the curb. They dropped the envelope on the doorstep, said “hoo, hoo” really loud, knocked on the door, and then ran away as fast as their legs could carry them. It was hoot (pun intended)! I was dying. Listening to them hoot was really the best part. I wonder if anybody actually even heard it in the house. Dropping off the invites was so crazy easy to do and it was seriously one of my kids’ favorite parts. Their little hearts were pounding so hard from the running and excitement!

And I loved that it got them involved with the party planning and making it fun for others. When I throw parties I make sure that my kids know that the party is to help their friends celebrate and have fun—it is not about them. We talk a lot about what it means to be a good host and they never get the first piece of cake. I find that they have a lot more fun at the party if they aren’t so worried about what they are and are not getting.

Keep your eyes out for my next post on how to recreate Honeydukes with pickle jars!