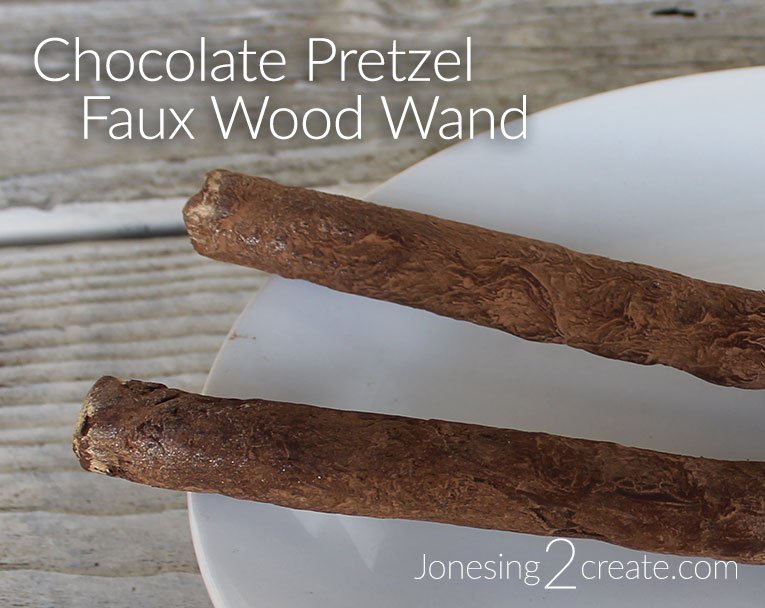 A few years ago, for my boy’s Harry Potter birthday party, I made some chocolate pretzel wands for our Honeydukes candy table. 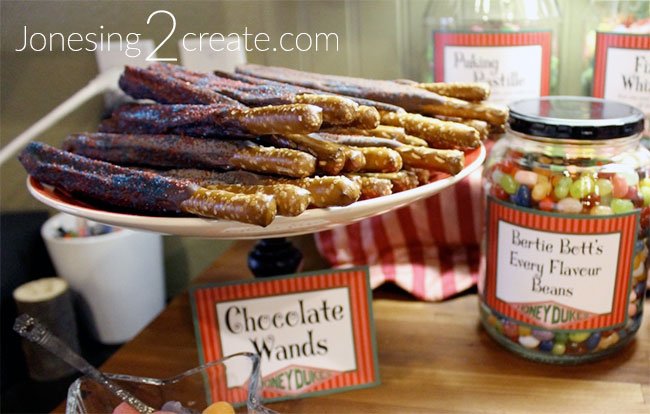 But this summer we visited Honeydukes at Universal Studios and noticed their chocolate pretzel wands were a bit fancier. They were entirely covered in chocolate, smooth, and had a gold tip. 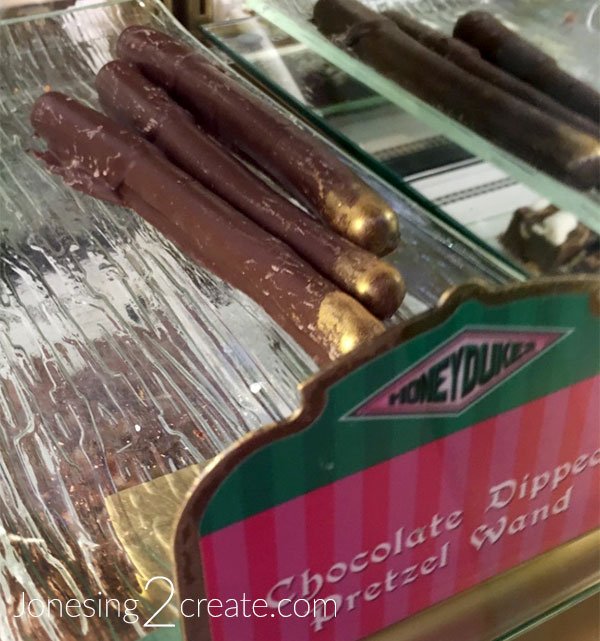 So when we decided to make some of our own homemade Harry Potter souvenirs, we decided to give this fancier version of the chocolate pretzel wands a shot. But the best part is we actually came up with a better technique that made the wands look like real wood! 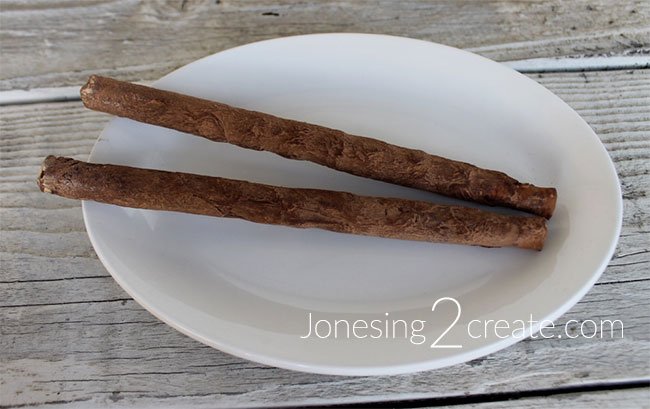 I wanted this to be a hands-on, learning project for my kids, so I did a simple kid-version with them first. I showed them how to dip the pretzels and then cover the tips with gold sprinkles.

My favorite chocolate to use is Ghirardelli. The semi-sweet chocolate chips work great for this, but they do have some wax in them. The wax can create a white film over the chocolate as it hardens. I find that letting it harden in the fridge helps, but if you want to avoid the problem entirely you can use the Ghirardelli Chocolate Melting Wafers.

I simply poured the chocolate chips in a big Pyrex glass measuring cup and microwaved it for 30 seconds at a time, stirring the chocolate well between each 30-second interval. Stop once your chips are almost entirely melted. If you stir it a bit more, the remaining heat in the chocolate should melt them the rest of the way. You want to be careful not to microwave it too much and to stir it well or you could burn your chocolate. Yuck!

For the pretzels, I used Snyder’s of Hanover Pretzel Rods. I let the kids dip in the pretzels and taught them how to smooth the chocolate all the way up to the top with their spoon. 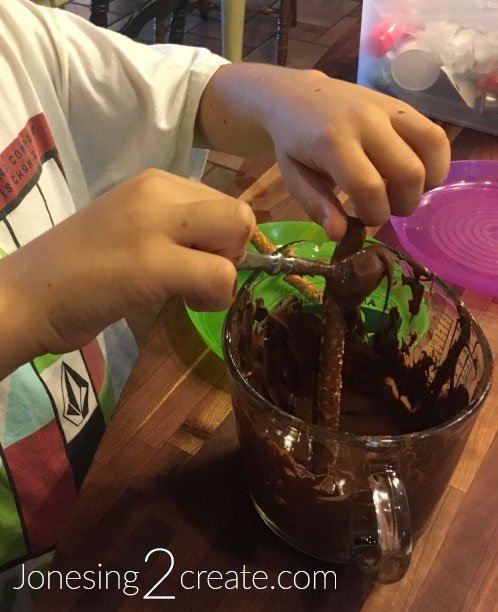 Once the pretzel was covered and the chocolate spread around, they put it on wax paper and sprinkled some gold sprinkles on the tips. 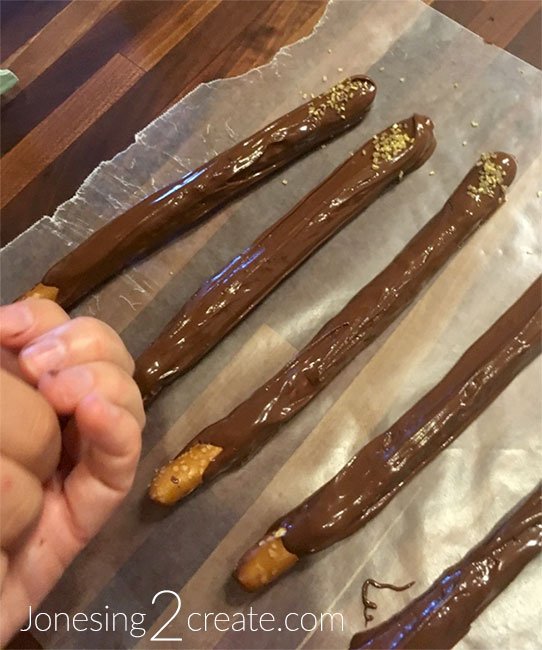 They had so much fun and were thrilled that they were able to make several wands for what one wand would have cost at Universal Studios.

How to Make Wands That Look Like Real Wood

While the kids were waiting for their wands to cool, I made some of the fancier ones. To get the real wood effect, I started out just like the kids by simply dipping my pretzel in the chocolate. You will want to be sure to get the chocolate almost all the way up to the top, only leaving enough of the top to hold on to. I have also found that with this method you can just use the cheaper chocolate chips instead of the melting wafers.

Now instead of putting the dipped pretzel on wax paper and letting it harden completely in the fridge, I left it on there for only about 10 minutes out on the counter. The trick is to leave it long enough to let the chocolate cool and harden slightly, but only to the point that it is a little more malleable and not as drippy.

I then picked up the pretzel and set it on a sheet of wax paper that I had covered in cocoa powder. You want enough cocoa powder so that the chocolate doesn’t touch the wax paper. 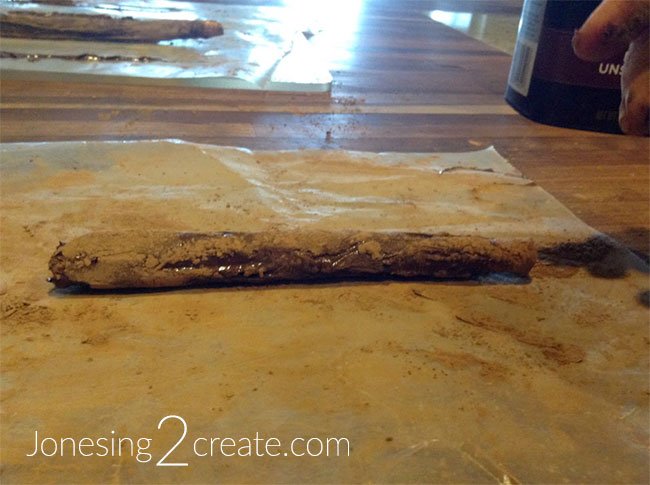 I then gently rolled the pretzel in the cocoa powered, covering all the chocolate in cocoa powder. 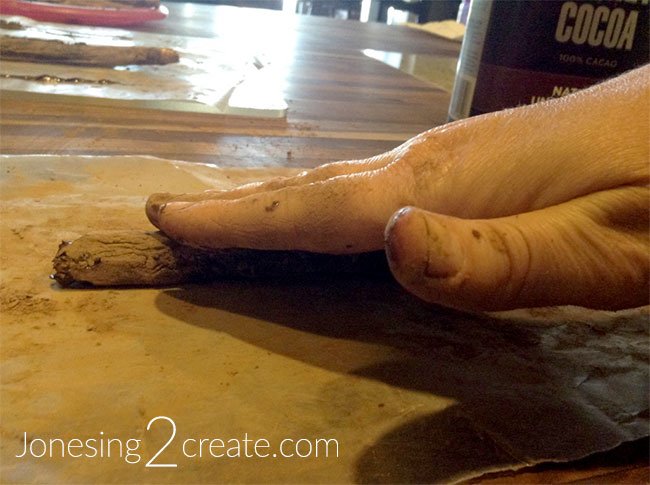 You want to be careful with this part because the pretzels aren’t perfectly straight and the pressure from the rolling can snap them against the hard counter. I find it helps if I pick it up in my hands and finish the rolling once the pretzel and my hands are well covered in the cocoa powder.

In my hands, I gently worked down the chocolate to cover the little tip that wasn’t totally covered in chocolate. I also worked to get the chocolate spread on evenly and smoothly. The goal is to have it be a nice, even cylinder shape all the way up and down. If you need to, add more cocoa powder to your hands to keep things from getting sticky. If you accidentally snap a wand, don’t worry, we had fun eating the goof ups later!

Once the wand was evenly covered with chocolate and cocoa powder, I set it on the wax paper and let it harden in the fridge. Wait about an hour or two, and then comes the really cool part. Take a slightly damp paper towel (it should be damp, but not wet enough to be dripping). You are now going to gently rub off some of the cocoa powder. Don’t rub it all off, just enough to allow the faux grain come through. When you rolled the slightly cooled chocolate in your hands, you will notice that it wrinkled a bit, creating a kind of wood grain. 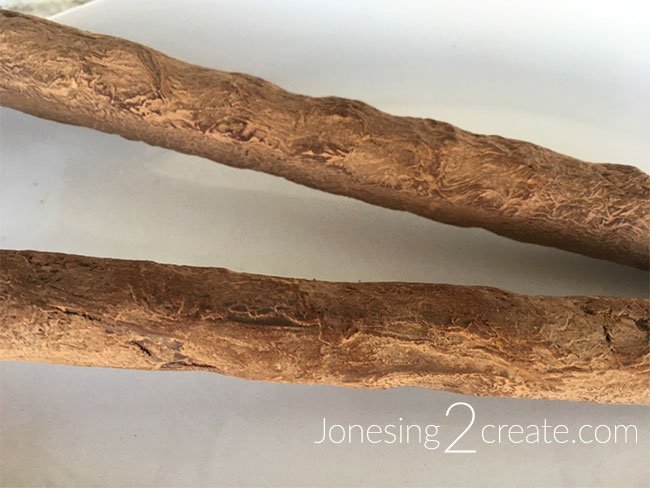 We decided to go the extra mile and add the gold tip. So we used gold pearl dust mixed with a tiny bit of water. I then painted it on the tip using a clean brush. It wasn’t a lot, just enough to add a faint glow.

I couldn’t believe how cool they turned out! The kids thought they were so much better than the ones they sell at Honeydukes in Universal Studios. Ladybug even tried to steal my wand by shouting “Expelliarmus!” at me. Luckily, she is a muggle and it didn’t work. 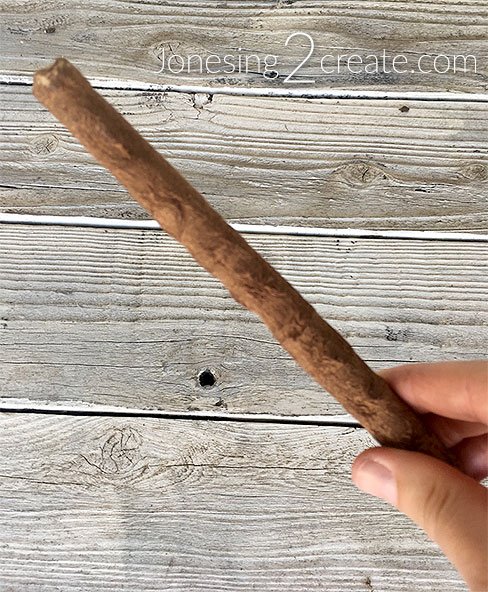