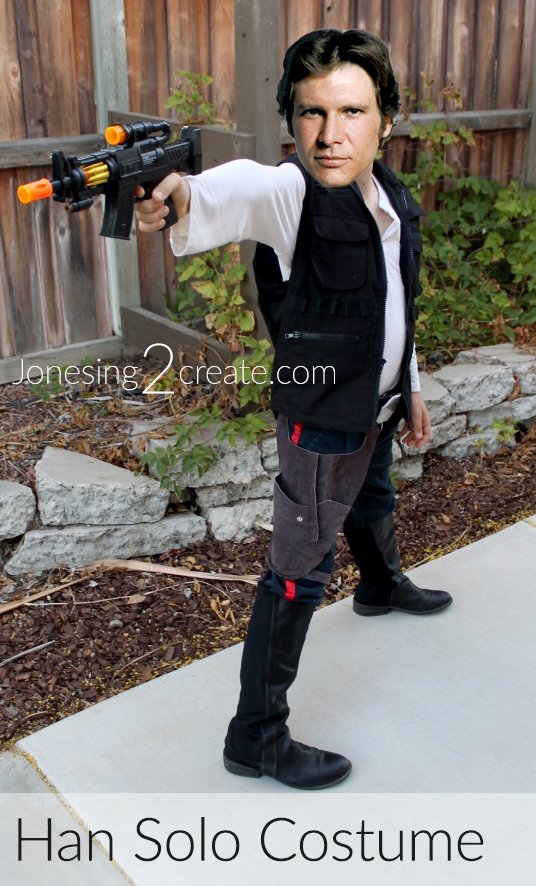 This year my boy decided to grow out his hair, so we thought a Han Solo costume would be perfect for Halloween. See, isn’t he the spitting image of Han Solo? 😉

I have also been short on time this year and the costume looked pretty easy to do, and it was, until I hit the holster. The holster was a pain to figure out. It needed to be cheap, easy, and stand up to an active boy. I thought about just skipping it, but the costume really needed it. I even thought about buying one, but they were all way too expensive.

Luckily, I finally figured out a pretty straight forward and inexpensive way that will save you a lot of time. I will cover it in more detail later in the post.

Keep in mind that this Han Solo costume isn’t intended to be an elaborate and highly accurate cosplay costume. It is intended to be a quick, easy, inexpensive, and comfortable costume for little kids that can hold up to abuse. I will be covering the pieces from the top down.

Fabric is expensive and considering my aversion to sewing sleeves, I knew thrifting was the way to go with the shirt. But after looking at a few thrift stores, I actually ended up finding a shirt at Walmart that had the perfect collar. It was only $5.50, which was about what they were charging at the thrift stores anyway. While it was definitely a women’s shirt, I knew with a few tweaks it would work.

I bought the shirt in a small so that it would fit. I then took off the gold buttons and straps on the sleeves. The shirt was lower in the back than the front, so I trimmed off the bottom too to make it all even. Lastly, I tea stained it using peppermint tea. Tea staining is really easy to do. I just boiled some water in a large pot, stuck in about 10 tea bags, let them seep, removed the bags, got the shirt wet so that it would absorb the stain evenly, and then soaked the shirt in there for several hours. After, I ran the shirt through the wash to get out any excess color. It gave the shirt that perfect, worn, warm color needed for the Han Solo costume. 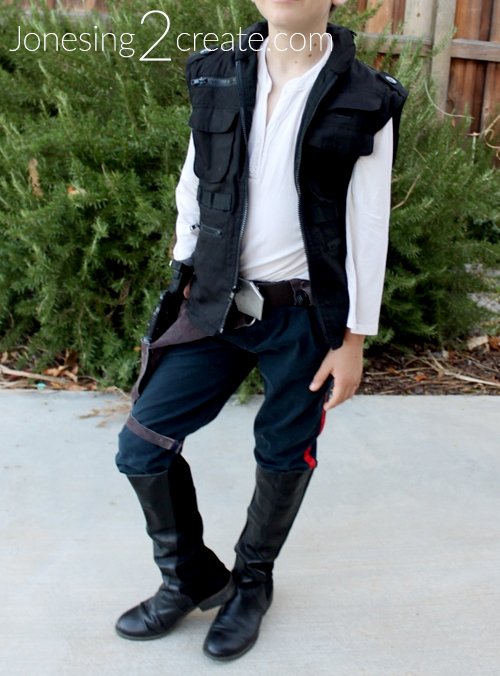 I bought the vest on Amazon. Originally, I bought it to use as a weighted vest to help my son focus during homework. I added the weight by making little bean bags to put in the pockets. Weighted vests cost a lot of money, so this one was a steal and I figured it could also double as his Han Solo costume. The vest is actually pretty cool and will be fun to take hiking and camping too. 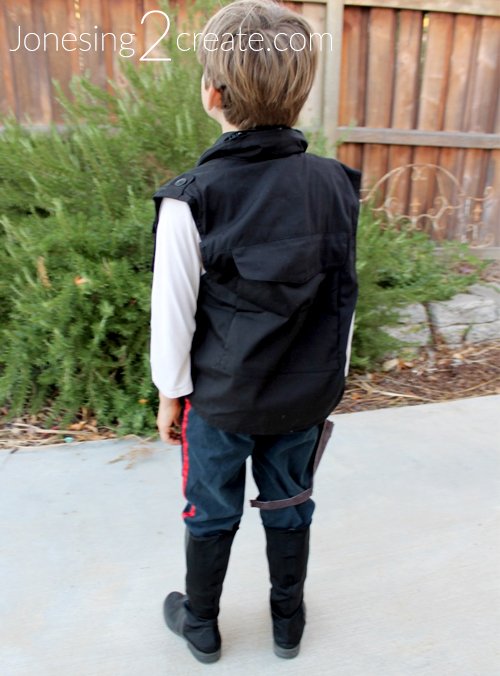 You can buy these online, but they are pricey and I knew it wasn’t going to get much use later. Plus I didn’t know if it would fit our gun or be too big for my boy since the holster is for adults.


The hard part about making it was figuring out how I wanted to do it. I had seen others use pleather or foam, but my boy is ACTIVE and I didn’t think it would last more than 30 seconds. So instead, I rigged up a holster that could be slid onto a normal belt. That way you can reuse the belt later, but you have a strong belt to hold everything together. I also bought a suede skirt at Goodwill for $3 to use for the leather to make the holster with.

First, I grabbed the gun we were going to use so that I could figure out how big and what shape to make the holster. I just traced around the gun and added two tabs to the top in the shape of a Y. 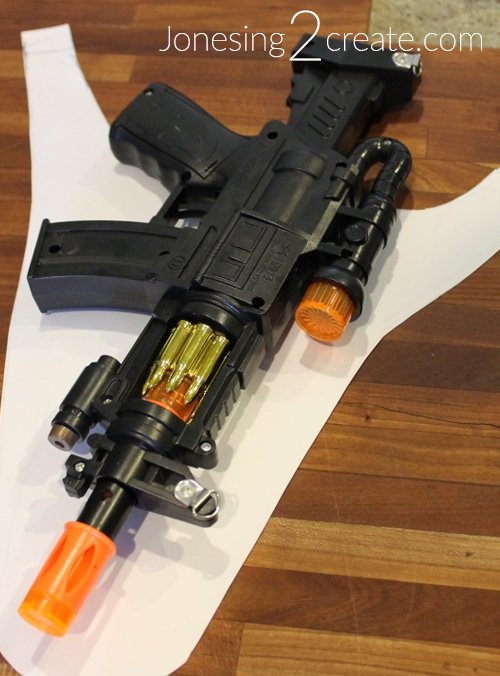 We actually reused the gun from my daughter’s Princess Leia costume, so it is a bit bigger than Han Solo’s is in the movie. But you can buy the Han Solo gun online.


I cut out the pattern, and then used it as a guide to create a slightly larger top piece. That way when I sewed it together it would form a pocket with enough space to house the gun. See my video tutorial for a better idea on how this was done.

Next, I sewed a little strap of the suede with velcro on the base piece for the strap that attaches to the leg. Suede isn’t hard to sew through, so I was able to just use my sewing machine. I then sewed the top piece to the bottom piece. Lastly, I added a strap with a snap to keep the gun in place and sewed a d-ring on either tab.

To attach the holster to the belt, I sewed a loop of suede around each d-ring the same size as the width of the belt so that it would fit snug when placed on the belt. The belt I bought for this has a smaller buckle, but you could use any kind of brown, leather looking belt.

For the buckle, I cut the shape of the buckle out using coroplast or corrugated plastic. I covered the choroplast in duct tape, but it didn’t look very authentic. So I then covered the coroplast with metal from a pie tin (one of the disposable ones you get from the frozen pie shells you buy). 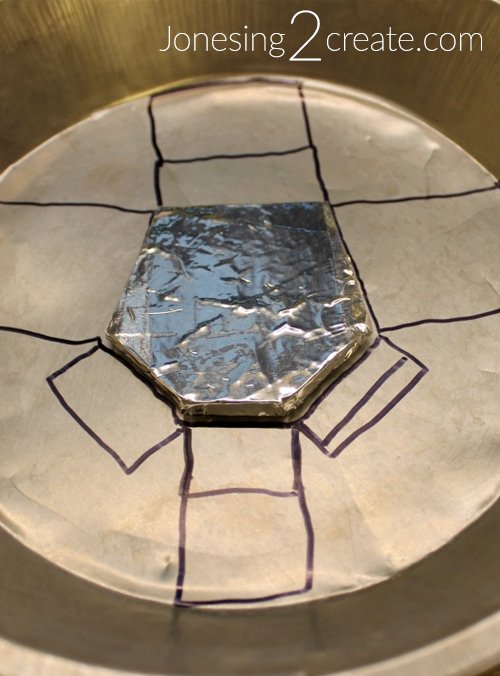 When I cut out the metal, I left tabs that could be wrapped around and secured around the loop of suede so that it would be secure. 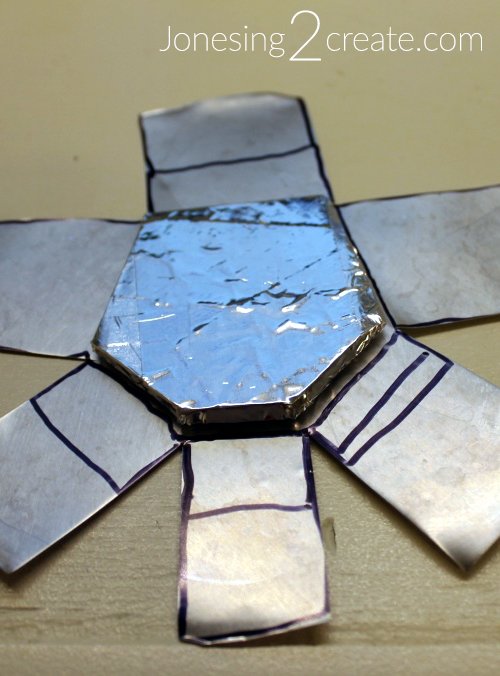 I then taped down the tabs with silver duct tape. I thought about using tin foil, but the pie tin gives it that real metal look and it was easy to cut through. Plus, it is durable. 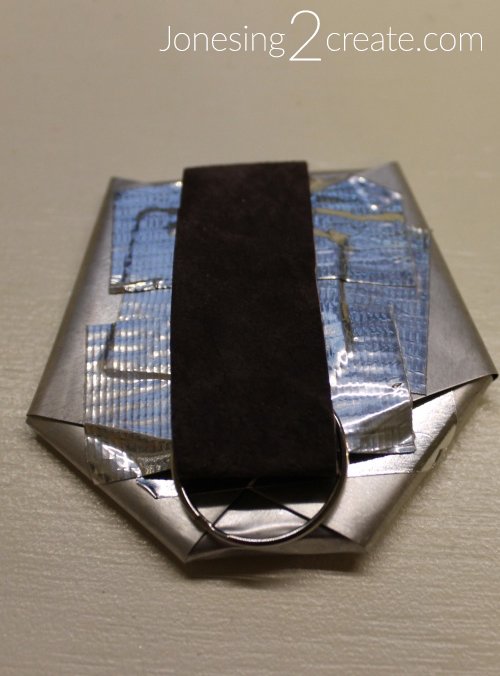 Once you have the buckle taped on the loop, you then have two tabs that can simply be pulled on over the belt. I duct taped the loops on the back of the belt so that they wouldn’t slide around. I also created a loop with a strap to hold a droid caller. I made the droid caller using a LED flashlight I bought at the dollar store that I then wrapped black and silver duct tape around. It looks cool and my boy can also use the flashlight if he needs to. 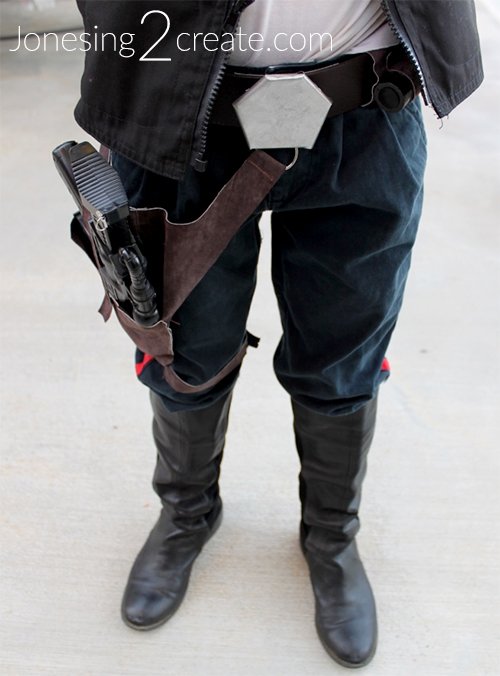 Once I figured it out, the holster took me under an hour to do.

These were pretty easy. I just pulled out a pair of blue church pants that had gotten too short for my boy. I am sure you could pick up something at the thrift store too. The stripe on Han Solo’s costume is more of a dash, but I was looking for fast and easy over authentic, so I just used a solid red ribbon. To sew it on, I unstitched the inseam of the pants so that I could use my sewing machine to sew on the ribbon. Once I was done, I just sewed the inseam back together. It sure beats hand stitching and I didn’t want to glue the ribbon on. I don’t trust glue.

Shoes can make the costume, so wanted to find real shoes for my boy’s Han Solo costume, not just the slip over shoe covers. I was able to pick these boots up at a thrift store for about $4. They are women’s boots, but lets be honest, most super hero/hero types look like they wear women’s shoes anyway. Just find something that doesn’t have a high heel. My boy has huge feet, so buying a small pair of women’s shoes worked great.

My favorite part of designing costumes is watching my kids put it on for the first time. After putting on his Han Solo costume, my boy was leaping around and fighting off bad guys. He was so happy!

I was going to DIY a Chewbacca costume for my man so that my boy would have his sidekick, but then I found these amazing Chewbacca PJs for only $20! Perfect! They are going to be so cute when trick or treating!

In the words of Han Solo, “You know, sometimes I amaze even myself.”