How to Play Quidditch with Water! 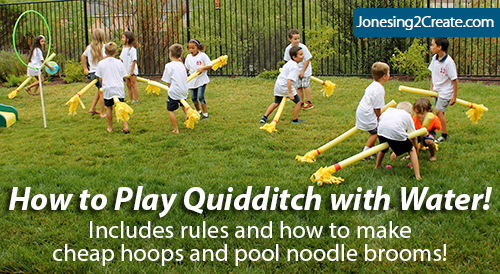 I really didn’t want to do a Harry Potter party without playing Quidditch, but I was really worried about the heat. It can get incredibly hot here during the summer and I didn’t want the kids dropping like flies. So I decided to do a water version! We had so much fun with my son’s Water War party that I knew it would be a hit!

You can’t play Quidditch without broomsticks, but there was no way I was going to give brooms to a bunch of boys.
Boy + Stick = Weapon

So I decided to make the broomsticks out of pool noodles! I figured pool noodles would be pretty safe even if they were turned into weapons on the field.

They were really easy to make. I just cleaned the Dollar Store out of all their yellow pool noodles and bought some plastic, yellow tablecloths. I folded the tablecloth up lengthwise and then cut it into sections that were long enough to be the bottom of the broom. With the sections still folded up, I then then cut the fringe so that I could go through several layers at a time. I then taped one edge of the section to the pool noodle, wrapped the tablecloth around tightly, and then taped it off at the end. I then wrapped some red ribbon around it to give it some contrast. It was so easy!

They cost only a little over a dollar each to make and they were perfect!

I also made “jerseys” for all the kids. You all know how much I love making custom t-shirts as party favors! (read more about how to do custom t-shirts) 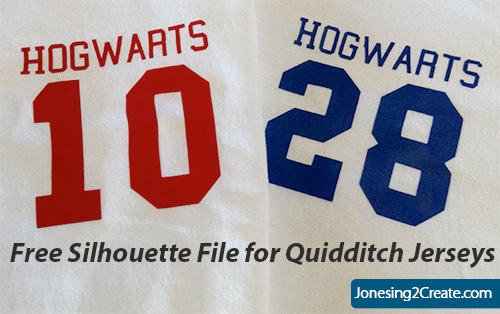 I didn’t do house teams because I didn’t want anybody feeling bad about which house they were in. So I just had them say “Hogwarts” and then a jersey number. The decals were either red or blue for which team they were on.
Download Free Silhouette File for Quidditch Jersey

Instead of doing six hoops, I just did two because our backyard is smaller than a normal playing field. Plus I am lazy and cheap.

I made them using hula-hoops from the Dollar Store, duck tape and some PVC pipe.

To stick them in the ground, I just took the hoop piece off and used my mallet to drive the pipe into the ground. I didn’t mind the hole in the grass because I needed to aerate the lawn anyway! I then just put the hoop piece back on.

They held up really well during the game and I will be able to use them again.

For the Quaffle I used one of those large balls you can find at the grocery stores. Then I used those water bomb splash balls as the Bludgers. I had buckets of water out by the field where the kids could soak their Bludgers before throwing them.


For the snitch I had a yellow t-shirt for one of the kids to wear. I then put a Whiffle ball in a sock and looped it over a belt so that it hung off the back of the kid’s waist. To catch the snitch, you had to grab the ball. Kind of like flag football. 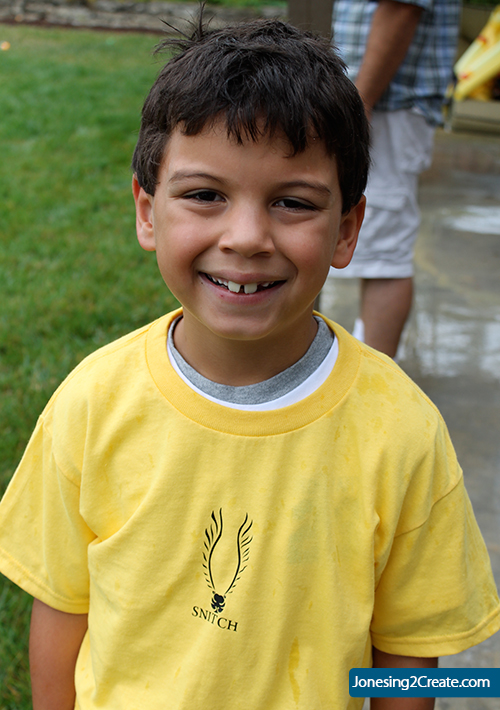 What a cute little snitch!

How to Play Quidditch

There are lots of different adaptations of the rules online, but I wanted to keep it as simple for the kids as I could. The kids were pretty young and some weren’t very familiar with the books. I didn’t want to spend a lot of time trying to teach them how to play, so I didn’t even have them play positions. I just told them that if they got hit with a Bludger, they would have to stop and throw the Quaffle to somebody else on their team. Everybody was allowed to throw Bludgers at the other team. They could only move if they had their broomstick between their legs. And then of course the goal was to get the balls through the opposing team’s hoop.

We started out with a kid playing the snitch, but he got bored and wanted to play like everybody else, so we just got rid of the snitch. But if you do want to play with the snitch the rule was that anybody was allowed to try to catch the snitch (i.e. the ball around his belt) unless he was off the grass. That way the snitch could dart in and then catch a breath if he needed to. 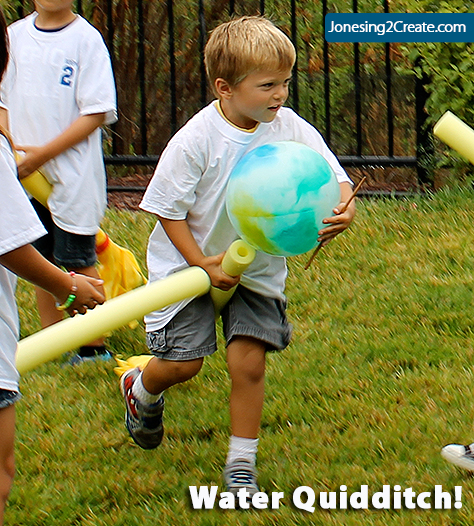 The kids had a BLAST! This was probably one of my favorite parts of the party! They got so into it and I loved watching them.

Ironically on the day of the party it ended up raining a ton. Since we were planning on getting wet anyway and I had told the kids to bring towels, we just rolled with it and used the water from the rain!

Next up I will be sharing some Harry Potter Party game ideas!