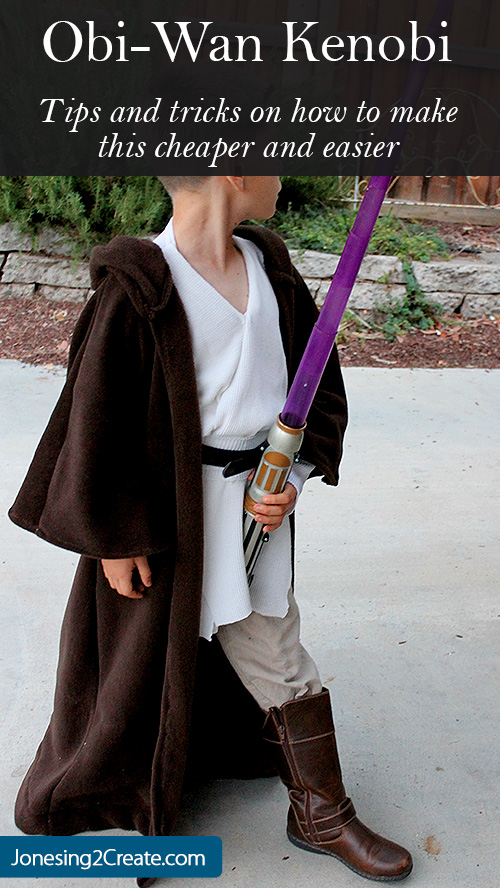 This year B– decided he wanted to be a Jedi for Halloween. He already has Mace Windu’s lightsaber, but the kid is a dead ringer for Obi-Wan Kenobi. So we decided to ignore the fact that his lightsaber was the wrong color and went with the Obi-Wan Kenobi costume.

My husband is always trying to get me to simplify things unless he gets excited about it, and then I am the one who has to put the breaks on. He has been trying to talk me into having B– age during our church’s Halloween party so that we can cover Obi-Wan at all three ages in the movies. So B– would start out with the padawan braid, then get the brown beard, and then the grey one.

I told him that if he wanted to be stuck during the party trying to wash make up off B–‘s face he could go for it, but he was on his own. Last year when we tried to do B–‘s zombie make up it was a train wreck. He is super ticklish and doesn’t like people touching his face. There was no way I was going to relive that not only once, but two times during a Halloween party. But I love how excited he gets. It is so cute watching him be a daddy.


[Side note: Check out how to make a Kylo Ren costume using a scoodie or hooded scarf]

How to Make an Obi-Wan Kenobi Costume

Making the Jedi robe was super easy. I used the tutorial over at www.degraeve.com and used a nice thick fleece fabric. I also made a belt for it so that B– could use it as a bathrobe later. The only change I would make is that their hood isn’t big enough. I used the 16×32 size for B– and it was just right if it was a hoodie, but not quite big enough for a Jedi robe. The hoods on those are supposed to be pretty big. I love that I was able to make the Jedi robe without having to sew sleeves. I hate doing sleeves. 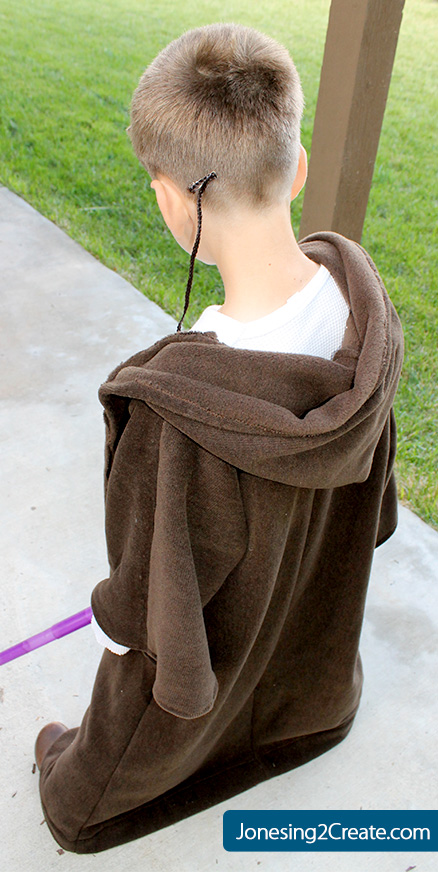 The part that had me the most stumped was the tunic. I really, really, really didn’t want to have to make it from scratch. And I absolutely didn’t feel like doing sleeves! I was tempted to do just do a vest, but decided against it. It is still pretty warm where we live on Halloween. I knew that there was a good chance that B– wouldn’t wear the Jedi robe all night and I wanted his costume to still look authentic.

And then I saw that Kelli over at the-wilson-world.blogspot.com had used thermal tops. Brilliant! I had some old ones in the garage. When I dug them up I saw the matching pair of pants and realized that they would make the perfect v-shaped tunic. Even better! 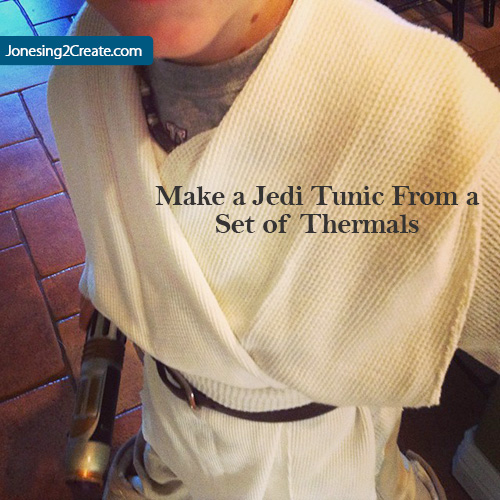 First I cut the legs out of the thermal pants so that I had two pieces. 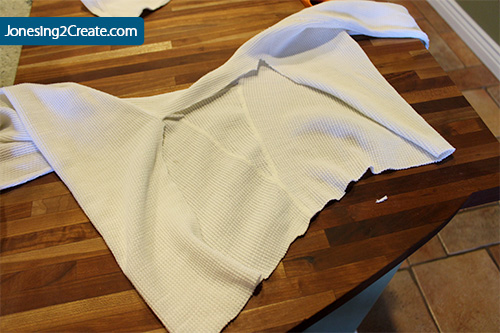 I then cut the cuffs off at the bottom and cut the legs open along the seam. Next you fold in the sides a bit and sew the top to the back part of the thermal. 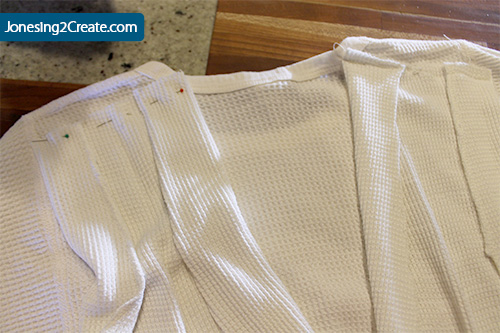 Once it is sewn on, you can flip them over the shoulders and you can’t see the seam. 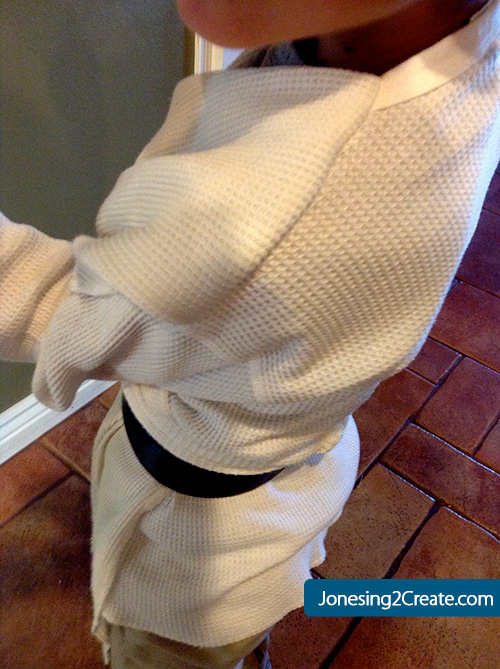 When you put it on, you just cross the two legs over your chest and tie it with a strip of fabric for a belt. I also cut the cuffs off of the shirt. It only took me about 20 minutes to do. Be sure that you get a thermal shirt that is on the big side. You want it to hang loosely like a tunic, not tight. 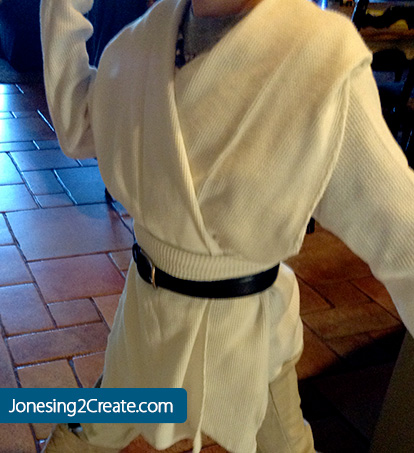 Once the robe and tunic were done, everything else was easy. I just used some khaki pants and tucked them into B–‘s socks and then some boots. I found the perfect boots at Goodwill for $10. I hate spending money on something we will only use a couple of times, but they were super cute boots and I figured his sister could wear them in a couple of years. 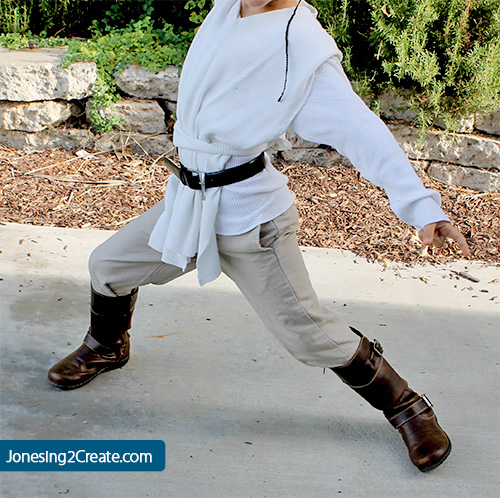 For the belt, I just used a leather belt B– already owned and then a carabiner clip to attach his lightsaber on it. If you don’t already have a lightsaber, I love those ones they make out of pool noodles. So smart! And you can also get some simple ones for pretty cheap on Amazon

I also made him a padawan braid from a hair extension set they had a Goodwill and then glued it to a hair clip. His hair was a little short on the bottom to clip it on, so we had to clip it up a little higher.

G– decided to join her brother and is going to be Princess Leia this year. The kids both love their costumes A LOT. Maybe a little too much. Since finishing the costumes we have had a number of epic Star Wars battles in the house. I have tried reminding the kids that Princess Leia and Obi-wan are on the same side, but no luck. I told my husband that I am kind of wishing I had talked them into being Gandhi. And those pool noodle lightsabers are starting to sound a lot more attractive.

Next week when I get some time and come down from the Halloween sugar buzz, I will post the photos and tutorial for her Princess Leia costume.