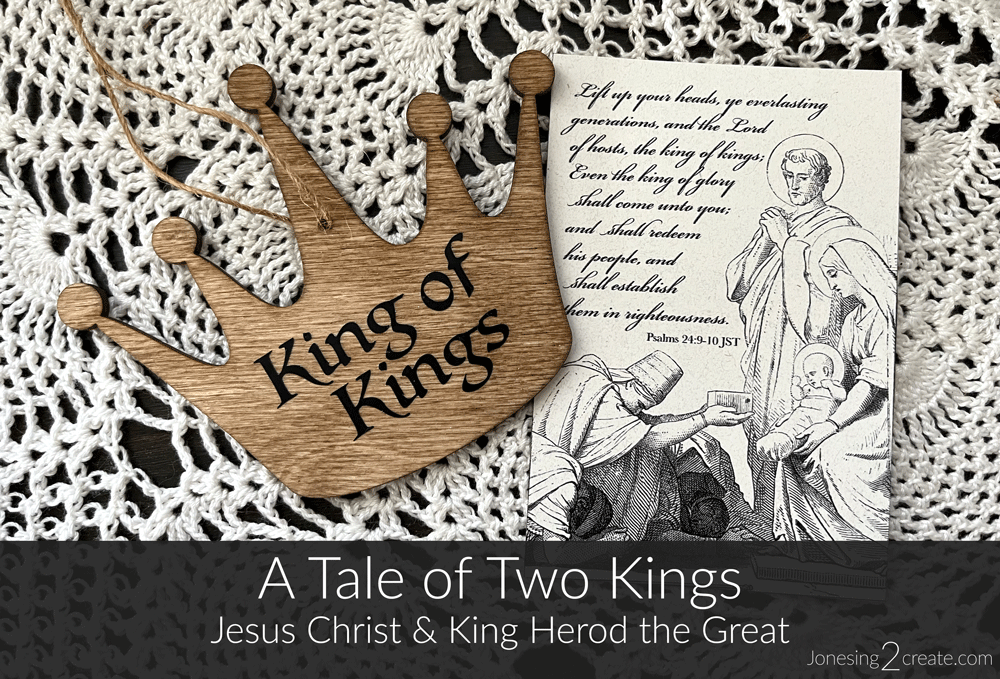 This is my sixth year of my Christmas challenge. Every December, I challenge myself to look at the nativity story in an entirely new way. It takes me out of “Christmas auto-pilot” and helps me really focus on the Savior. This year, when I told my husband that I was going to do a King Herod Christmas ministering message, he thought I was crazy.

But writing something uplifting using King Herod wasn’t my only obstacle. This year has been super busy. As I got closer to Christmas, I realized I would not have the time. So I prayed and told Heavenly Father that I was planning on skipping this year, but if it was important, He would need to help me find the time. And He did.

The very next day, an opportunity popped up for me to stay home by myself for the entire day! So I got to spend the day studying, praying, and writing. Which for me, was the best Christmas gift of all!

Included below is the ministering message, a printable, and a cute Christmas ornament idea that goes with the message.

A Tale of Two Kings

When I took a class called “The Bible as Literature” in college, I discovered that looking for literary devices in the scriptures helps me to slow down and notice new things.

One of my favorite literary devices is called a foil. A foil is a character who highlights the qualities of another character through contrast. For example in the Christmas Carol, Charles Dickens uses the warmhearted Fred to emphasize Mr. Scrooge’s cold and greedy personality. The term foil comes from the practice of placing foil behind a gemstone to make it shine more brightly.

A less well-known Christmas foil is the contrast between Jesus Christ and King Herod the Great. By examining the characteristics, values, and motivations of Herod, we can learn a lot about Christ.

In Matthew 2, we see the contrast between King Herod and Christ right away as the stage is set between these two kings of the Jews.

As king of Judaea, Herod would have been considered the king of the Jews. He lived in palaces and had tremendous amounts of wealth and power. He was so wealthy that when the Roman Olympics were struggling financially, he bailed them out.

But the wise men weren’t looking for this king of the Jews. They came to worship the “King of the Jews” — the Messiah who was prophesied to save Israel. When the wise men found their King, He was a small child living in humble and vulnerable conditions.

This Christmas which king are we looking for? We will not find redemption in impressive celebrations or expensive gifts. Let us remember that our greatest gift came from the most humble of circumstances.

I am Alpha and Omega, the beginning and the ending, saith the Lord, which is, and which was, and which is to come, the Almighty.
Revelations 1:8

Herod first came to power when his father appointed him as the governor of Galilee. Later the Romans made him king of Judaea and other regions. But Herod’s power was only temporal and finite, and it was dependent on the approval of Rome. Herod founded the Herodian dynasty, but his dynasty only lasted a few generations. Herod spent his time ruthlessly pursuing something that could never last.

In contrast, Jesus’s eternal title came from a divine father. Before Jesus’s birth, an angel appeared to Mary to tell her that she would be the mother of the prophesied King. The angel explains, “The Lord God shall give unto [Jesus] the throne of his father David: And he shall reign over the house of Jacob for ever; and of his kingdom there shall be no end” (Luke 1:32-33).

Christmas celebrations are temporary, but the Kingdom of God is forever. Like Herod, we miss out on eternal blessing when we spend too much time pursuing the wrong things. Christmas only has a lasting impact when we focus on those things that build our testimonies of the everlasting God.

Son of the Father

Thou art my beloved Son; in thee I am well pleased.
Luke 3:22

Who you serve makes a difference in how you serve. Christ served a Heavenly Father who is committed to our eternal happiness. But Herod served a Roman empire that was only interested in power.

Herod’s pursuit of power was characterized by cruelty and paranoia. According to the Bible, when Herod felt threatened by the birth of the Messiah, he slew all the children in Bethlehem under two years old.

Even in his last days, Herod was ruled by pettiness. As he became sicker, the people started to rejoice over his approaching death. Determined to be mourned more than any other king, Herod locked up the most prominent Judean men and ordered his sister Salome to kill them when he died. That way the streets would be full of mourning instead of rejoicing when he died. Luckily Salome did not follow through on his request.

Herod was willing to go to any lengths to preserve his reign, but Christ is willing to endure anything to preserve His people. As He suffered for our sins, the pain was so exquisite that He prayed to His Father, “O my Father, if it be possible, let this cup pass from me: nevertheless not as I will, but as thou wilt” (Matthew 26:39).

At Christmas, remembering who we serve will change how we serve. We please our Heavenly Father most when we reach out to others with charity – the love of Christ.

For King Herod, maintaining his reign was more important to him than the lives of his family. In fact, he put to death his beloved wife in a fit of jealousy and he killed three of his sons.

Conversely, the Savior’s reign is all about saving His family. In Isaiah 53, the prophet explains that when the Savior makes “his soul an offering for sin, he shall see his seed.”

What does it mean that Christ shall see His seed? When we take upon us the name of Christ, we become His spiritual posterity. And as Christ suffered for us, He saw each one of us intimately and individually as He felt our pain.

This Christmas remember you are seen by a loving Savior who knows all your pains, sins, and sorrows. You are never alone, and you are never unloved.

And are built upon the foundation of the apostles and prophets, Jesus Christ himself being the chief corner stone; In whom all the building fitly framed together groweth unto an holy temple in the Lord.
Ephesians 2:20-21

In an attempt to gain the favor of his Jewish subjects, Herod spent an enormous amount of money to rebuild the temple in Jerusalem. He wanted to build a temple so magnificent that it would “assure his eternal remembrance” (Antiquities 15.380). The resulting temple became one of the wonders of the ancient world and one of its largest sacred edifices. But Herod’s temple only stood for about a hundred years before it was torn down by the Romans.

Herod’s men might have laid the stones of the temple, but it is Christ who is the Chief Cornerstone. As it says in Ephesians 2:20-21, Jesus Christ is the “chief corner stone” and when we are joined together in Him, we become a “holy temple in the Lord.”

In Isaiah 28:16, the Lord explains the importance of this cornerstone when He says, “Behold, I lay in Zion for a foundation a stone, a tried stone, a precious corner stone, a sure foundation: he that believeth shall not make haste.”

When Isaiah says that those who believe in Christ “shall not make haste,” he is playing off the imagery of the sure foundation. The original Hebrew word was “chuwsh,” which some Bible versions translate in this verse as being not shaken or disturbed. When we build off the solid foundation of Christ, we will not be shaken.

Herod’s temple was easily shaken and destroyed because it was not centered on Christ. If you are feeling shaky this Christmas, whether it is because of grief, anxiety, or fear, make time to visit the temple. Attend a session or take your family to see the lights. With Christ as our cornerstone, we will stand steady.

King Herod is not the only foil you will find in the nativity story, but it is one that teaches us the value of a true king. When Herod shows me what a king might be, I am even more grateful for my King. Like the wise men, when we center our focus on the signs of Christ, we too can avoid the faults of King Herod and find the King of Kings this Christmas. 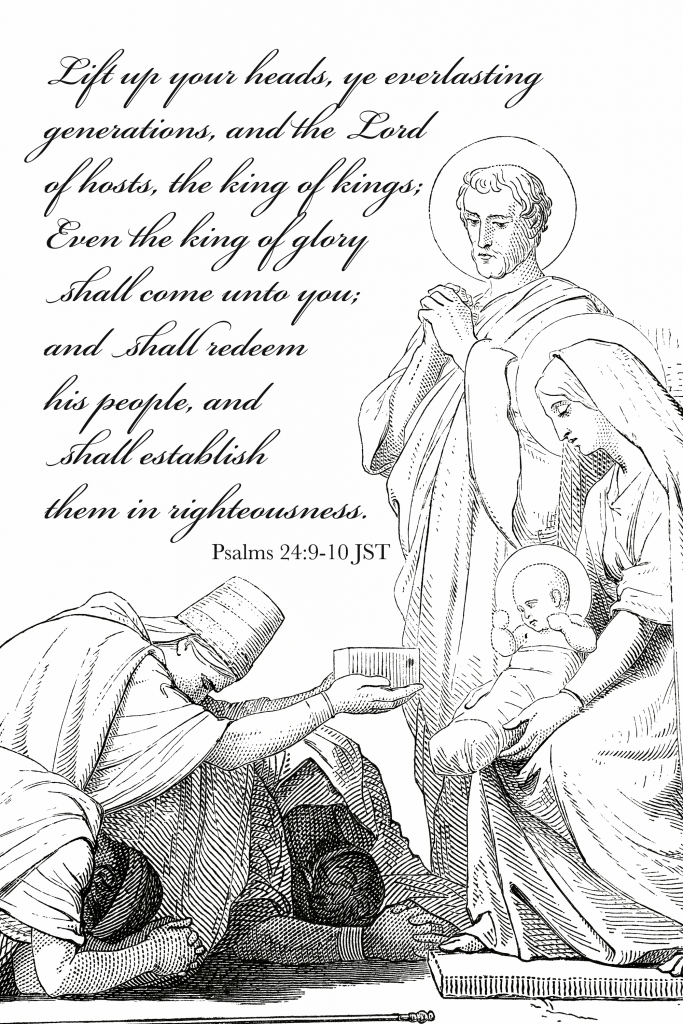 You can print these printables as 4×6 photo prints. My local drug store prints them for just pennies. It is a high-resolution print so you can enlarge it as well. I also made a version with 4 to a sheet that you can print out at home. I like to print these out on kraft cardstock or other paper  that has a warm color and texture.

Artwork Adoration of the Magi (1862) from Gazette Des Beaux-Arts

I like to make Christmas ornaments that go with my messages. That way when I hang them on my tree, they remind me of things I have learned during past Christmases. This one was very simple to make. I bought the wood crowns off Amazon and drilled a hole in the middle for the thread. Then I stained them. Once they dried, I applied the vinyl lettering. If you would like the Silhouette file, just leave me a comment below. The simple wooden crown reminded me of Jesus’s humble birth.

I hope you enjoyed this year’s Jesus Christ and King Herod Christmas ministering message. I challenge you to keep looking for comparisons. There are quite a few that I found that aren’t included here. 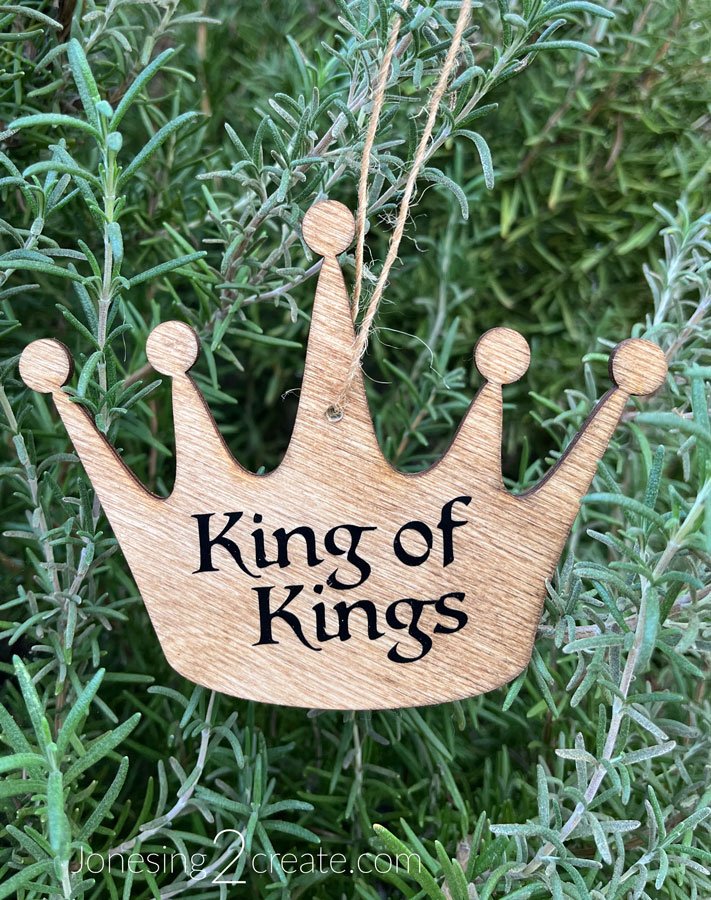 Did you like this December’s 2022 Come Follow Me Ministering message? Find more Relief Society Ministering Printables for the Church of Jesus Christ of Latter-day Saints.
These ministering printables are a great way to help families incorporate the “Come, Follow Me” lessons into their own study. They are also perfect for Young Women’s, Relief Society, Sunday School, or Family Home Evening. I hope that these ministering printables will be a simple way to reach out to those we minister to.