June 2019 Come Follow Me and Ministering – Sunday of the Resurrection 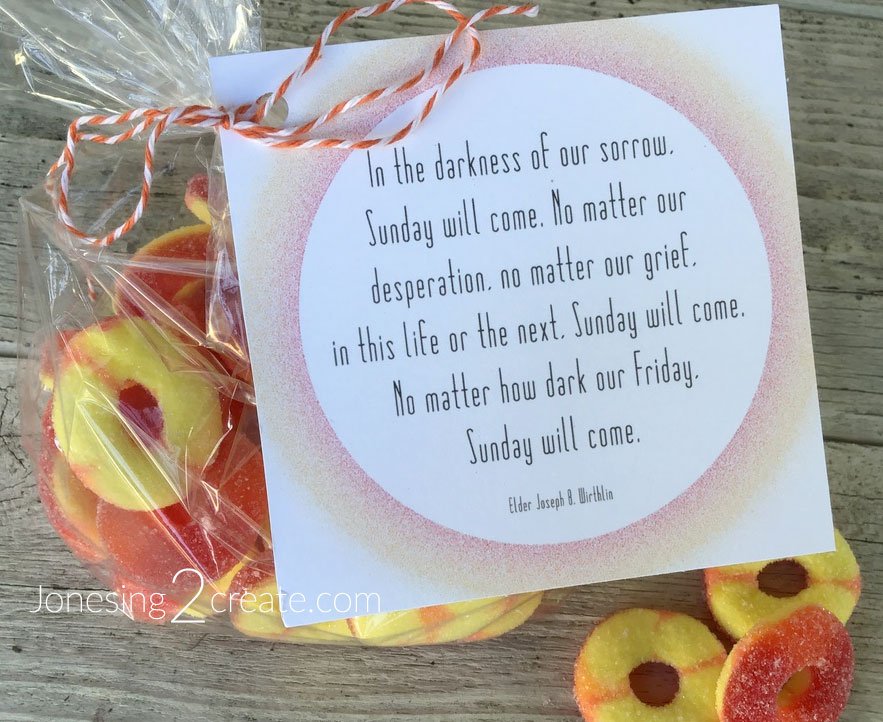 This month, the June 2019 Come Follow Me Ministering Printable talks about how “Because Jesus was resurrected, I too will be resurrected,” in the “Come, Follow Me” manual. This is also a great message for Easter.

These ministering printables are a great way to help families incorporate the “Come, Follow Me” lessons into their own study. They are also perfect for Young Women’s, Relief Society or Sunday School. 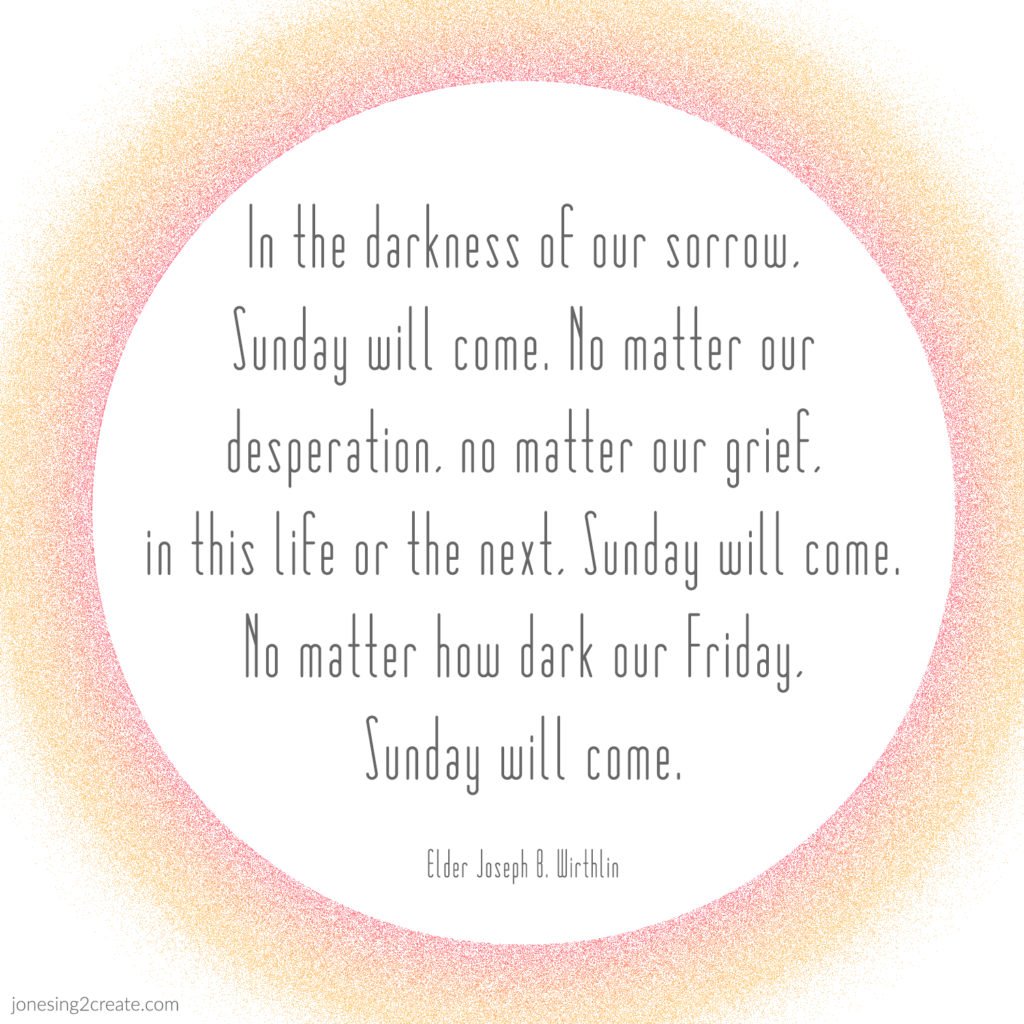 I made the printable to look like the rising sun to go with Elder Wirthlin’s quote. But then I noticed that it also looked a lot like peach gummy rings! It was meant to be! 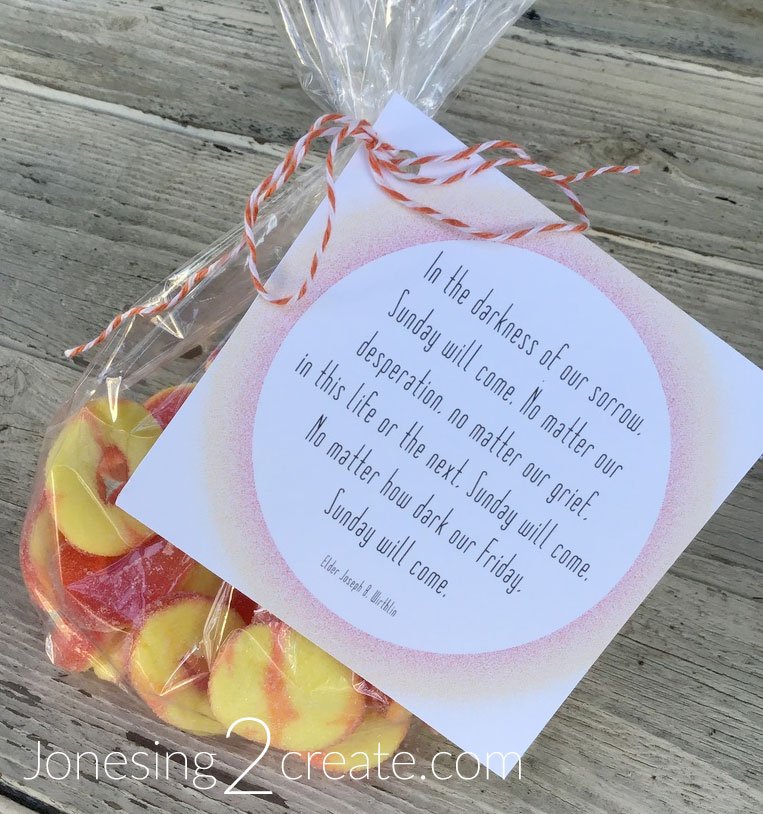 Before the Dawn – Sunday of the Resurrection

When Mary Magdalene came to Christ’s tomb that Sunday morning it was just before dawn. Those early hours when it was still dark (John 20:1). She was worried about Christ’s body and whether or not it had been properly prepared for burial. Friday night everything had been done hurriedly. They had to finish their preparations before the Sabbath on Saturday. I can only imagine that Mary had spent all day Saturday worrying over her Lord. She needed to see His body and know it was properly taken care of. It is no wonder that on Sunday morning she would have come as soon as she could with the needed spices and ointments.

In those dark moments before dawn, we see such a beautiful metaphor to the ordeal they all went through and the hope that was to come, but was not yet visible. That Friday, their Lord had been whipped, mocked, and lifted on the cross. Even the earth mourned as the ground shook and storms raged. The veil of the temple was rent in twain. The apostles were so scared for their lives that they hid inside behind shut doors. In their sorrow, it appeared to them as though Christ had been defeated by those who conspired against Him.

Had they all forgotten about Christ’s promise that he would rise on the third day? Christ had been clear enough that even the chief priests and Pharisees said to Pilate, “Sir, we remember that that deceiver said, while he was yet alive, After three days I will rise again. Command therefore that the sepulchre be made sure until the third day, lest his disciples come by night, and steal him away, and say unto the people, He is risen from the dead.” (Matt 27:63-64)

But it would seem that in their deep sorrow there was no room for hope in the hearts of Christ’s followers. Their minds were so full with the worries directly before them.

Sunday, when Mary goes to the tomb and finds it empty, an angel tells her, “Be not affrighted: Ye seek Jesus of Nazareth, which was crucified: he is arisen; he is not here: behold the place where they laid him. But go your way, tell his disciples and Peter that he goeth before you into Galilee: there shall ye see him, as he said unto you.” (Mark 16:6-7) But she only hears, “he is not here.” She is still worried about Christ’s body. So worried that she misses the fact that she has seen an angel and been told that Christ has risen and that she can see Him in Galilee. With her worries intensified, she tells the apostles that Christ’s body is missing.

As Mary later stands outside Christ’s tomb weeping, two angels appear to her again and ask her what is wrong. Still worried about Christ’s body, she answers them, “they have taken away my Lord, and I know not where they have laid him.”

Then finally Christ appears to her in the garden outside His tomb. But she is so consumed by grief that she does not recognize Him. Instead she asks if He knows where they have laid her Lord’s body. It isn’t until Jesus gently speaks her name that she recognizes Him. And her sorrow is turned to joy. Christ would have deeply understood her sorrow. He had felt it for himself just days before in the Garden of Gethsemane as part of the Atonement.

I think we can all relate to Mary. We have all experienced those gut-wrenching moments of sorrow that totally consume us. Even when it is only moments before the dawn, it can be hard to see the light. Even when we have faith in the Lord’s promises and have seen His miracles. When we are in the midst of the storm, all we can see is storm. The dark feels so thick that we cannot even imagine the light.

Like Mary, we fixate on our worry. We fixate on the empty tomb and fail to see the resurrected Lord. But He loves us and will call for us, just as He called for Mary. And like with Mary, He intimately understands our grief.

Elder Joseph B. Wirthlin explains that, “Each of us will have our own Fridays—those days when the universe itself seems shattered and the shards of our world lie littered about us in pieces. We all will experience those broken times when it seems we can never be put together again. We will all have our Fridays.

I think getting stuck in the Fridays of our lives is a very human experience. Even Christ’s closest followers mourned in those dark moments. But I know that joy comes when we can cling to the hope of our Sundays. I know that by turning to Christ that one day we will be reunited with those we love. One day not only our bodies, but our hearts will be made new. I know that Christ has not only felt my sorrows, but prepared a way for me to walk back to Him in the light.

Did you like this June 2019 Come Follow Me Ministering Message? Find more Relief Society Ministering Printables for the Church of Jesus Christ of Latter-day Saints.