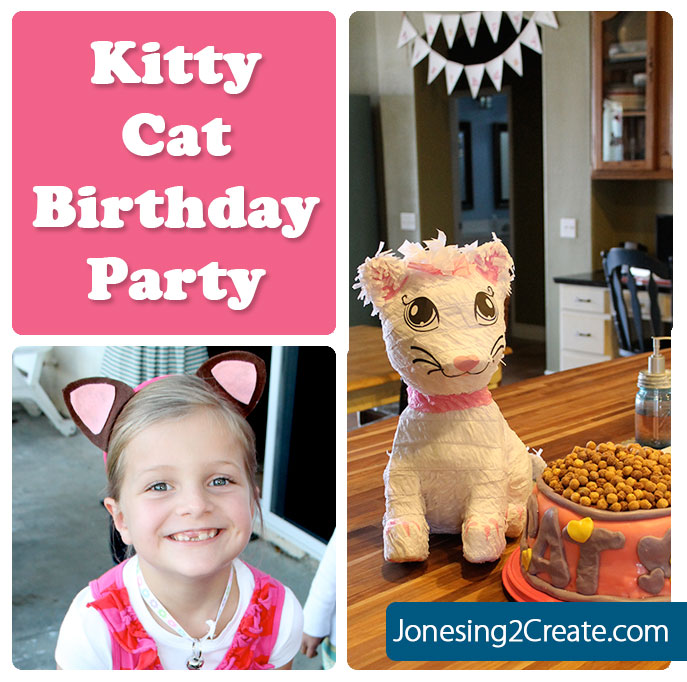 My little preschooler is obsessed with cats. She spends about 30 percent of her life pretending to be a cat. Which is fine by me—as long as she is a well-behaved cat! I figure role playing is a great way for kids to use their imaginations.

So for her birthday having a kitty cat party was a no brainer.

I told myself that I wouldn’t go crazy with it, but who are we kidding? I love this stuff! And I only have a few years of being able to plan parties like this for my kids before they are too “cool” for it. But I did try to keep the guest list small. D– is often overwhelmed by big crowds and since it was her birthday I wanted to make sure she could enjoy it. Although I love planning parties, I always make sure that they are about my kids, not me.

For the tuna fish sandwiches I used this amazing tuna fish salad recipe. I couldn’t stop eating it! The best is when you pair it up with some sliced tomato and Swiss cheese and serve it on a croissant. Amazing! I also had some other cold cuts and did a sandwich bar for those who didn’t like tuna.

I also bought some cat food dishes at the 99 Cent Store and used them to serve some of the food!

For the cake I made a huge cat dish cake. A lot people didn’t realize that it was a cake at first and thought it was an actual bowl full of cat chow! 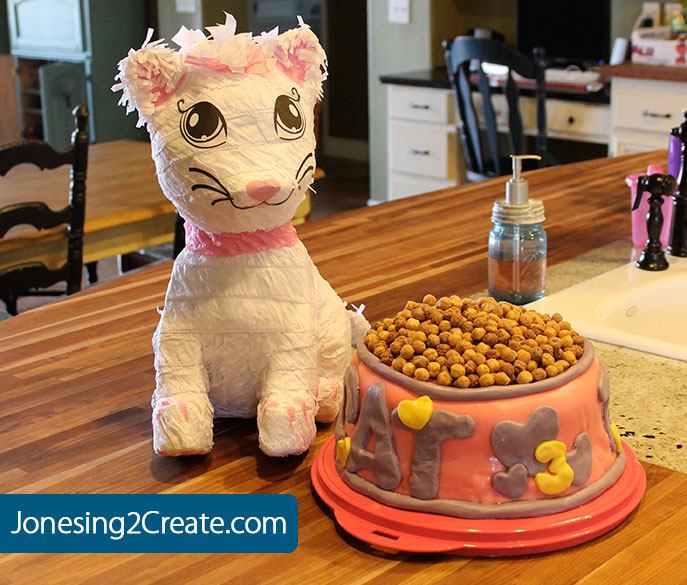 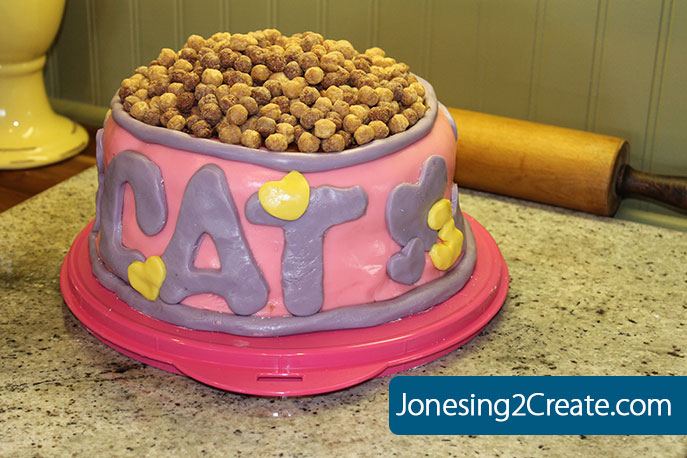 It was my second time using fondant and this time I did a much better job at making the fondant. I used the marshmallow fondant recipe again because it is so much better than the real stuff.

The tricky part was getting that huge piece of fondant over the cake. But with a little wax paper and a rolling pin, we were able to get it up and over it. I used this method and rolled the fondant over my rolling pin first. But my fondant kept sticking to itself, so I used a layer of wax paper over it so that it wouldn’t come into contact with itself when I rolled it up. It worked great.

The inside of the cat dish is filled with Reeses Puffs. I added some frosting to the top of the cake so that the cereal would stick better.

I then added D—’s name around the edge just like a real cat bowl. I used these great letter cookie cutters

so that I didn’t have to trace out each letter.

For the party we all pretended to be cats. So I made ears, tails, and collars with little bells for all the kids. I love to do party favors that can be reused later and thought that these would be great for adding to the “dress up” box. I hate spending too much time on things that I know will just be thrown away.

To make the tails, I bought some Marabou feather boas with the fluffy feathers and cut them into shorter pieces to make tails. I didn’t want to use safety pins, so I hand sewed them to little clips so that the kids could clip them on.

For the ears, I just cut out ears out of felt and glued them onto headbands.

I did the collars with Velcro so that they could easily come off if any pressure was put on them. That way there weren’t a strangling hazard if they got caught on something. I always do all my capes and stuff with Velcro because it is so much safer.

For the bells, I added them to those cheap little key chain rings and strung them onto the collars. I also got some cheap charms off of ebay.com so that the kids could pick one to add to their collar. It turned out super cute!

When the kids came in, the first thing they saw was the cat dress up booth where they could pick their ears, collar, bell and charms. 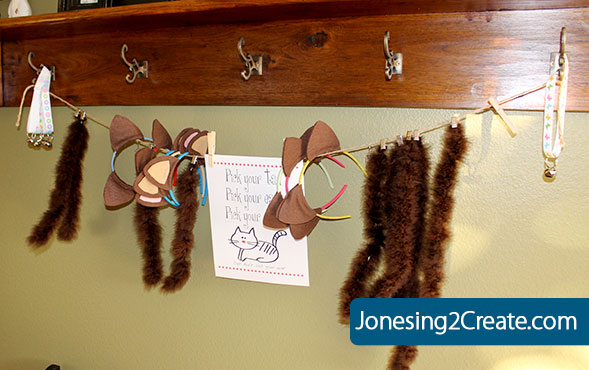 After the kids were all dressed up, we added the final touch and face painted on whiskers and a nose.

Weeks before the party D—‘s brother was adamant that he was NOT going to dress up as a cat but would be going to the party as a “human.” I told him fine, that I didn’t care. But once the party got started he was one of the first to excitedly put on the ears and the tail. I was careful to make some more masculine ears and collars for the boys who were attending.

The Yarn Game: What cat doesn’t love to play with yarn! Have the kids first stand in a circle with a ball of yarn. Pick one child to go in the middle. The kids then toss the ball of yarn across the circle to each other, wrap it around themselves, and then throw it across the circle to somebody else. It doesn’t take long before everybody is all wrapped up in a crazy, yarn spider web. The kid in the middle then has to try to wiggle out of the yarn web to get free. 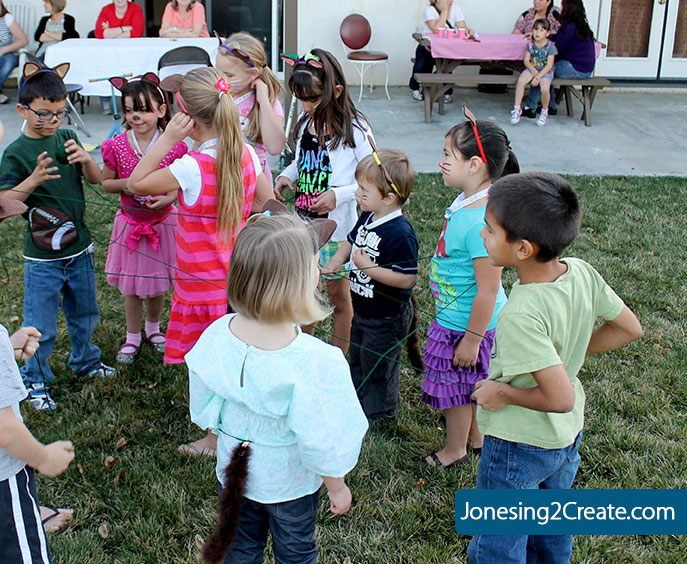 Mouse chase: Tie balloons with mice drawn on them to the feet of the kids. The kids then chase each other and try to pop the other’s balloons.

from amazon.com and then hid them all over the yard for the kids to find. This was a huge hit and the kids liked bringing home their own cats. 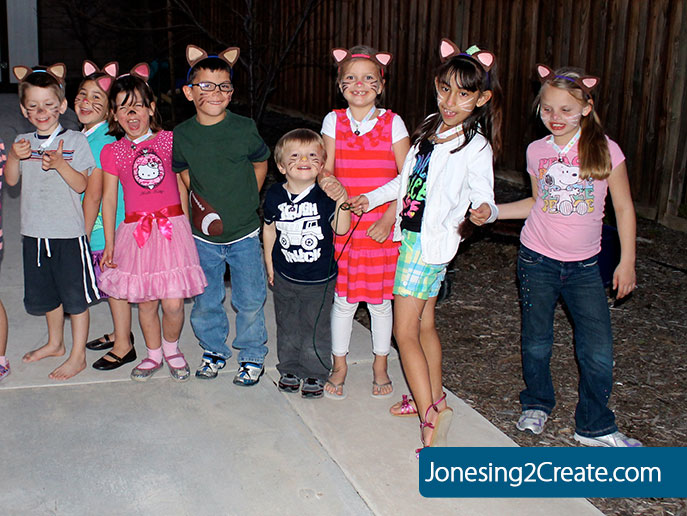 Cat Piñata: I am a firm believer that a party is not a party without a piñata. I wanted to find a mouse piñata so that the kids (or kitties) could all “swat” at it. But I could find one I liked.

And then I found this great kitty cat pinata

for an amazing price.

At first I was a little worried about how D— would respond to us beating a cute little cat piñata too death, but she took it just fine. About a year before she broke down crying at a birthday party when they started hitting her beloved Thomas the Train. No matter how much we told her it was just a piñata and not the “real” Thomas the Train, she would not be consoled. And really, it does look a little barbaric to beat the party mascot until it breaks open.

Cat Craft: I saw the cutest little Halloween cat craft on amazon.com and thought that would be perfect to do.

As always I like to keep the decorations pretty simple at kids’ parties. I have noticed that they usually don’t really care about most of the decorations and that my efforts are better focused on party favors and games. This party was no exception. Besides a couple of cute cat signs, I just used some streamers and balloons.

I did make a birthday banner, but I was able to do it just using some sticker letters I found at the 99 Cent Store. It was super easy to just cut out the triangle banner pieces, stick the stickers on, and thread it through a ribbon!

I also cut out some cat die cuts from Silhouette that I stuck around the house.

The party was a blast and I totally loved watching the kids run all over the yard dressed as cats! I even got into it and painted some whiskers on my face and put on ears and a collar. I totally love having kids because it is the best excuse for acting like a total goof!

If you aren’t up to making a cake, I totally loved this cat cupcake decoration kit.


If you are doing more of a Hello Kitty theme, these were super cute!


We just used pink plates and napkins, but this would have been fun too.


If you aren’t up to making your own ears, last I checked these were on sale for $0.59!