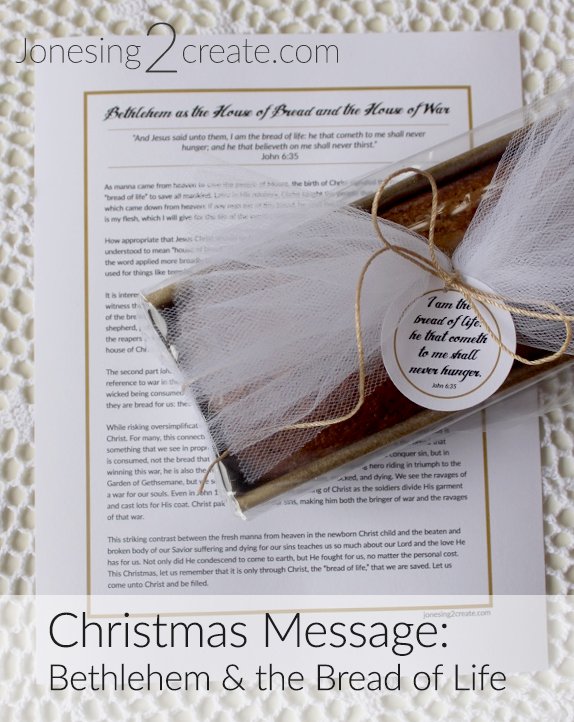 Every December, I like to study an aspect of Christ’s birth that I hadn’t thought much about before. Sometimes we get so used to the Christmas story that we start to tune it out. I have found that by approaching it with fresh eyes that I am able to find deeper meaning in the Christmas season.

This year I became fixated on the idea of Christ as the “bread of life.” I am an English major and Spanish minor, so I am a bit of a word geek. I love to learn about words, their roots, and their meanings, so when my studies this month took me on a wonderful linguistical journey, I was thrilled. Language is complicated and I have always been impressed with the way that God intertwines surprising meanings through a narrative that covers thousands of years and was written in several languages and later translated into hundreds. The complicity of it all is mind boggling. Like many Christian scientists who see the hand of God in the delicate balances of complicated patterns in nature, I too see His hand in the complicated connections and the interplay of language in the scriptures.

Although, I am not familiar with Hebrew, I worked hard to search for multiple reliable sources while studying this. It is good to note that like all language, especially one that was used so long ago, there are some differing opinions. So the following message falls more under the category of sermonizing rather than an academic paper.

When I stumble on something good, I have tried to make it part of my Christmas message to the sisters I visit teach. So this year, I baked a loaf of bread and with the message attached.

“And Jesus said unto them, I am the bread of life: he that cometh to me shall never hunger; and he that believeth on me shall never thirst.”
John 6:35

As manna came from heaven to save the people of Moses, the birth of Christ signaled the coming of the “bread of life” to save all mankind. Later in His ministry, Christ taught the people that, “I am the living bread which came down from heaven: if any man eat of this bread, he shall live for ever: and the bread that I will give is my flesh, which I will give for the life of the world (John 6:51).”

How appropriate that Jesus Christ should be born in Bethlehem, which is actually two Hebrew words generally understood to mean “house of bread.” The Hebrew word bayit is a common word for house in the Bible, but the word applied more broadly to a kind of enclosure used for safekeeping. For example, the word was also used for things like temples, animal pens, or an entire household and family.

It is interesting to think of this broader meaning in relation to the sacrament. As we partake of the bread, we witness that we are willing to take upon us Christ’s name and join the family of Christ. In a way, by partaking of the bread, we become of the house of bread. Equally beautiful is how bayit ties into the imagery of the shepherd, gathering his flock into their protective enclosure for safekeeping. Or the image of the harvest and the reapers bringing in the wheat to protect it from the winds and rain. Likewise, we are gathered into the house of Christ for safekeeping.

“Only rebel not ye against the Lord, neither fear ye the people of the land; for they are bread for us: their defence is departed from them, and the Lord is with us: fear them not.”

While risking oversimplification, the alternate meaning of laham is an interesting one in the context of Jesus Christ. For many, this connection has pointed to Christ bringing war and consuming the wicked (and this is something that we see in prophecies about the second coming). But in Numbers 14:9, it is the bread that is consumed, not the bread that does the consuming. Christ was born to win a war and conquer sin, but in winning this war, he is also the victim of that war. We do not see the conquering hero riding in triumph to the Garden of Gethsemane, but we see the humble Savior being beaten, mocked, and dying. We see the ravages of a war for our souls. Even in John 19, we see the figurative spoiling of Christ as the soldiers divide His garment and cast lots for His coat. Christ paid the price for our sins, making him both the bringer of war and the ravages of that war.

This striking contrast between the fresh manna from heaven in the newborn Christ child and the beaten and broken body of our Savior suffering and dying for our sins teaches us so much about our Lord and the love He has for us. Not only did He condescend to come to earth, but He fought for us, no matter the personal cost. This Christmas, let us remember that it is only through Christ, the “bread of life,” that we are saved. Let us come unto Christ and be filled.