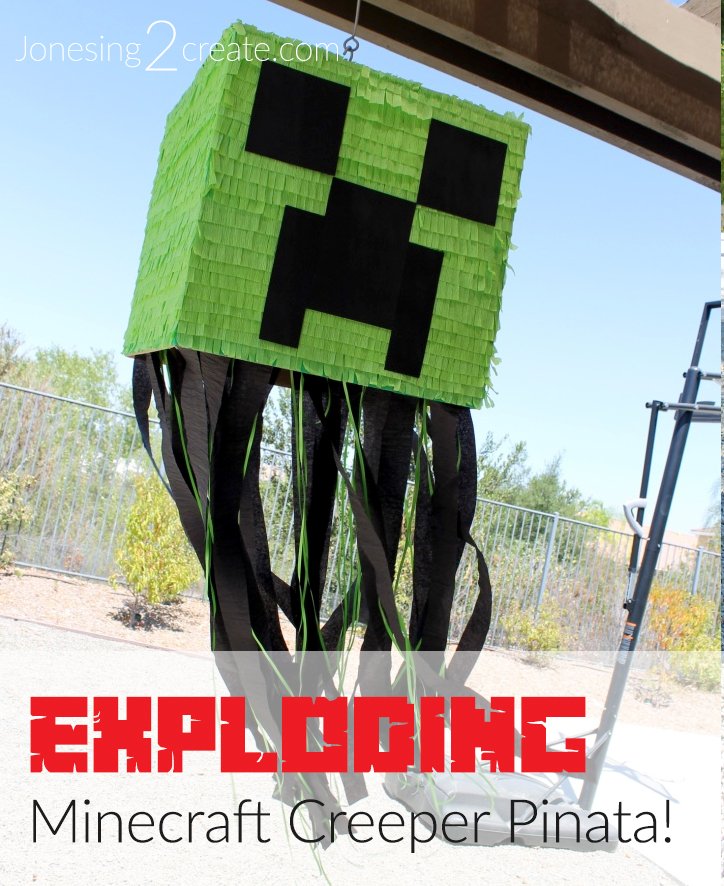 My husband and I figured that a Minecraft Creeper pinata really ought to explode. Obviously, actually blowing up a pinata at your kid’s birthday party is a bad idea, but I was able to figure out how to add a little bit of “boom!” to things.

I ended up attaching the pull strings to party poppers so that they let out a bang whenever one was pulled. And then when the pinata opened up, I had hundreds of snap bangs come spilling out of the pinata and onto the floor. I also filled the pinata with bouncy balls so that they went everywhere. Plus, I guess Creepers drop experience balls when you kill them so it made for a fun tie into the video game. Between the popping of the snap bangs and the explosive bouncing of the balls, the effect was awesome!

1. When cutting the ice cream container to fit inside, just cut the slices long enough so that the bucket fits in there snugly. You may need to play with it a bit to make sure the container maintains its round shape so that the lid still fits on securely.

2. It is faster to fringe the streamers if you fold several layers of streamer together on top of itself and cut the fringe on all the layers at the same time. I used Elmer’s glue to glue on both the green paper and the fringe.

3. I cut the face out using black construction paper and a Creeper face template I found online. I then just glued the face on over the layer of fringe.

4. I used packing tape to make sure the party poppers were taped in securely so that it set them off when the string is pulled. I also added some dummy strings that weren’t attached to anything so that the kids didn’t know if they were going to get nothing, a pop, or the whole thing opening up.

5. You will want to be careful what you fill the pinata with and that it isn’t too heavy. The lid only takes a slight pull to open it up and you don’t want everything to come out accidently. If there is a lot of heavy candy in there, it might open up accidently. I filled mine with bouncy balls and it was too heavy for the lid to support it. I ended up having to tape the lid closed in two spots to help stabilize it.

6. To help the trigger string blend in, I loosely taped it to the side of the box. You don’t want it hanging in the middle or it is a dead giveaway.