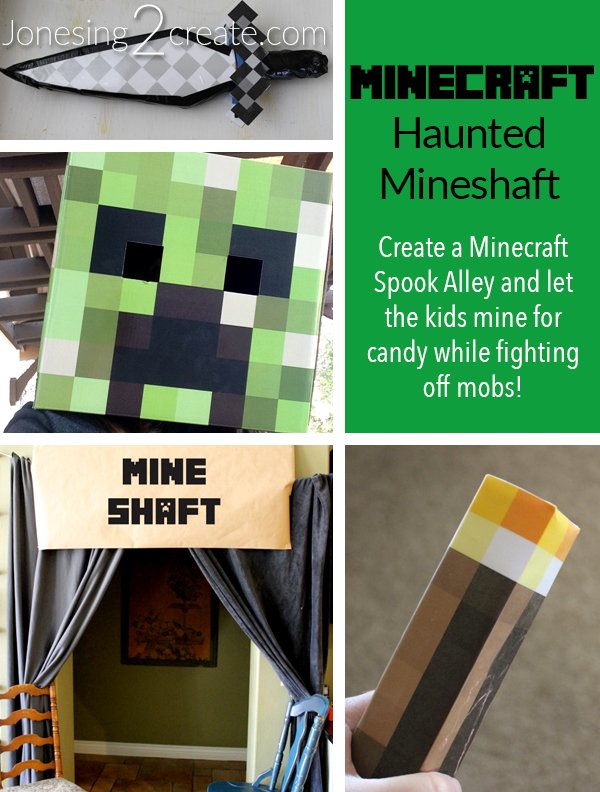 When trying to come up with a Minecraft party game, we decided to try for a little Minecraft LARP (Live Action Role Play). Some of the most intense moments in Minecraft are when you are in the mineshaft, so we turned our hallway into a dark and scary mineshaft. My husband dressed up as different mob characters and scared the kids to death while they mined for candy. At the party, the mineshaft became a kind of rite of passage to manhood and the boys couldn’t stop talking about it. It is funny to see how seriously nine-year-old boys take something like a “spook alley.” While we kept it pretty mellow, some of the boys were pretty scared and were so proud of themselves for getting up the guts to do it.

Setting up the Mine Shaft
1. You will want to get things as dark as you can. We blocked the entrance to the hallway with some fleece blankets. The fleece works great because it is lightweight, but doesn’t let a lot of light through. Luckily I had two grey blankets so that it looked like the color of a stone wall, but you can also get a stone wall tablecloth to cover the opening with. It is a lot cheaper than the stone wall backdrops.

We already had blackout curtains in the kids’ bedrooms, which made it easy for my husband to sneak in and out of the rooms to scare the kids.

2. I made a huge sign to go over the top of the mine entrance with some craft packing paper. It was cheap and easy.

3. Since it was dark in the hallway, I made the boys a Minecraft torch to light their way. I used the template at beafunmum.com and covered it with contact paper to make it more durable. I also reinforced the inside with corrugated plastic. When you add the flickering candle to the inside, it gives you just enough light to see by, but it stays dark enough to be creepy.

4. You will need some costumes for the mobs. I ran out of time to make the heads, so I bought the premade Creeper and Enderman heads on Amazon.


My husband was able to make the Enderman head look like a cave spider head by putting on red construction paper eyes on the other side. We then bought some silly string for him to shoot out at the kids. The boys never knew which mob character was going to come out next.

5. The boys also needed a weapon, so I repurposed a foam sword I found at Dollar Tree. I just printed out the pixelated design of the sword and used black duct tape as the edging.

6. You will want some sound effects too, so my husband played All Creepy Minecraft Sounds (Cave) off of Youtube.

7. To mine the candy, we sealed up large boxes and then cut hand-sized holes into the side and stuck some candy in them. The boxes were scattered all over the hall with some stacked on top of each other. The boys had to find the boxes and dig around for the hole to get the candy out. The only light they had was the torch. We quickly learned though that most of the boys were too intent on watching out for mobs to even look for the candy.

Mine Shaft Instructions
1. We only sent in one boy at a time. It is a good idea to stagger this with another activity so that you don’t have all the boys just sitting around waiting for their turn. Each boy was armed with a torch, a sword, and a bag for candy. Hitting a mob with the sword would cause them to retreat or go away.

2. We told the boys that they had to dig around for the candy, while also keeping an eye out for mobs. If they got touched by a mob without beating him off (that is why the sword should be foam!), then he was out and it was the next person’s turn. But we also put a time limit on it so that they didn’t stay in there forever.

3. We told the boys that there was candy in the boxes and that they had to dig around to find how to get it out. This part was a little confusing to them, so it would be a good idea to give them a demonstration with the lights on.

4. While the boys dug around for candy, my husband would sneak out of the bedrooms and closets and try to scare them. Because the bedrooms were so dark, we put some of the boxes in the rooms too and my husband mostly hid in the closets. When he was dressed as the Creeper, he would occasionally step on those inflated packing pillows to make a loud pop sound. For the cave spider, he shot out silly string.