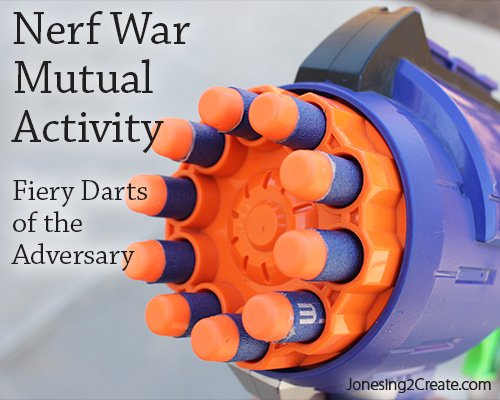 Forever the young women have been begging to have a Nerf gun war for a mutual activity, but we have never been able to figure out how to get enough guns and darts for everybody.

But just recently we started playing a game with our kids that I realized would work perfectly for a mutual activity Nerf war. A few weeks ago my husband went a little Nerf crazy and bought a whole arsenal of Nerf guns. I was a little dubious about the purchase, but have to admit that I love the epic Nerf battles he has with the kids every night. I love hearing the kids’ hysterical giggles as he chases them around the house and Ladybug has become a master at the art of concealment and surprise. She makes her mommy so proud.

The best part of this mutual activity is that the Nerf war can also be used as an object lesson so that there is a spiritual tie in.

Purpose:
To teach the youth how to protect themselves from the fiery darts of the adversary.
“And I said unto them that it was the word of God; and whoso would hearken unto the word of God, and would hold fast unto it, they would never perish; neither could the temptations and the fiery darts of the adversary overpower them unto blindness, to lead them away to destruction.”
1 Nephi 15:24

The Game:
The object of the game is to sneak over to the other side of the cultural hall and capture the flag without getting hit by a Nerf bullet.

Introduction:
Start off by reading and discussing 1 Nephi 15:24. Questions to ask include:

Explain to the group that the object of the game will be to avoid the fiery darts of the adversary. Everybody will line up along the wall furthest away from the ladder and will try to get the flag on the other side without getting hit by a dart. Have a leader climb on top of the ladder and try to shoot the youth as they try to cross the cultural hall. If they get hit, they are out for that round.

Depending on your group size, you may want two or three leaders up on ladders on either side of the flag. It is also helpful to have an automatic Nerf gun with clips or one that can fire off several darts without reloading. I also suggest having a few loaded Nerf guns accessible and somebody to help with loading so that the leader can keep up a continuous stream of fire. Having a few leaders acting as referees also helps.

Round One:
Have the youth try to get to the other side of the cultural hall without any type of cover at all. Afterwards talk to them about how exposed they were and about how hard that made it. Ask them if it would be easier with some protection.

Round Two:
Bring in the small tables from the hall and set them up as barricades from the darts. Placing sheets over them is an easy way to block the darts and give the youth some place to hide. Afterwards, talk about how having the protection made it easier. But tell them that it would be even better if they had protection they could take with them. That the tables are kind of like going to church or seminary, but not really carrying the word of God in your heart. It will offer you some protection, but it will only be temporary and you are still vulnerable.

Round Three:
Bring out the duct tape, scissors, and cardboard. Allow the youth to make armor and shields for themselves. Tell them that if a dart hits the armor, that the hit does not count. It has to hit a part of their body that is not protected. While making the armor, draw parallels between the armor they are making with 1 Nephi 15: 24.

Explain that the word of God:

Give the youth a set amount of time to finish the armor. Explain that we are only given so much time to prepare while on this earth. If we waste our time, we will not have the protection we need when we need it. After the round ask them how different they felt with the armor on. Ask them what else they learned.

You can also talk about Ephesians 6:13-17.
“Wherefore take unto you the whole armour of God, that ye may be able to withstand in the evil day, and having done all, to stand. Stand therefore, having your loins girt about with truth, and having on the breastplate of righteousness; And your feet shod with the preparation of the gospel of peace; Above all, taking the shield of faith, wherewith ye shall be able to quench all the fiery darts of the wicked. And take the helmet of salvation, and the sword of the Spirit, which is the word of God”

If you are looking for a good place to get darts, we ordered ours from Amazon. They have some great deals on knock offs, but I have learned that the rubber tips are a lot harder on those. So if you have tough youth, go with the cheap ones. But if you are worried about the darts stinging, then you should buy the Nerf ones. The Nerf ones really don’t hurt at all. My kids can take a hit with those no problem.  And if you like to be on the safe side, it is a good idea to have the youth bring their own safety goggles or glasses to protect their eyes.