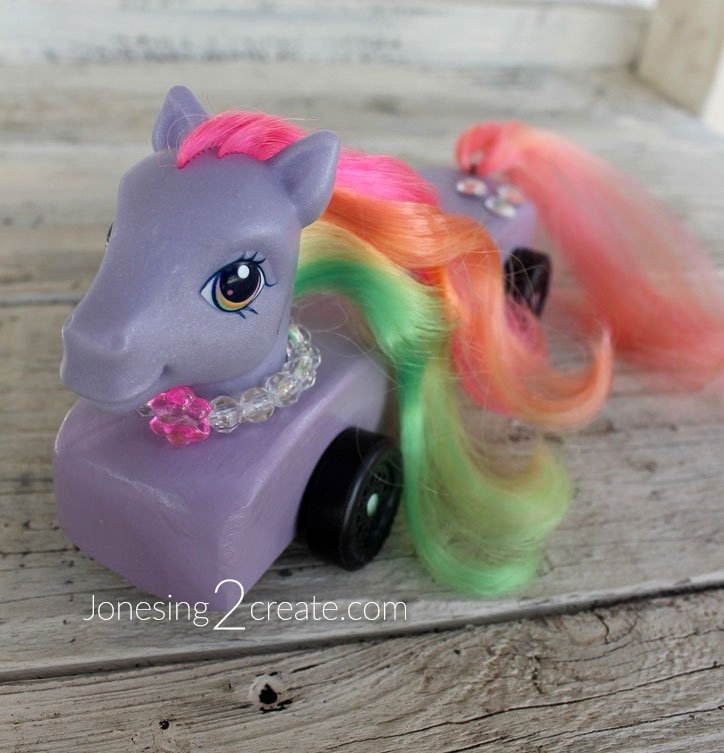 We are at the end of an era. This year is our very last Pinewood Derby Race. When you only have two kids who are just a couple of years apart, the milestones seem to fly right by. But we are ending our Pinewood Derby stint with a bang! I can’t tell you how much I love Ladybug’s My Little Pony Pinewood Derby Car. It is the brainchild of my husband and came out even better than I had imagined. Just looking at it makes me happy. 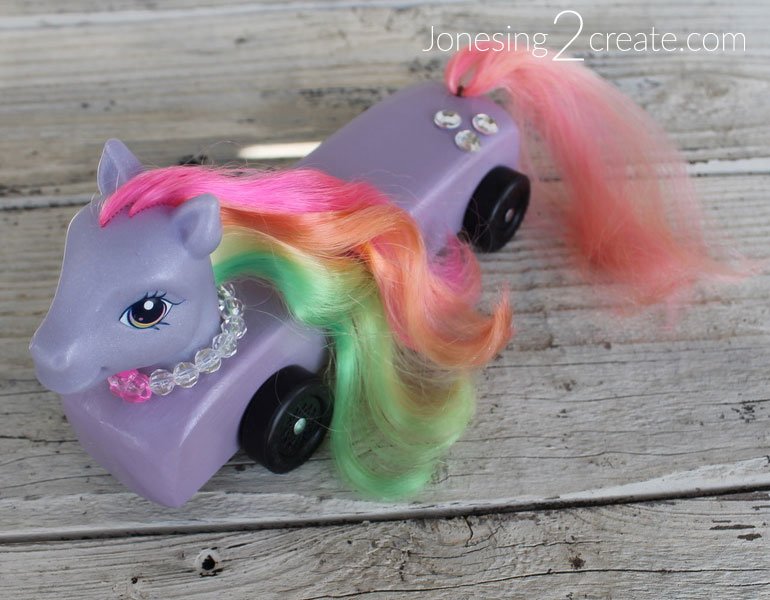 Like my dad always did for me, we let Ladybug compete in the Pinewood Derby too. Over the years lots of her friends have joined in and this year the troop is even putting up a second track for guest racers. The girls have definitely added a lot of bling and color to the races!

My favorite part is that Ladybug is learning how to work with tools and gain confidence with woodworking. I love watching her with her little safety goggles on with the sander blasting or helping out at the drill press. She is just like her momma!

This was actually a very easy car to make. While her daddy held the belt sander, Ladybug carefully sanded down the corners to give it a nice smooth top. She then painted it a purple that I carefully mixed to match the color of the My Little Pony.

While the body was drying, we went to work on one of her old My Little Ponies she didn’t want anymore to get all the snarls out of her hair. It was a mess! We used a lot of leave in conditioner and a Wet Brush. Only a girl’s Pinewood Derby Car would require hair styling!

I then popped the leg off so I could reach in and pull the tail out from the inside. I am not going to lie. Dismembering a My Little Pony felt so wrong.

Then came the tricky part. Unlike Barbie heads, the My Little Pony heads are stuck on there pretty well. If you want to risk it, you can just use brute force to pop the head off. But I found that the plastic was a bit brittle, so the head snapped off instead of taking the little flange part inside the body with it. We got lucky and it snapped in a place where you can’t see. But if you are worried, I would recommend cutting the body open and taking off the head that way. It will also make it easier to attach the head because you can drill a hole in the front of the car for the flange to sit in. It would hide the glue better and give you more surface area for the glue to adhere to.

But we didn’t have a flange, so I was stuck trying to glue it on by putting glue only around the edges of the head. Hot glue won’t do the trick, you will need something like Gorilla glue. However, Gorilla glue dries puffy, so you could see the glue around the head after it dried. So Ladybug and I made her a necklace to hide the glue.

To attach the tail, we drilled a hole in the back and down to the bottom. I then wrapped some wire around the tail and then pulled it through the hole and secured it to the bottom of the car with hot glue.

We were worried about the hair causing problems in a race, so we brought a hair tie to keep everything out of the way. The My Little Pony Pinewood Derby Car wasn’t very fast, but what she lacked in speed, she more than made up for in style!