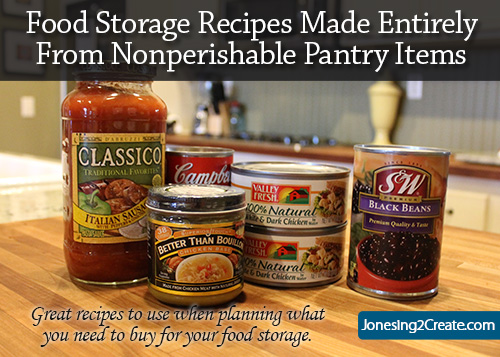 When I think of food storage the first thing that comes to mind is weird dehydrated food that I will never end up eating. So instead I pulled together some recipes that can be made entirely with pantry items that I use on a regular basis. These pantry food storage recipes are great to use when planning what you need to buy for your food storage. Next week I will be covering some easy ways to do this.

I like to keep all these recipes on a handy reference sheet and then keep it with my food storage. That way I don’t have to go digging for them if there is an emergency.
Download Pantry Food Storage Recipes Reference Sheet (PDF)

Six Can Chicken Tortilla Soup
See Recipe
This recipe was made for food storage! And it is actually really, really good and kid friendly.

I used to store chicken broth for this recipe, but it takes up a lot of room. So I started to store “Better Than Bouillon.” It is really good and it has saved me a ton of space and money. However, you will have to make sure you store enough water to reconstitute it. Also, once it is open I keep it refrigerated so that it lasts longer because I don’t use it up super fast. One tbsp equals 8 oz of chicken broth. You can buy it online, but it is usually cheaper in the store.


When I make the soup normally I like to serve it with grated cheese and tortilla chips, but I figure in a pinch it would be fine without them.

But just in case I have also stored the ingredients I need to make flour tortillas. I use this tortilla recipe because it only calls for pantry items.

Chicken and Rice or Tuna Rice Casserole
See Recipe
For this recipe you could easily use chicken or tuna. I use tuna because my kids love tuna fish sandwiches. We go through a lot of tuna, so it is easy to rotate. Then I store regular rice instead of instant rice. Also, instead of using cream of chicken soup, I store cream of soup mix. It stores longer, has fewer preservatives, is cheaper, and take-ups less space. 1/3 cup of mix equals one can.

Easy Red Beans and Rice
See Recipe
Kielbasa isn’t exactly a pantry item, so I decided to use Spam instead. Not a huge fan of Spam, but I thought it would be easy to get sick of canned tuna and chicken real fast. Plus I have learned a fun trick with Spam—it is actually pretty good if you fry it. While it isn’t super healthy, I thought it wouldn’t kill us to eat once in awhile and I wanted some variety. When I make this meal normally I just use kielbasa instead of the Spam.

I also substitute the green pepper for green chilies. And for the oregano, I have some growing in our backyard. It is pretty hardy and easy to grow.

Tuna-Au-Gratin
My mom used to make this when we were little and we loved it. When I make it normally I use the Marie Calendar’s frozen pie crust because it is so yummy, but I also store the ingredients to make it from scratch if needed. I also figure we can skip the cheese if needed and I use canned peas instead of frozen.

Directions
Combine in a saucepan over medium heat, the soup, milk, flour, and onion. Cook until thickened. Remove from heat. Add peas and tuna. Put filling into baked pie crust. Sprinkle cheese on top. Bake at 400F for 12-15 minutes.

Here is the recipe I use for the pie crust

Spaghetti
Yeah, this is kind of a no brainer. Buy a can of spaghetti and some noodles. It doesn’t get easier than that!

Rainbow Bean Soup
See Recipe
This is super yummy and it stores forever. I always make the mix and then store. However, this last time I was lazy and just bought these online.

Fried Rice Guam Style
I love fried rice and usually do it with ham, but I found out that in Guam they use Spam. I thought it was worth a shot and it was actually pretty good.

I use the boxed Rice-A-Roni fried rice mix and cook it while frying the Spam on the side. I then add them together once the rice is done. It is also really yummy to scramble some eggs in with the cooked rice before you add the Spam.

The above recipes are the ones I am currently using for my food storage, but I have also found some other recipes below that would be great. And if you have any suggestions, I would love to add them!

Middle Eastern Rice with Black Beans and Chickpeas
See Recipe
You don’t normally think of cumin as a food storage staple, but I LOVE it and figure that living off food storage is no reason not to eat amazing food. On this dish you could either store the individual spices or create your own mix by adding the spices to a zip-lock baggie with the rice. And I absolutely recommend using basmati rice and not substituting it with white rice. Instead of the ground turkey, you could substitute canned chicken or leave it out entirely. The recipe has plenty of protein with just the beans. Surprisingly this recipe is fairly kid friendly. The only things that my kids won’t eat are the garbanzo beans. However, they are used to a mom who uses curry more than she does seasoning salt.