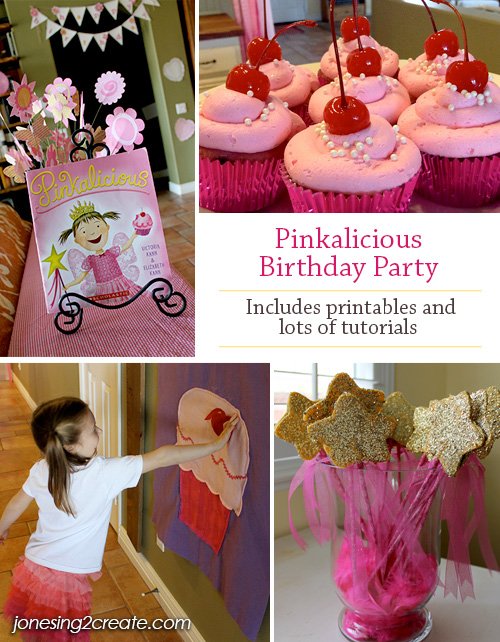 I am not a big fan of pink, but apparently my little girl didn’t get the memo because she lives and breathes the color. So we decided that this year a Pinkalicious birthday party was just the thing. I love doing birthday parties that are based off books, and I am so glad that I haven’t been roped into a princess party yet. I like princesses even less than I like pink. I grew up in the era of Sleeping Beauty and Snow White and the idea of a heroine that spends most the story asleep never appealed to me.

But Pinkalicious is cute, spunky, creative, and independent. And I can totally relate to wanting to eat just one more cupcake. We decided to make it her first all-girl party. Let’s be honest, boys would ruin a pink party. Bless their little hearts I love them, but it is just the cold, hard truth. So G–‘s brother and cousin were the two lone males in the group. B– even decided to set up his own little “war party” for the two of them, but was soon drawn out by all the festivities. 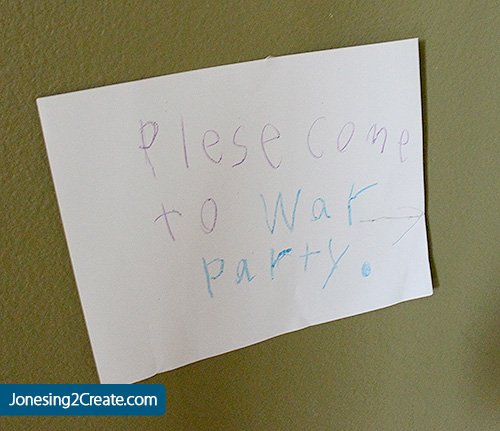 Hubby wasn’t too thrilled about the theme either. He had just a little too much fun with the last Harry Potter party and thought this was a big let down. But I told him that it was not his party and that G– was beyond excited. And there were some pluses to having him less involved with the planning. For the last party he tried to talk me into making a boggart pinata that changed into something else every time a different kid hit it, like in the book and movie when they did the stand off in Professor Lupin’s class. Uhm, what!?!? Great idea, but can you even imagine the engineering that would have to go into figuring out how to do that?!? Yeah, it was nice throwing a party where the expectations were a little more realistic…

And while I have to admit the Potter party was way cooler, the Pinkalicious party was perfect for a group of 4-5 year old girls. They all showed up dressed to the nines in pink. You could tell that they had all taken the business rather seriously. It kind of felt like prom. It was so stinking adorable!

For the invites, I just threw something together in Photoshop. I also Photoshopped G–‘s face over Pinkalicious. Hubby said it looked creepy, but I thought it was hilarious. Here is the version without her “creepy” face. 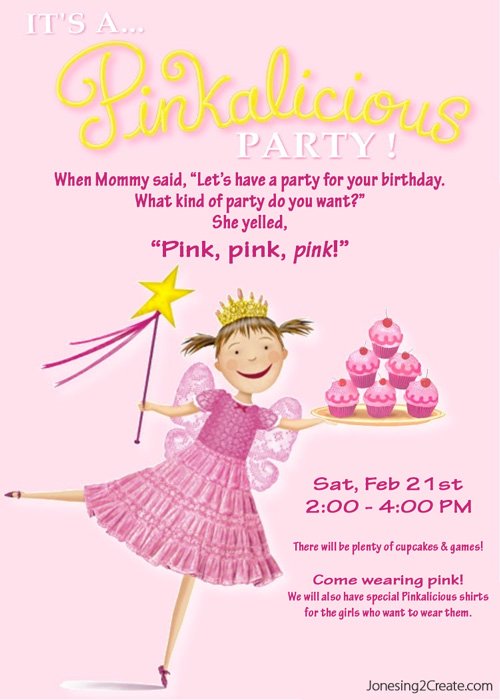 It’s not a party at our house unless there is a custom shirt. It is a my favorite party favor! 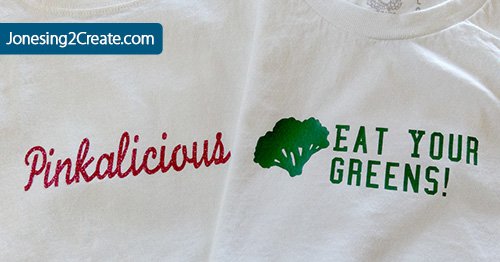 For this party I used the glitter iron-on vinyl

. I love working with this stuff because it is easier to weed and lasts longer than the regular iron-on vinyl. Plus, it looks amazing. For the two boys I made them green shirts. They had fun running around and reminding the girls to eat their veggies.

Since I have already done the hard part, I zipped up the Silhouette files for both t-shirts if you want to make your own.
Download Free Pinkalicious Silhouette File (zip)

I couldn’t resist making these super cute wands, but it took me a bit to figure out the easiest way to do them. I was going to just use foam or wood star cut outs, but had a hard time finding ones that didn’t cost a ton.

So I finally just cut them out of felt while watching Downton Abbey and glued them on these dowels I got on Amazon. Pinkalicious Princess Wand Tutorial

My plan was to do the scallops on the cupcakes like in the books, but after several tries I gave up. And in the end, I was glad I didn’t fuss over it. The girls totally didn’t care. They were ecstatic about all the pink and the cherry on top. I almost got mobbed when I brought them out. They didn’t even notice that they weren’t identical to the ones in the book. Sometimes I think we get stuck fussing over things that don’t even matter. There is no universal scoreboard that gives us extra points for making it look exactly like the ones on Pinterest. So if my kid doesn’t care and I am not having fun doing it, I have no intention of losing any sleep over it. 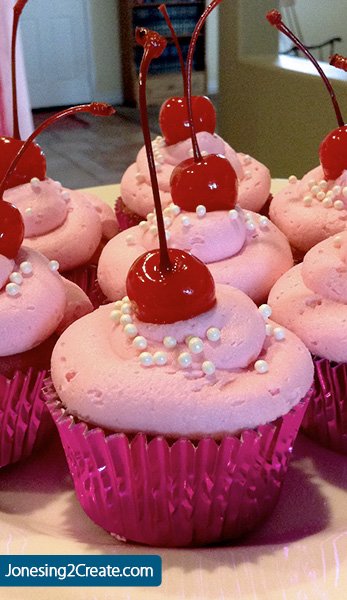 Some tips that did help:
1) I hate how cupcake liners look once you bake something in them. I bought these pink foil ones to match the cupcake wrappers in the book and they look great even after baking. They packed a lot of punch for very little effort or money.


2) Getting the right frosting tip helps a lot. I love the way they do it in the bakeries and this frosting tip gives me perfect results with very little effort, which is saying a lot because I am totally uncoordinated with frosting. 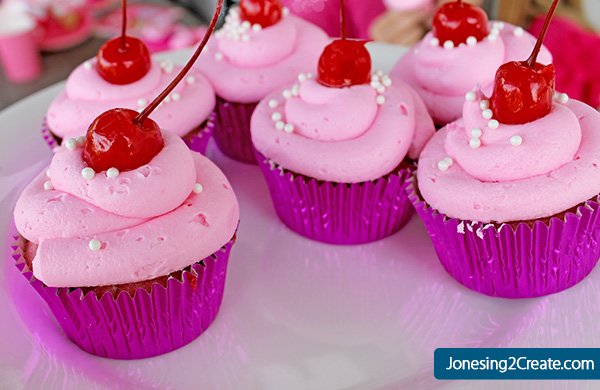 For the food, I did a pink and green theme with the pink stuff out on the table and the green stuff up on the kitchen island.

The table was spread with stuff like cotton candy, jelly beans, suckers, and wafer cookies. I made the cotton candy look like flowers by putting them in cute little muffin liners I found at the 99 Cent Store. I usually go light on the sugar stuff, but I got a little carried away with the pink candy this year. Oh well, I sent them all home just in time for their sugar crashes. 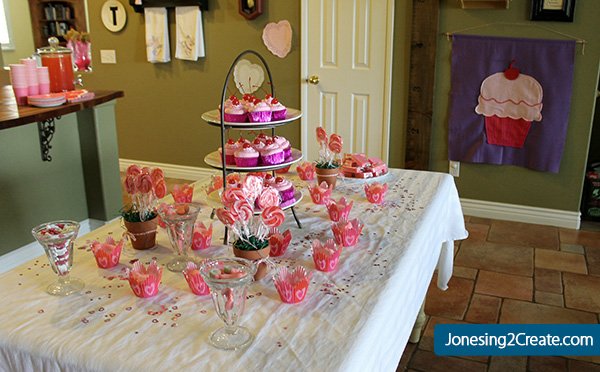 I made the lollipops look like flowers by sticking them into pots. 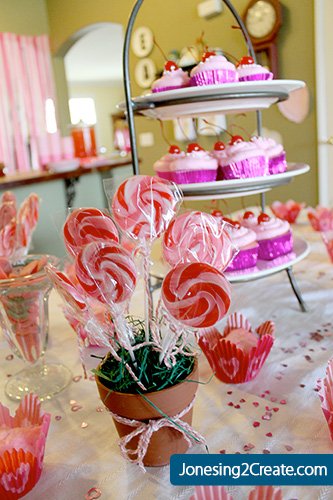 For the drink I made pink limeade using The Pioneer Woman’s recipe. I also forgot to put out water. Poor dears. They were begging for it after all that sugar. Opps! 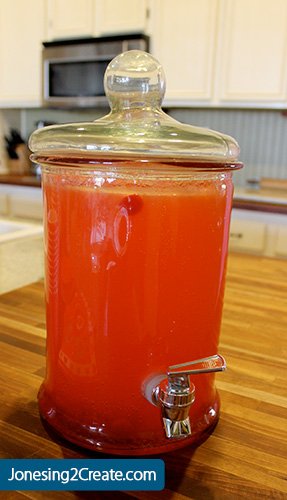 On the green table I had lots of green veggies, which G– loves (weird kid). I also made some pinwheels from spinach tortillas. 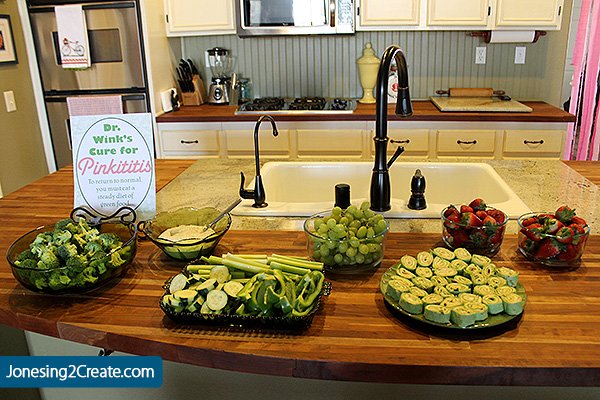 I bought those huge dill pickles, but didn’t really think any of the girls were going to touch them. Turns out they were one of the favorites and they cleaned me out. It was a riot watching all these dainty little girls go to town on them. 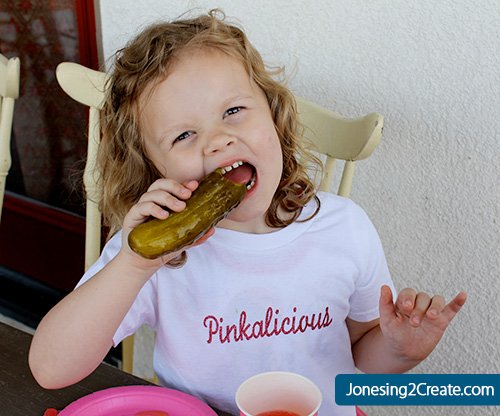 Here is the cute little sign I made for the table. 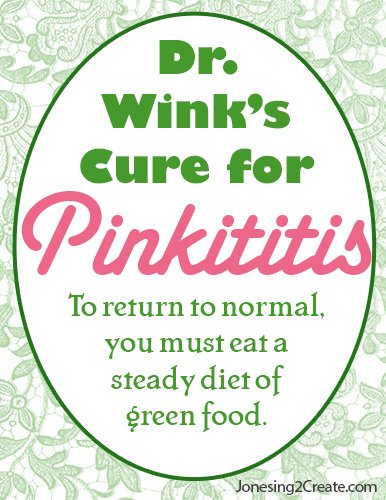 I always like to put a sign on the door so that people know to come on it. It saves me from answering the door a million times. 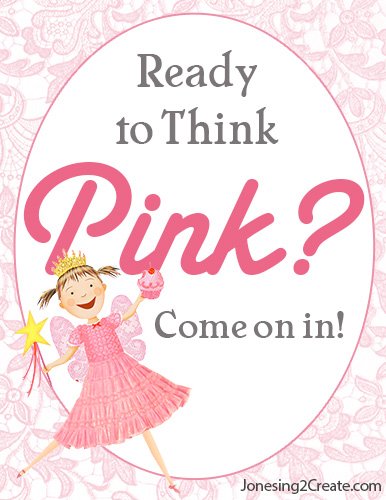 I then hung the shirts by the front door with some pink feather boas. I also stuck a little pink tiara up there that I stole from G–‘s Frozen Anna doll. It looks just like the one in the Pinkalicious book! 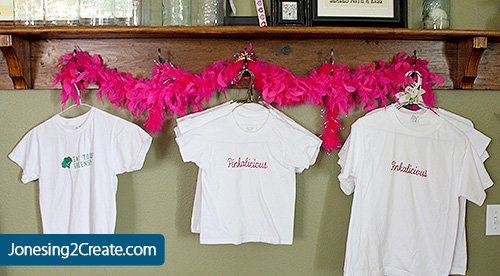 Here is the sign I made so that everybody knew to grab a shirt. 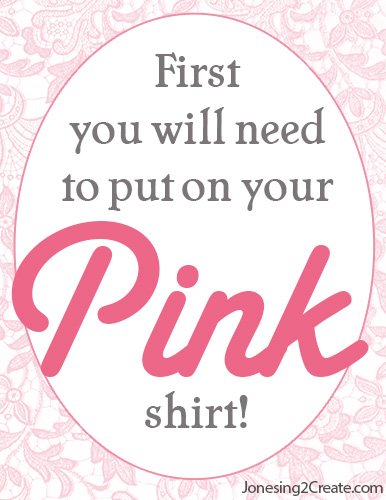 In front of our arched entry, I made a big streamer curtain by stapling streamers to a long piece of ribbon. It only took me 30 minutes to make and it packed a big punch. It made a fun grand entrance into the party and a good place to snap photos. 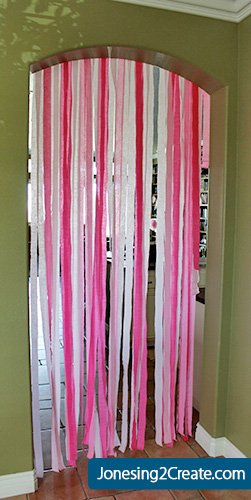 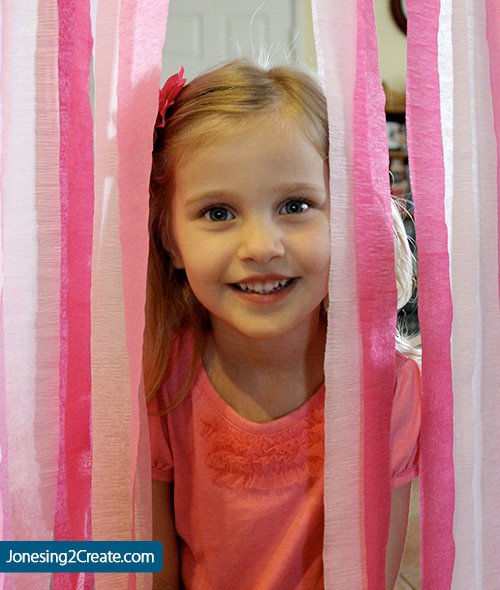 I used A LOT of doilies. They were cheap, easy, and matched the multi medium illustrations in the book. We hung them on the walls and I strung them up on pink and white baker’s twine to make garlands. To keep them from rolling up, I put a strip of packing tape along the back. It helped them keep their shape. G–‘s preschool teacher gave us the poms poms. They were perfect!

My favorite decoration were the flowers I made to match the ones in the book, but the girls weren’t super impressed by them. Bummer. Oh well, I plan on reusing them some time for a baby shower or something. I think they are adorable. And I made a Silhouette template to cut out the flowers that made them a lot easier to make. See Pinkalicious Paper Flower Tutorial 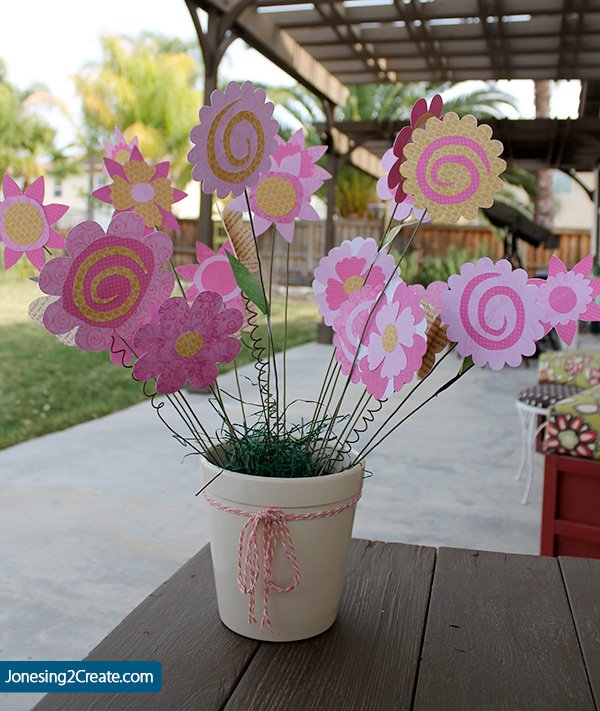 I even stuck a little Pinkalicious with G–‘s face on it in one of the flower pots. 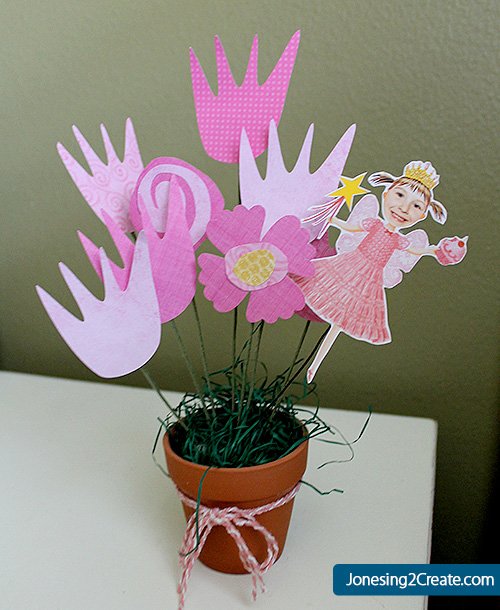 I reused a banner from G–‘s cat party. On the other side, it says, “Sweet Valentine” so that I can use it for Valentine’s Day too. I just taped some of the paper flowers on it. 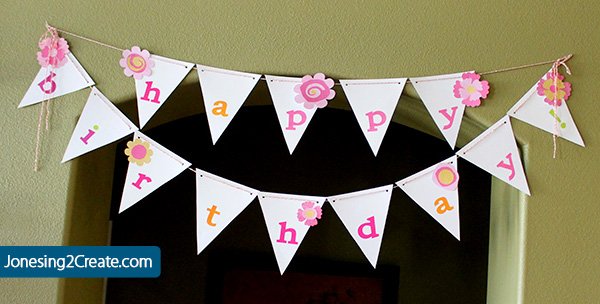 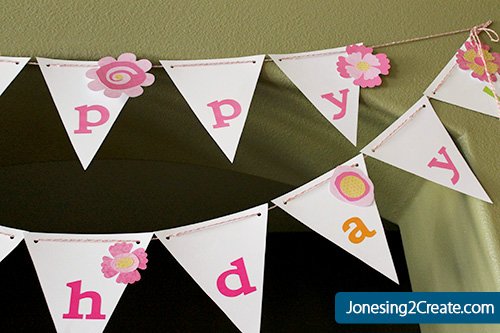 When the girls came in, I had a table set up with beads and string to make necklaces with. It was a good way to keep them busy before everybody had a chance to show up. I bought the beads at the Dollar Tree, so it was super cheap to do and the girls loved them. 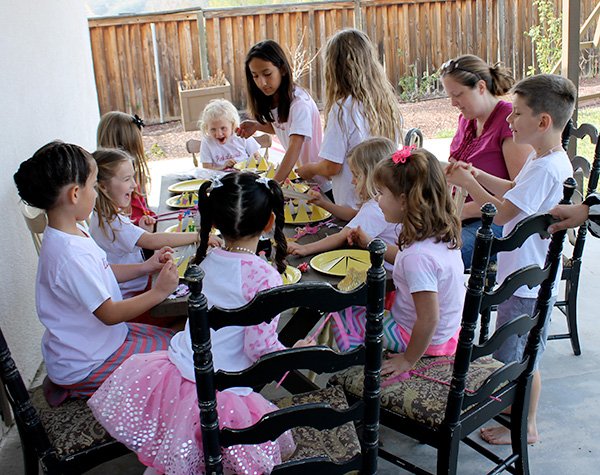 Once everybody was there, I gathered all the girls around to read the book. Even though most had already read the book, I wanted them to have some context for the party.


After reading, I handed out the wands I made and we made our tiaras. I thought it would be fun to paint all the girls’ nails pink and even had the polish all ready, but there were just too many girls at the party. I think it would work better at a smaller party.

To make the tiaras, I just used yellow paper plates I bought at Dollar Tree. I got the idea from G–‘s preschool teacher. These turned out super cute. See tutorial on paper plate crowns. 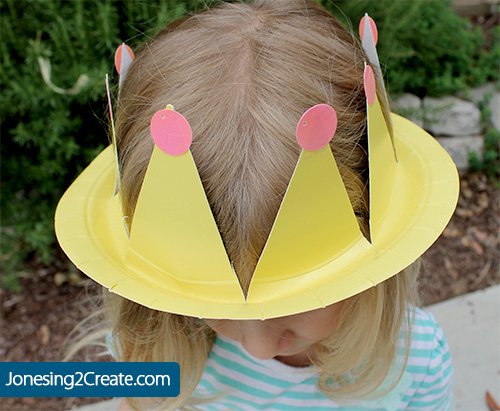 I asked some of the older girls to be my special helpers and it worked brilliantly. They were so excited to help and it was wonderful having some extra hands.

We also played “Pin the Cherry on the Cupcake.” I was going to draw it on a big piece of paper, but realized that it would take me just as long to cut it out in felt and sew it. I was able to spit this thing out in about 30 minutes and I love the way it turned out. It did double duty as a great decoration. Plus, it can now be reused over and over. 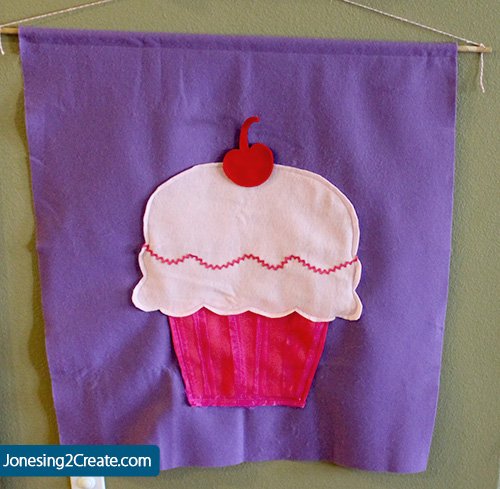 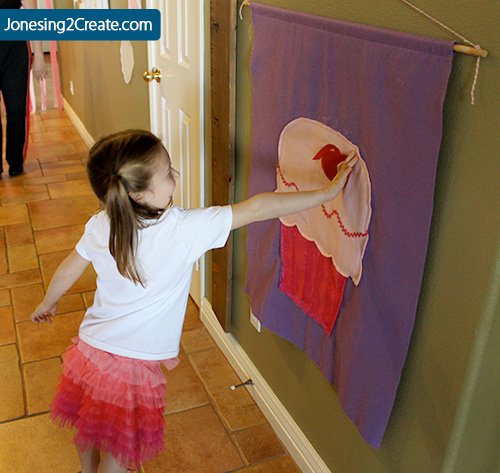 To make the cupcake wrapper, I sewed ribbon up and down in lines. I love the way it turned out! 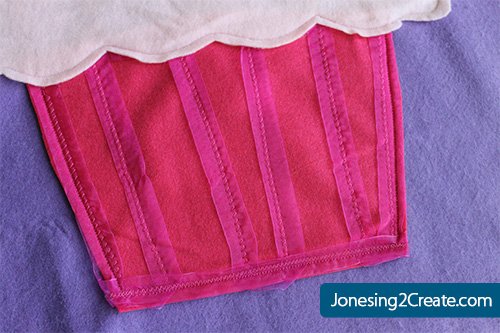 After the girls had already eaten some pink candy, I then pulled out a stethoscope and diagnosed each with Pinkitis. It was a riot watching their reactions. I told them that to be cured they had to go back and eat more greens!

Then we headed outside to do the piñata. I don’t think I have ever thrown a party that didn’t include a piñata. For this party I bought a bee like the ones that attack Pinkalicious at the park. The girls got to yell, “Buzz off, I am not a flower!” while swinging at the piñata. So cute! 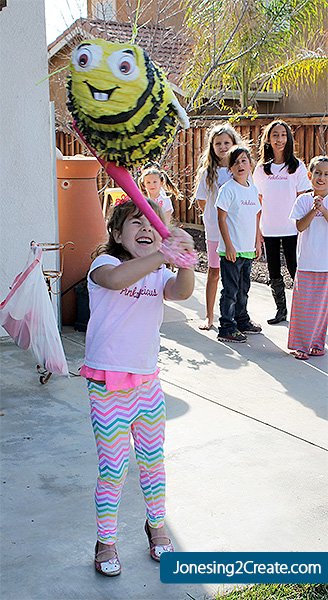 And of course it is not a party at our house until somebody sticks a piece of the piñata on their head. 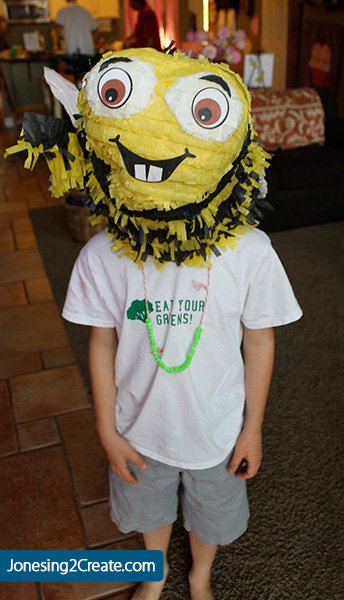