What better way to entertain a house full of boys during a birthday party than with a little bit of pod racing? This would also be amazing for Halloween. Wouldn’t it be cool to take your little Anakin trick-or-treating in his very own pod racer?

And here is Sebulba’s pod racer. I didn’t spend as much time on it as I did Anakin’s, but if we were going to race them we had to have Sebulba’s! 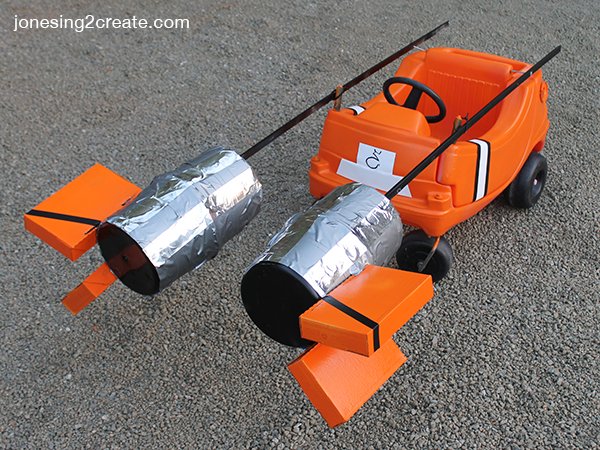 Setting it up is surprisingly easy and it is amazing what a coat of spray paint can do.

Step 1: Get the Cars
For years we have had two Little Tikes cars in our backyard that our children love, but as they have gotten bigger it was time to get rid of them. If you don’t already have some, you can also find them at garage sales for pretty cheap. It doesn’t matter if they are faded and a little worse for wear.

Here is what we started out with. 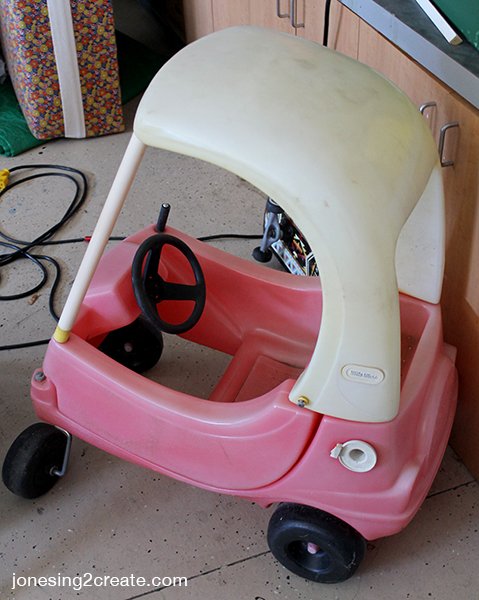 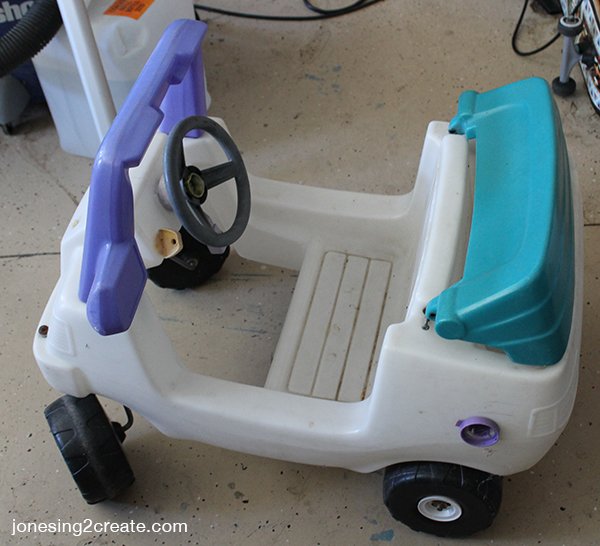 Step 2: Prep the Cars
You will want to get off any extras on the cars. For these two cars I took off the roof and the back flap. You will also want to hose them off really well and let them dry.

Step 3: Paint the Cars
The most important thing you can do is paint the cars. It makes a huge difference and is worth the $3 you spend in cheap paint. We did Anakin’s pod racer in silver and Sebulba’s  in orange. During the racing the cars get plenty of wear and tear, so I wasn’t too concerned with how good the paint job was. These really weren’t being built to last. I basically just covered the wheels with plastic bags and sprayed away. 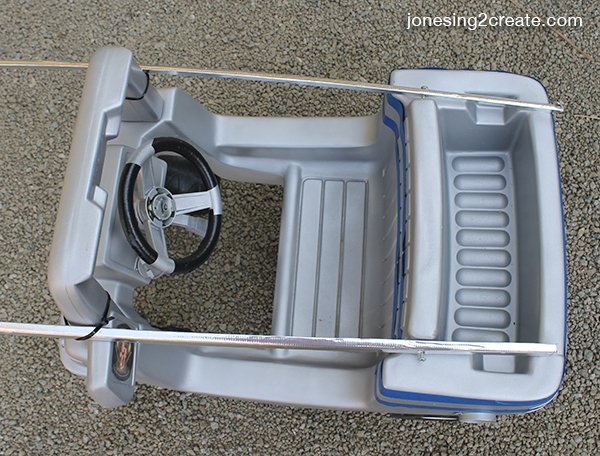 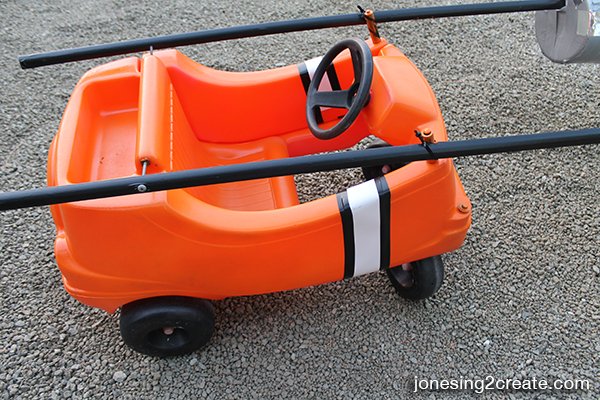 Step 4: Make the Engines
The trickiest part was getting the engines to stay on. In the movie the engines are enormous, but we had to make some design changes to get it to work. To attach the engines we used quarter-round (wood trim you can buy at any big box home improvement store), covered it with either black electrical tape or silver duct tape, and then screwed it into the holes that were once used to hold the roofs on. I then reinforced it in the front with zip ties.

For Anakin’s engines I used two #10 cans. The back cylinder was made by covering a piece of paper with metallic window tape and then rolling it into shape. It is taped inside the can just enough to hold it inside.

The yellow fins are construction paper covered with packing tape to help it maintain its shape. I love using packing tape as a quick and dirty way to laminate stuff. I also cut out the symbols on blue paper and glued them on the paper before I laminated it. Then I taped on some yellow straws to add more support. The fins are taped on with silver duct tape.

I then printed out a starburst pattern for the inside engine design and painted some Dole fruit cups yellow for the middle part. 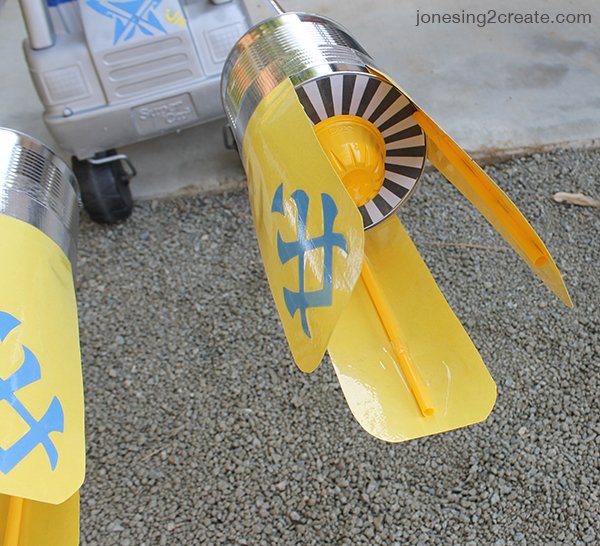 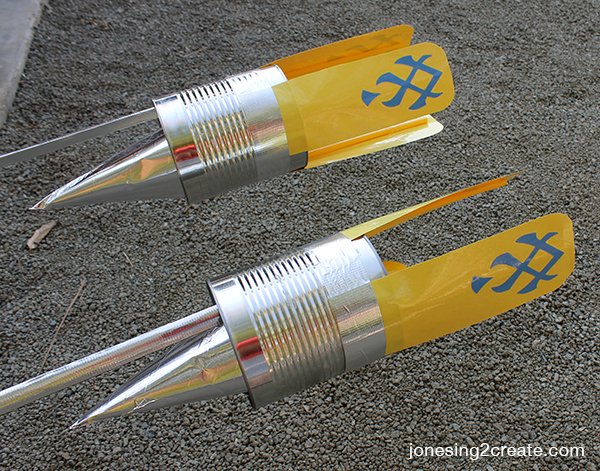 Sebulba’s was trickier and I didn’t spend as much time on it. His engines are basically two ice cream buckets taped together. I then spray painted four boxes orange and strung them on yarn and tied them around the buckets, positioning the boxes so they looked like Sebulba’s fins. 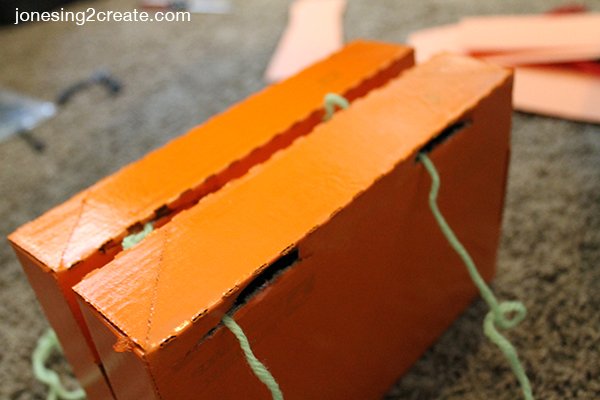 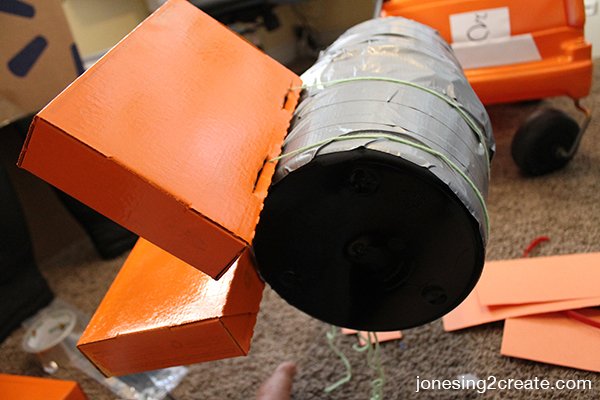 I then covered the whole thing in duct tape to make it look silver and to hold the yarn from the boxes in place. I went through a lot of duct tape prepping for this party! The front of the engine was spray painted black.

Step 5: Finish the Details
For Anakin’s pod racer I used my Silhouette to cut out the decal he has on the front and I used mod podge to glue it on. 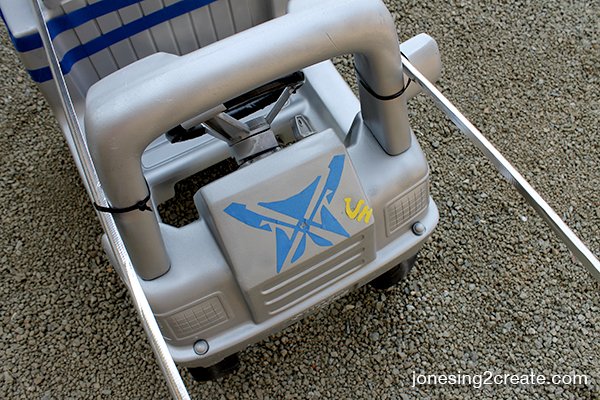 I did the back stripes just using electrical tape, but if you used blue duct tape it would stay on better. I just didn’t feel like buying more duct tape! I then covered the steering wheel with electrical tape. 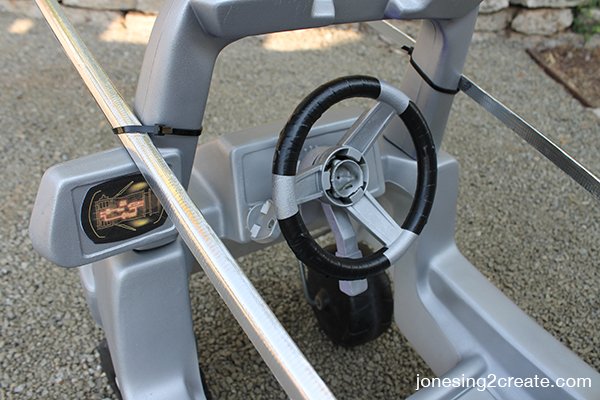 The finishing touch was the control panel. I was able to find Anakin’s control panel online, so I printed it out and taped it on the rear view mirror. 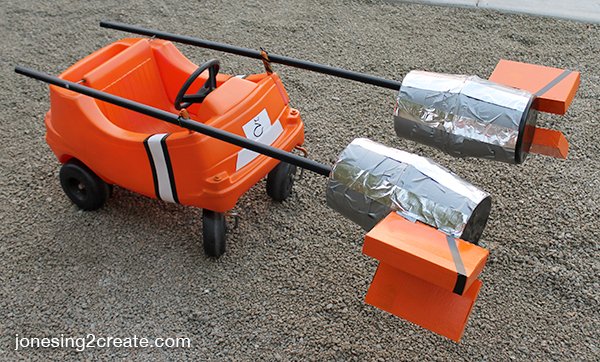 Step 6: Race Them!
My hubby recorded the sound from the pod racers in the movie and then put it on his iPod. While they raced, he stuck the iPod in the back of the car and played the recording while he pushed it around. It was awesome!

He and my brother-in-law raced the kids around a simple course in the backyard. They really got those boys moving fast and it was quite a work out! 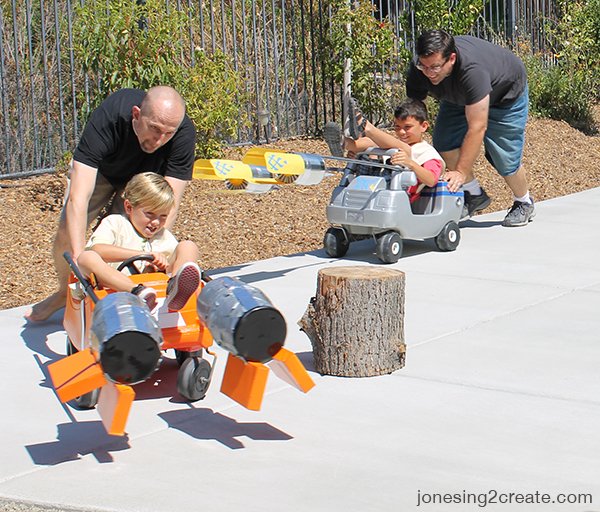 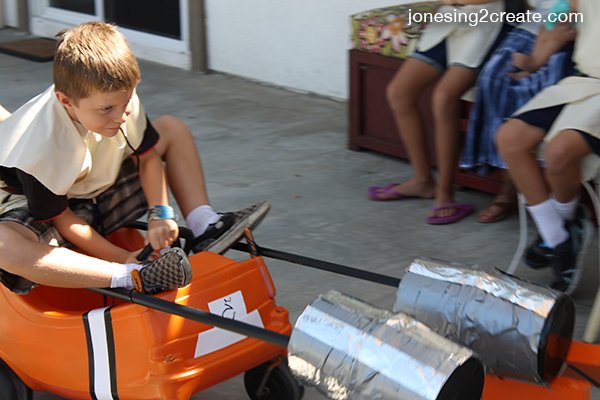 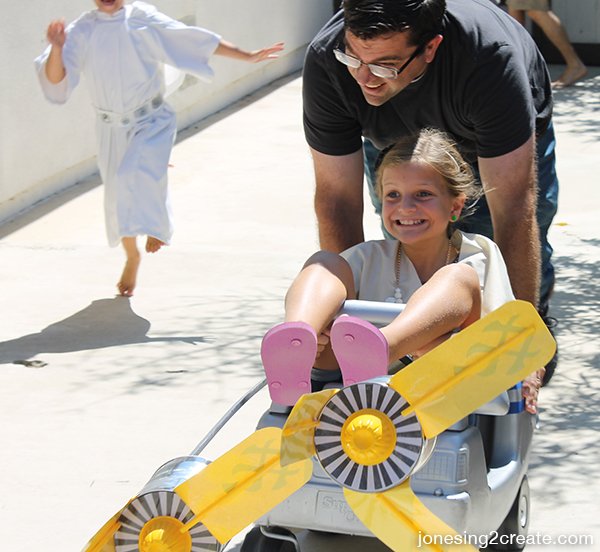 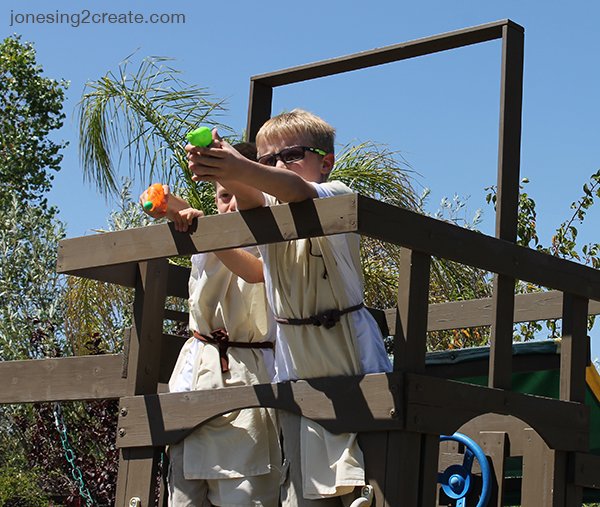