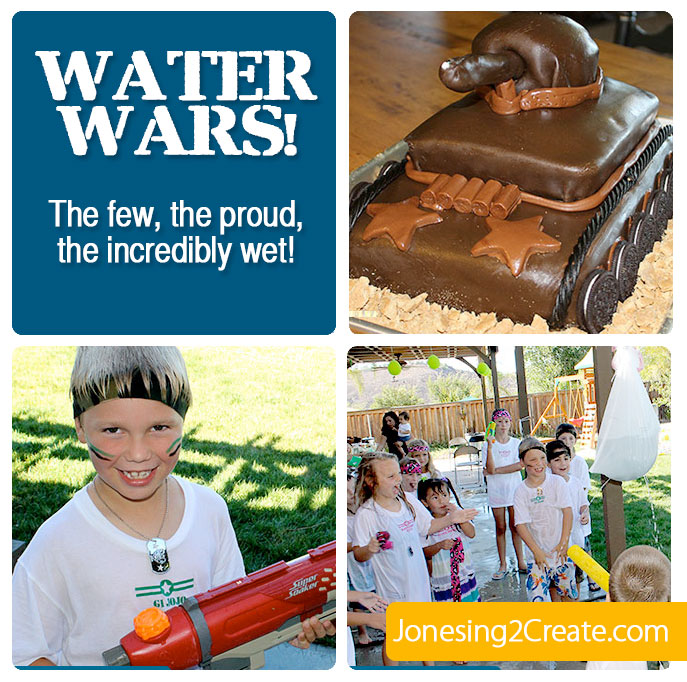 My son’s birthday is in the middle of the burning hot summer. Not looking forward to fitting 30 kids into my house, I wanted to try to have it outside. But I knew that if I was going to host it outside that I would need to make sure water was involved somehow—lots and lots of water.

and she wanted to set them all up some time all over the yard and have a party for her son. I thought it was brilliant. She ended up throwing her son’s party at a bounce house gym, so I stole her idea!

I wanted to have a theme though, so I decided to make it “Water Wars” with an army theme. I had a blast planning it and had to be very, very careful not to let myself get too carried away. But luckily most of the games were super easy and required almost no time to prepare for.

I designed these especially for the party. I also used the same template to make ammo jugs of water for the kids to refill their water guns with. 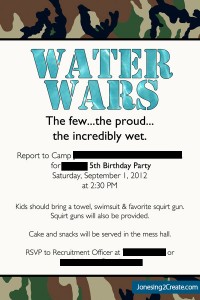 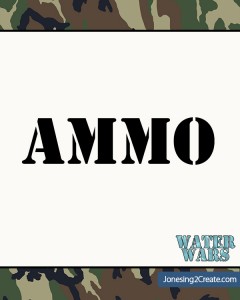 My main focus wasn’t on the decorations because I figured that the kids wouldn’t care, but on the kids having a great time. So I focused a lot on the games. The idea of most of the games was that the kids had to rescue POWs (aka little army men). We also set up our two pools (with one at the bottom of our slide), a crazy sprinkler, and a water table for the little ones. 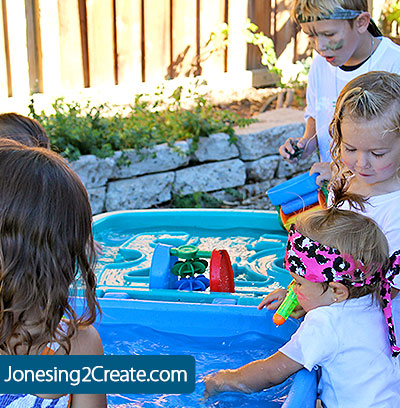 To be honest, most of the games quickly broke down to water fights, which is what the kids had the most fun doing anyway, so it worked out just fine. We had our babysitter come to help run the games. It was a huge help. I could then just focus on the guests and food.

I filled up a trash bag with water and army men and hung it up from the patio with a rope. I figured that it would just pop all at once when the kids beat it with the bat. But instead it got holes in it and started to spray everywhere, which was pretty cool too. Before it drained completely, I had one of the older boys finish it off real fast. The water gushed out and the kids all rushed in to rescue the army men. It was so much more fun than the typical piñata candy! 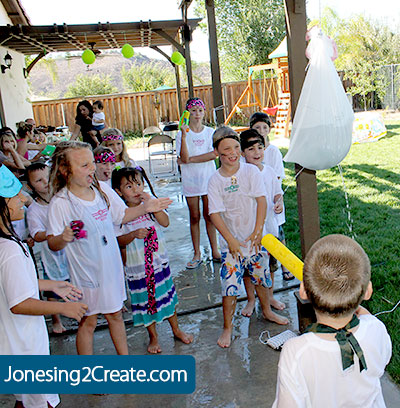 I froze army guys in water the night before and then the kids had to melt the ice using their squirt guns. It was slow going, so most of them ended up taking them into the pools to get the army men out. Smart little stinkers. One boy even tried biting his out! 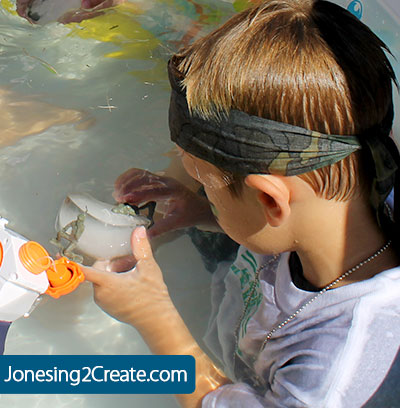 The kids had to fill a bucket of water by scooping up water out of another bucket using a cup. The cup had holes punched in it and they had to hold the cup above their heads and then dump whatever was left in the bucket. The kids really liked this one. 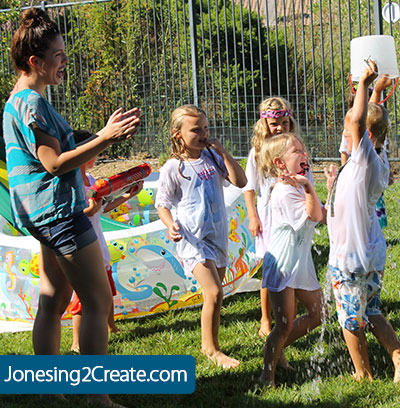 This game is played the same way that Duck, Duck, Goose is played. But instead of yelling “Duck!” you yell “Splash!” and wring out the sponge on the person’s head. The sponges later became very popular during water fights.

I hung a rope with a plastic watering can between two posts. The kids each got water guns that they used to try to spray the bucket to the other side. If you got it to the other team’s side, you won! 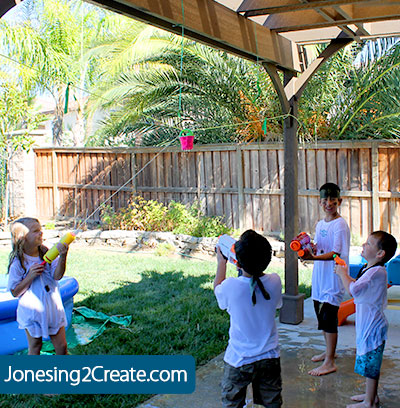 We of course also did a water balloon toss (which also broke down to a water fight) and I had bull’s-eye targets for all the kids to shoot all over the yard. 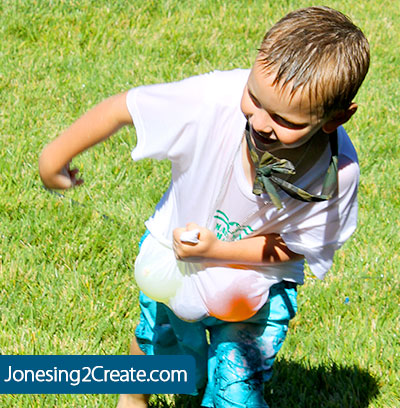 The place I spent the most time on was the goody bags. I made each of the kids a camo headband (with pink for the girls), dog tags, and personalized shirts. Each kid had their own “battle” nickname that I put on their shirt. In all honesty, I did the shirts and headbands just so that I could see the babies in them. They were so stinking cute! 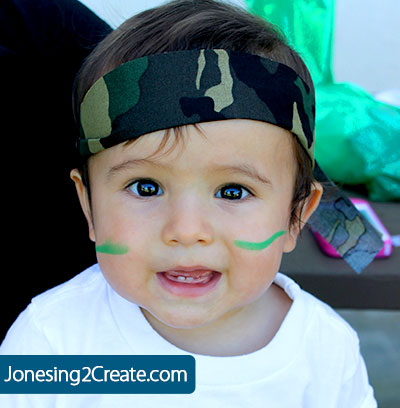 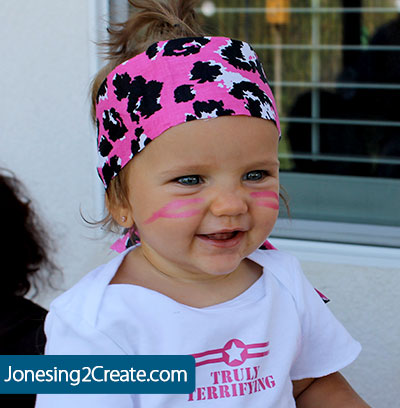 The t-shirts were super cheap to make. I just bought packages of Hanes t-shirts at Walmart. The shirts only cost about $1.50 each. I then used my Silhouette to cut the design out of iron-on vinyl. It is super easy to just iron it on.

Some of my favorite names were:
“Cole”-ision
GI JoJo
Allie’gator
Mad Man Mason

I was able to get the dog tags online and then put each kid’s first initial on them with vinyl.

Last minute I grabbed some face paint and was so glad that I did. The kids looked awesome. I also put a squirt gun and some candy in the bags. 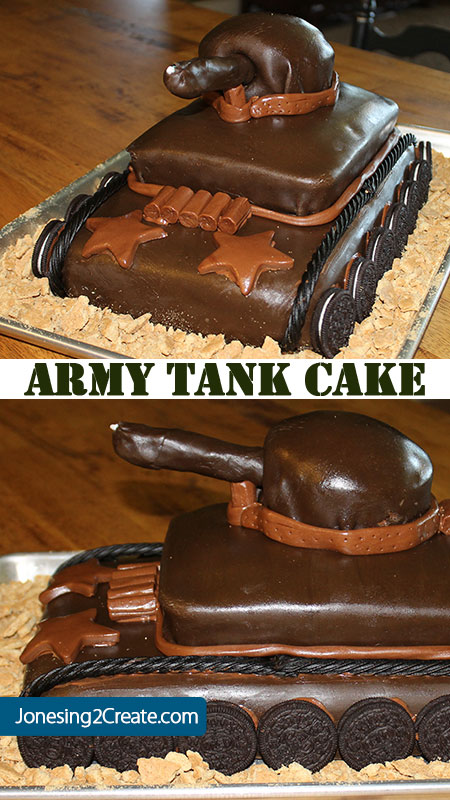 I wanted to do a army tank cake and was just going to use regular frosting, but I am not great with frosting. And the coolest tank cakes I had seen online were made of fondant. I had found a recipe for a marshmallow fondant that looked pretty easy, so last minute I decided to give it a try. I was so naïve, so very, very naïve.

I was about three hours away from the party and quickly realizing that I had no idea what I was doing. So I looked online for some guidance. My heart fell when I started to read about women who had started practicing three weeks ahead of time to make their kid’s cake and about the hours they spent over multiple days working on it. I had gotten in over my head. But I figured that I could always get a cake from the grocery store if things got too ugly and I plugged ahead.

Luckily it turned out pretty well and it was a huge hit with the kids. I just used a chocolate fondant with tootsie rolls as the accent. I discovered that if you put tootsie rolls in the microwave for just five seconds they become a wonderful, edible modeling clay. I used cookie cutters to cut out the stars. For the fondant I just substituted a little of the powder sugar for cocoa powder in the recipe.

For the bottom I used a 9×13 cake and the top rectangle was baked in a smaller casserole dish. The very top was cooked in a bowl. I ended up using two boxes of cake mix.

My favorite was the cannon. I used a large pretzel and tied a candle to the tip with dental floss. I then wrapped the whole thing in fondant. So when son blew out his candle, he got to blow out the cannon. He totally loved it! After all that work, it about broke my heart when I had to cut it up into pieces.

The only decorations I did was some balloons, some army banners I bought at Party City, and some camo plastic tablecloths. See, I told you that I almost totally ignored decorations.


One of the best things was looking back at the photos and seeing how much fun the kids were having. I have had several parents tell me that their kids have said this was the best party they have ever been to and that they can’t stop talking about it. I really think it was because I focused my time on the things that I knew the kids would love and almost no time on the kind of elaborate decorations you find on Pinterest.

Later one of the moms told me that her son insisted on wearing his camo headband for days afterwards. That means more to me than getting “pinned” any day! What more can you ask for? We all had a blast!