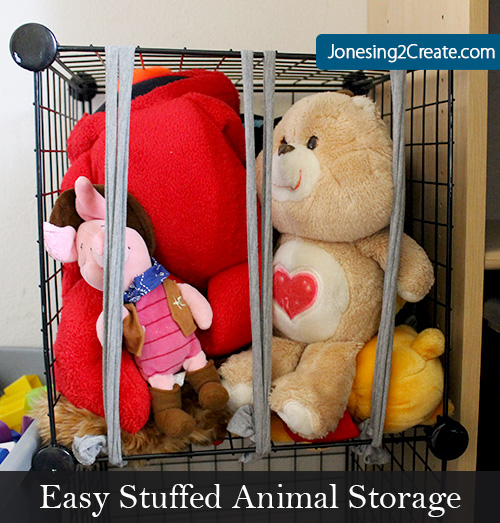 I used to love stuffed animals when I was little. I kept my beloved collection lined up on my bed. I remember before we had kids I talked to this mom who said that stuffed animals were not allowed in her house. I was shocked. I could not believe a mother could have such a cold, dead heart.

But then I had kids and the stuffed animals started to pour in, literally pour in, and I totally understood. Not only is figuring out an easy solution to stuffed animal storage a nightmare, but you also can’t help but wonder if it is even worth it.

First of all when you have kids just about everybody you know will buy them a stuffed animal. This adds up, fast. If you are not careful the stuffed animals will take over the closet and will then come spilling out the door. Chances are you will also pick up some from vacations and they will become priceless souvenirs to your kids.

Second, stuffed animals are cute and all, but for most kids there are not worth the play-to-space ratio. They take up a crazy amount of space and my kids hardly touch them. We have some stuffed animals that have never been played with more than a couple of times.

When my kids do play with them, the game goes something like this:
1) Take all the stuffed animals out of their room.
2) Pile them in the middle of your living room floor.
3) Walk away.
4) Howl about how there are too many to clean up when you ask them to put them away.

About five minutes of the game is spent piling up the stuffed animals, the next three hours is spent whining about having to clean them up.

Third, they are hard to get rid of undetected. Stuffed animals are big and obvious. If you chuck one when you kid is not watching, your kid will notice. Your kid will care even though she hasn’t touched the thing in six months. She will act like you are asking her to cut off her arm. E.V.E.R.Y. S.I.N.G.L.E one of them is priceless and sentimental.

Fourth, B– has asthma and allergies. Stuffed animals are a nightmare. We have had to limit him to only three beloved stuffed animals. One is Stanley Stegosaurus, a stuffed animal my husband owned when he was little. He is cute and sentimental and he makes me smile. See, I am not totally hardhearted.

With the exception of their one or two prized favorites, most of the others are a waste of space and an organizational nightmare.

So the other day when I decided to tackle G–‘s room I knew that the stuffed animals would be my biggest problem. I had tried designating a shelf in the closet for them, but they kept falling out. I saw those cute little bean bags that you can fill stuffed animals with, but I had already made another kind of bean bag for G– and wasn’t about to make her another. And there wouldn’t be any space for it in her room if I did. Plus I worried that she would always be pulling the stuffed animals out and I would always be stuck putting them in. Zippers, small holes, and preschoolers don’t always mesh well.

After a lot of thinking, I finally figured it out. My husband has owned these wire storage cubes since he was in college. The things are almost 20 years old and still kicking. We have used them for everything from shoes to food storage. They are made to come apart and be reconfigured so they are super versatile.


So I set up two cubes in G–‘s closet and cut an old t-shirt into strips. I then tied the t-shirt fabric between the wire mesh. The t-shirt is stretchy enough to make it easy for G– to put the stuffed animals in, but strong enough to keep them from falling out. The best part is that I didn’t have to build anything, it cost me nothing, and it took 10 minutes to set up.

G– loves it. She calls it her stuffed animal zoo. She can easily get to them when she wants to, and it is easy for her to put them away.

This would also work great for storing things like rags or balls in the garage.