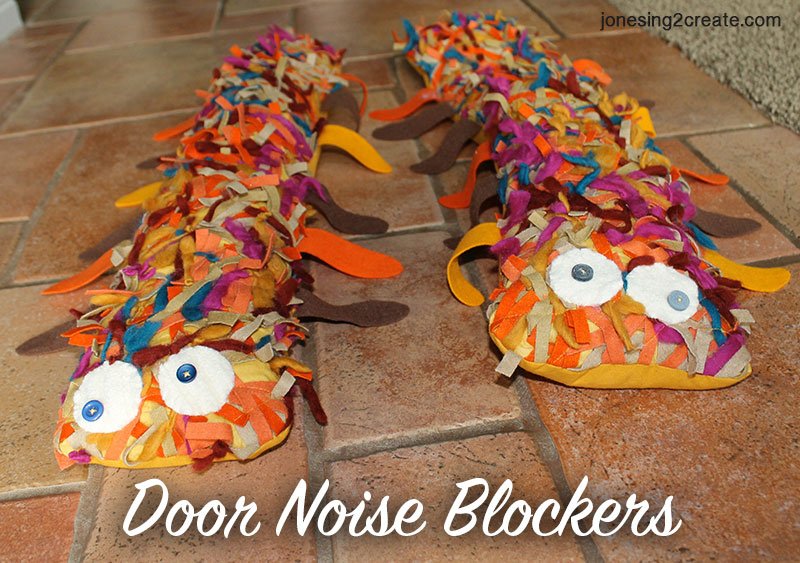 Most of our house is tile, which I love. Especially if your little one decides to throw up in the hall on the way to the toilet and not in the actual toilet. But tile does have its downsides. For example, any noise in the house echos right under all the doors. When my kids were babies, this was a nightmare. Especially since my oldest is a noise machine. I desperately needed a door noise blocker to help muffle the sound.

Long ago I bought some crazy pillows at a Pier One discount store. They were called confetti pillows and had felt sewn all over them. Not surprisingly, they hadn’t sold well and they were clearing them out for about 75 cents each. The fabric really looked just like this. I did nothing to it. It was crazy. They were hideous pillows. But I was no dummy, the stuffing in those babies was worth way more than 75 cents, so I grabbed a bunch and figured I could just throw away the fabric.

But then I realized that the fabric would make the cutest caterpillars and I set to work on making them into a door noise blocker or door draft guard. I just cut them into long rectangles, added some felt legs, and sewed them together. To help them stay put better, I added stuffing and some rice. You could also use poly pellets. For the eyes, I used some felted sweater scraps and buttons.

When the kids are asleep, I just push them up against the door and it blocks out a lot of the sound. My sweet husband will sometimes put one at the foot of our bedroom door on Saturday mornings so I can sleep in without hearing the kids running around the house. When the kids were little, they would often pretend to ride a caterpillar door noise blocker around the house.

So far these cute little guys have lasted us six years and I still use them under my kids’ doors. We have a one-story, very open concept house, so it is nice to have something to block out the noise of the TV when my husband and I are watching it at night.