December 2021 Christmas Ministering Message – Do the Gifts of the Wise Men Point to the Garden of Eden? 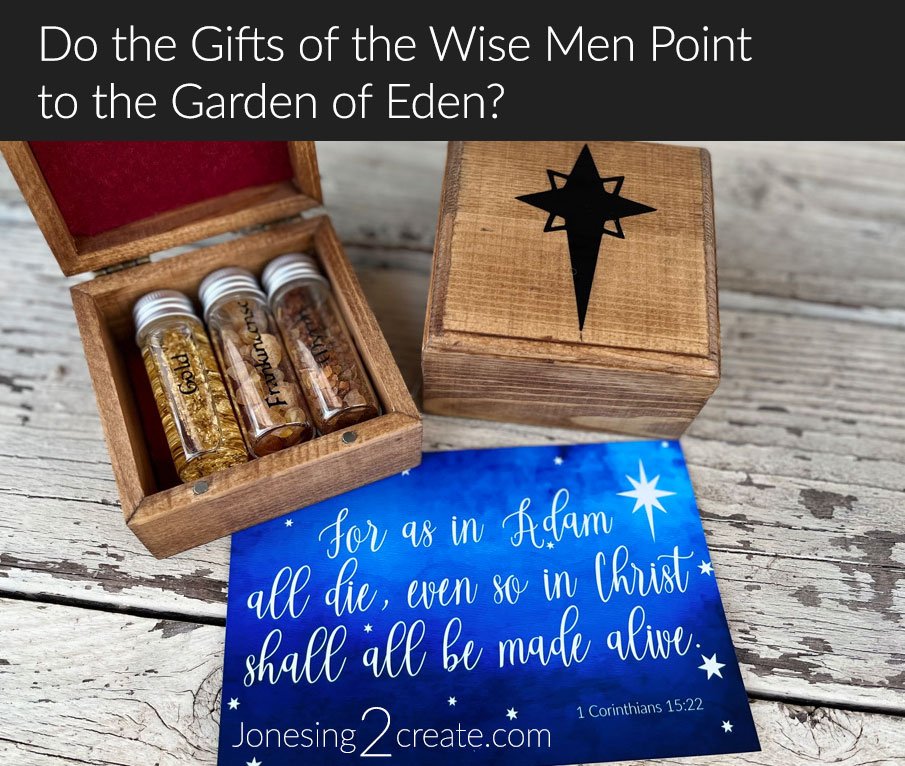 Every year, I set a goal to look at Christmas in an entirely new way. Celebrating Christmas is kind of like driving home. The way is so familiar that you hardly even think about it. Sometimes you arrive at your house and realize you don’t even remember driving there. After over 40 Christmases, sometimes the season can feel a little like a familiar drive home. Comforting, but a blur. It is too bad because there is so much to learn and notice. And if we are on autopilot, we will miss it. So I challenge myself to notice something new every year. It helps me feel the spirit and centers my holiday on Christ.

This year, my husband sent me an article about Adam and Eve and the Wise Men written by Jeffery M. Bradshaw. There is so much good stuff in the article. The hardest part about writing this year’s Christmas ministering message was trying not to stuff everything in there. So I am including this article and my other sources down below. That way if you want to dig deeper, you can.

I am also going to include below a tie-in to “Come, Follow Me” and the October 2021 General Conference that you can use if you want to cover this message in conjunction with either of them. You can also find this printable and a wonderful ministering gift idea at the end of the post.

Do the Gifts of the Wise Men Point to the Garden of Eden?

On Christmas Eve, our family gathers together with grandparents, aunts, uncles, and cousins to reenact the nativity. When the Wise Men come to worship the Christ child, they bring a box full of real gold, frankincense and myrrh.

Our children love smelling the frankincense and myrrh. But the star of the show is a glass snow globe full of thinly pounded flakes of gold. The flakes are magnified by the water and the shape of the globe, so it looks like a lot. Our children are convinced it must cost a fortune.

In the morning, we will be busy opening presents. But in this moment we focus on Christ. We talk about the gifts He received and what it means to give gifts at Christmas.

Gifts From the Garden of Eden to Adam and Eve

Although the Bible doesn’t explicitly say, there are many traditions about why the Wise Men brought gold, frankincense, and myrrh. In early Christian texts, there are even stories that reference all the way back to Adam and Eve. According to these accounts, Adam asks for something from the Garden of Eden to comfort him and Eve in their new, fallen state. In response, the Lord gives them gold, frankincense, and myrrh.

God sends an angel to retrieve golden rods from the Indian Sea. The rods “shine forth with light in the night around [Adam], and put an end to his fear of the darkness.” God also sends angels to collect frankincense and myrrh from the Garden of Eden.

The gifts not only point back to what Adam and Eve left in the Garden of Eden, but forward to God’s ultimate gift of His Son. They point to the time when Christ would save mankind from their fallen state.

Jeffery M. Bradshaw explains some of the broader symbolism of these gifts, “In Old Testament times, gold was the symbol of kingship, frankincense the offering of priests, and the oil of myrrh—“known as the ‘dew of resurrection’—had anointed the royal high priests after the order of Melchizedek and transformed them into sons of God.”

According to Margaret Barker, the Garden of Eden was the original temple; and gold, frankincense, and myrrh were symbols of that temple. At His birth, Jesus receives the same temple-significant gifts Adam received. Barker points out that,  “Jesus was the new Adam, the new creation, opening the way back to Eden and restoring the true temple.”

Especially significant is the myrrh oil. Barker says, “The myrrh oil, kept in the holy of holies for anointing kings and high priests, had been hidden away in the time of Josiah, during the great changes in the temple. This too had to be restored for there to be an anointed one, a Messiah. No high priest of the second temple was anointed; the description of Joshua being made high priest in the second temple mentions only his vestments, but not his anointing (Zech. 3.1-5). Jesus, however, said he was fulfilling the words of Isaiah 61: ‘The Spirit of the LORD God is upon me, because he has anointed me . . .’ (Luke 4:21, quoting Isa. 61.1), and at his birth he was declared to be ‘Christ the LORD’, ‘the Anointed One’ (Luke 2:11).”

John W. Welsh explains that, “By giving Jesus these three essential, holy and precious gifts, the wise men prepared Jesus, ‘the last Adam’ (1 Corinthians 15:45), to offer the ultimate sacrifice as the new and everlasting high priest, bringing eternal light, life and God’s presence from heaven above to earth below.”

A Promise of Paradise

According to Bradshaw, “The three gifts of the Magi symbolized God’s promise of an eventual recovery of what mankind had lost when they were first shut out from Paradise, — including the restoration by Christ of the higher priesthood and its distinctive ordinances.”

In these early Christian texts, the gifts of the Magi were not just expensive gifts that symbolized the importance and divinity of Christ. They are also tokens of a promise made to Adam and Eve to restore them, and all mankind, to Paradise and the presence of the Lord.

As Jacob teaches us, “Adam fell that men might be; and men are, that they might have joy. And the Messiah cometh in the fulness of time, that he may redeem the children of men from the fall.” (2 Nephi 2:25-26) Or as Paul reminds us that “For as in Adam all die, even so in Christ shall all be made alive.” (1 Corinthians 15:22)

This Christmas, may the gifts of the Magi also be a comfort to us as we find joy and faith in the promises made since the beginning of time.

I loved the below quote from President Nelson. This month’s Christmas message is an excellent example of temple imagery in the scriptures and in our traditions.

“Temple ordinances and covenants are ancient. The Lord instructed Adam and Eve to pray, make covenants, and offer sacrifices. Indeed, “whenever the Lord has had a people on the earth who will obey His word, they have been commanded to build temples.” The standard works are replete with references to temple teachings, clothing, language, and more. Everything we believe and every promise God has made to His covenant people come together in the temple. In every age, the temple has underscored the precious truth that those who make covenants with God and keep them are children of the covenant.

Thus, in the house of the Lord, we can make the same covenants with God that Abraham, Isaac, and Jacob made. And we can receive the same blessings!”
“The Temple and Your Spiritual Foundation,” by President Russell M. Nelson

I love the verses in Doctrine and Covenants 138:12-19 that describe the joy of those “awaiting the advent of the Son of God.”

Namely: “They were assembled awaiting the advent of the Son of God into the spirit world, to declare their redemption from the bands of death. Their sleeping dust was to be restored unto its perfect frame, bone to his bone, and the sinews and the flesh upon them, the spirit and the body to be united never again to be divided, that they might receive a fulness of joy.”

In the December 20–26 Christmas – The Matchless Gift of God’s Divine Son section there are two subsections that fit in really well with this message. 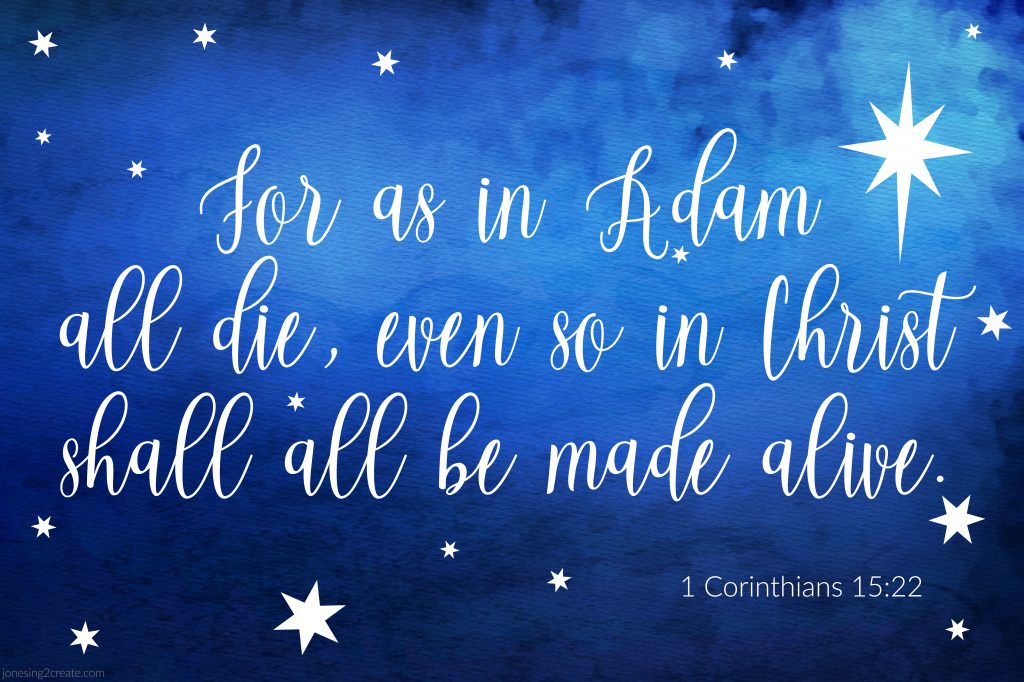 You can print these printables as 4×6 photo prints. My local drug store prints them for just pennies. It is a high-resolution print so you can enlarge it as well. 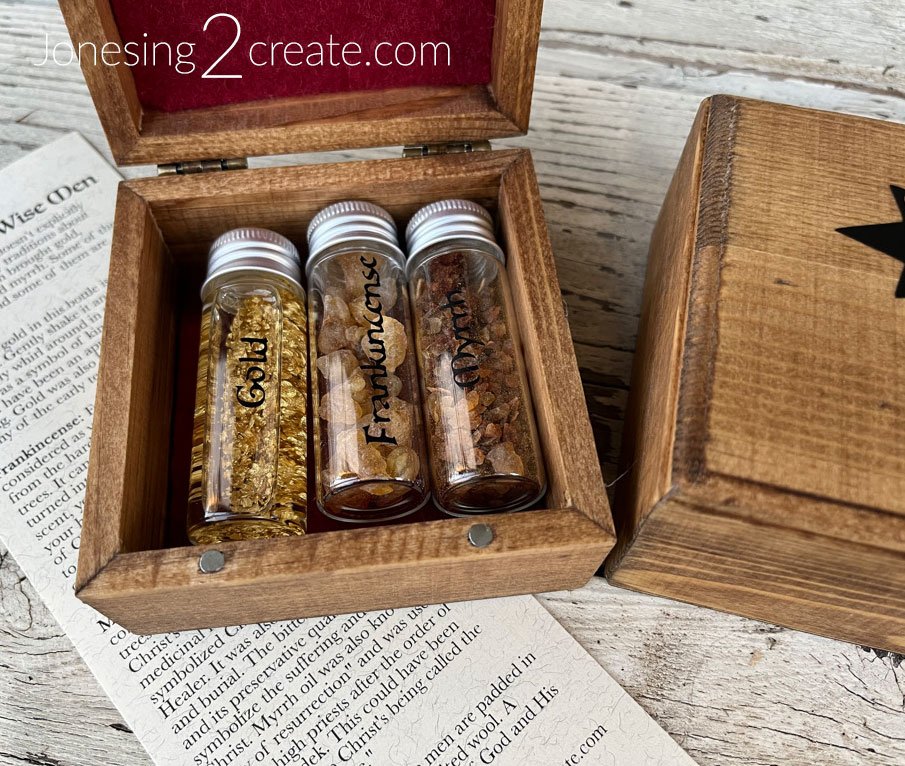 I love our Christmas tradition of bringing out the gifts from the Wise Men for our kids to examine. So I decided to make our own little gold, frankincense, and myrrh box set to share. They are pretty easy to do and fairly inexpensive. I have included a full tutorial on my post:
“Gifts of the Wise Men DIY Props: Real Gold, Frankincense, and Myrrh“ 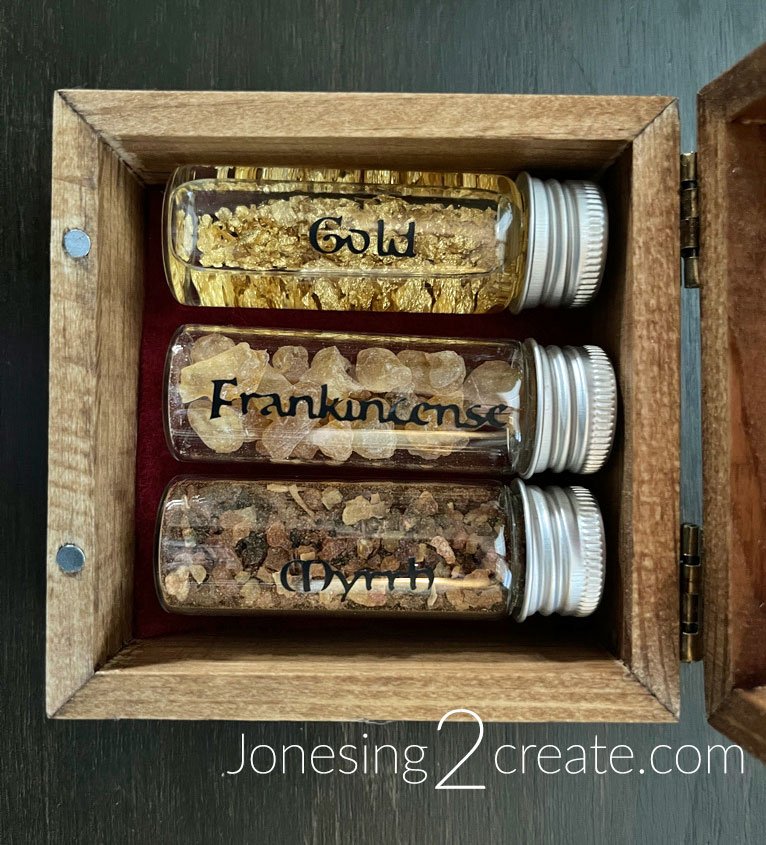 Did you like this December 2021 Christmas Ministering message? Find more Relief Society Ministering Printables for the Church of Jesus Christ of Latter-day Saints.