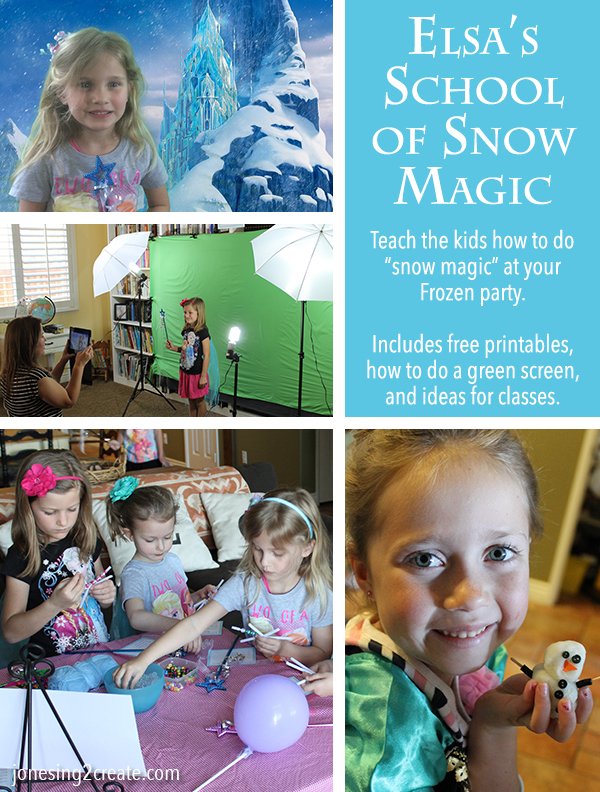 There have been so many Frozen birthday parties, that I wanted to do something a little different. A couple of years ago we did a Harry Potter birthday party for my son and we organized all the activities into classes. Splitting everybody up into smaller groups allowed the kids to really focus on the different activities without all the crowding and chaos. Kids were also able to stay longer in classes that they liked best.

Since girls LOVE to play school, I decided to use a similar format by creating an “Elsa’s School of Snow Magic” where the girls could learn different types of “snow magic.”

When the girls arrived at the house, we had everything set up for “class registration.” Each of the girls received her school uniform (t-shirt, wand, and cape) and a report card. 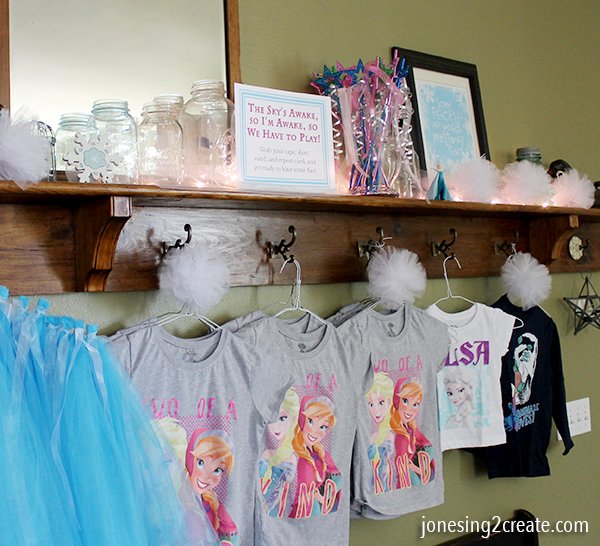 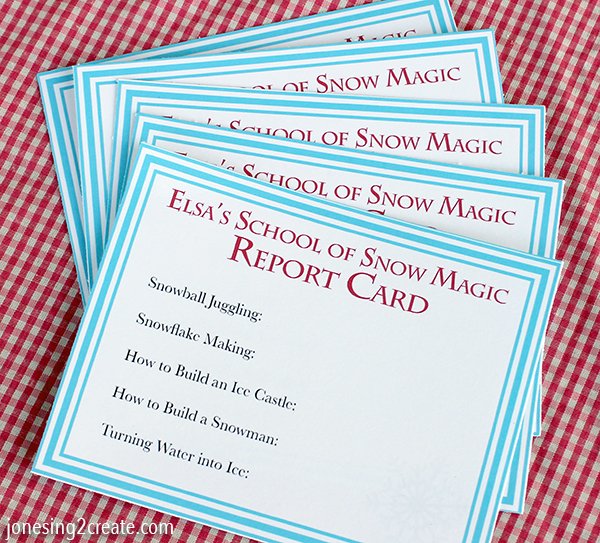 I had a green screen set up in the front room and before joining the party, I took photos of each of the girls. Green screens are really easy and cheap to do, and they pack a lot of punch. Later I use the photos as thank you cards and it is a fun memento of the day. I have noticed that kids can get a little camera shy, but I have found that sticking two of them in the photo or video together helps them loosen up a bit. 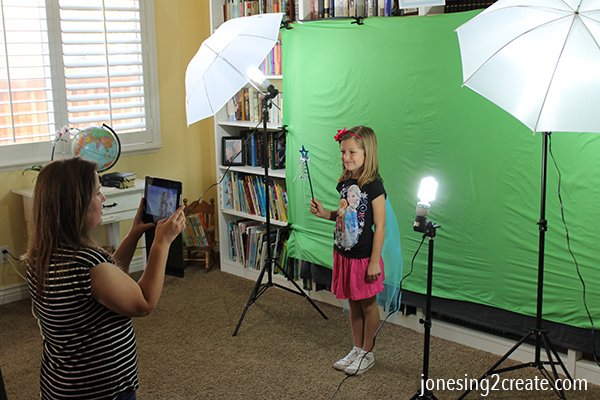 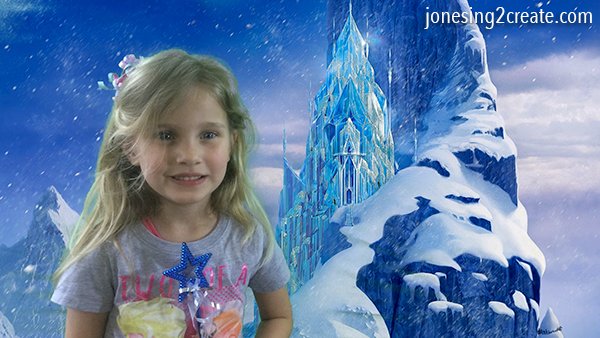 I then used the photos to make thank you cards and we mailed them to all the girls. They were a huge hit. A lot of the girls carried the photos around with them for days. So cute! 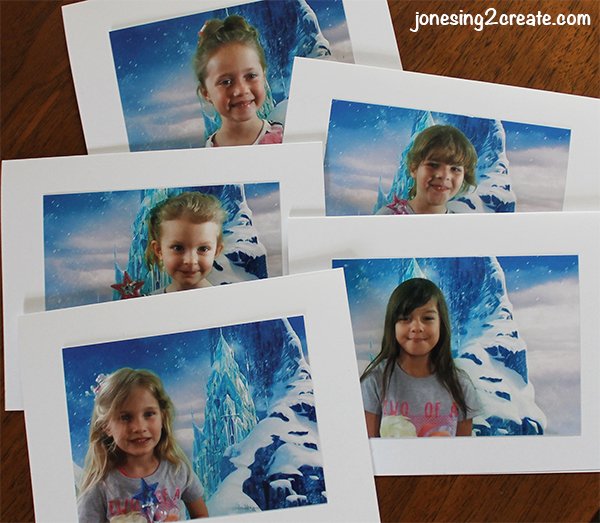 Once they had their uniform, class photo, and report card, I sent them off to report to their classes to learn how to do different kinds of “snow magic.” I had each class set up in a different room with a family member or friend helping out. I made signs for each of the rooms that you can download below.
Download Free Frozen Class Sign Printables (PDF)

Snowball Juggling: In this class they had to compete to see who could keep two white balloons afloat the longest. This was one of ladybug’s favorite. It was fun to watch the kids struggle as their balloons drifted further and further apart from each other. I have learned that kids are suckers for games that involve keeping a balloon in the air. I can’t explain it, but it is so easy to do and the kids love it so much that I have tried to work it into multiple parties.

Snowflake Making: We had a craft table set up with beads and pipe cleaners for the girls to make their own snowflakes to take home. I prepped the pipe cleaners beforehand so that the girls only had to slip on the beads. 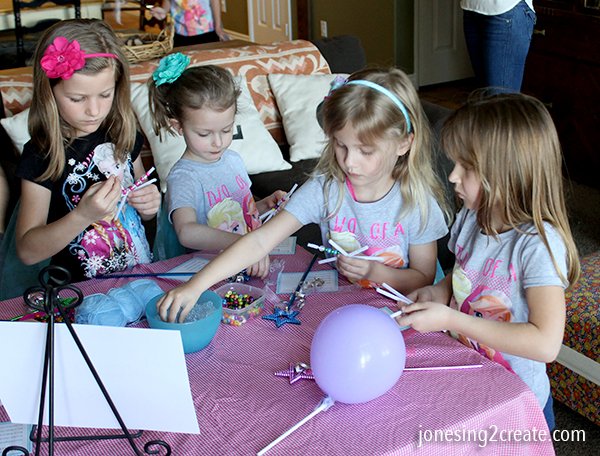 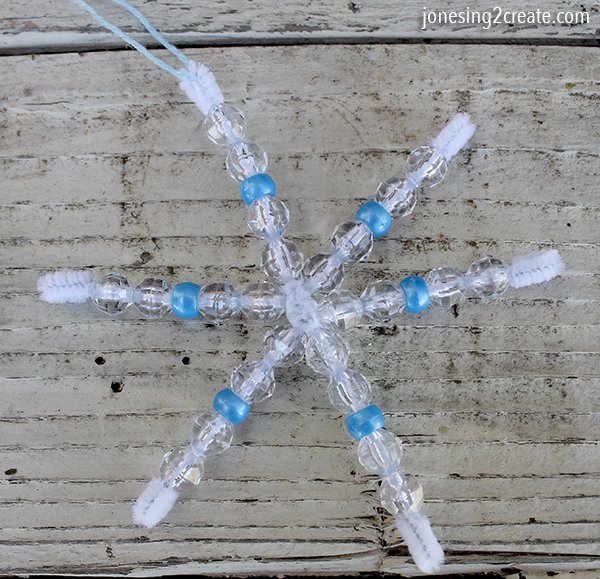 How to Build a Snowman: I made some white play dough with lots of glitter in it and then set out stuff like foam carrots noses, eyes, and buttons so that the girls could make their own Olafs. The girls loved the sparkly play dough! 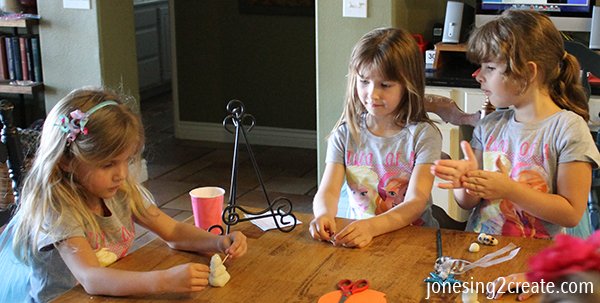 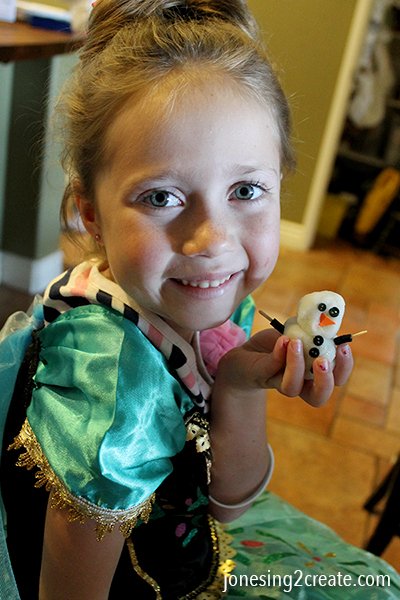 How to Build an Ice Castle: This was one of my favorite classes. I wanted to recreate the scene where Elsa is singing and building her ice castle. So beforehand I set up a screen to play the “Let it Go” music video on loop. We just grabbed our Mac mini and a large computer monitor, but you could also use a tablet in a pinch. I also bought a laser light that spun and flashed to the music from Amazon. When Elsa is building the castle, there are lots of flashing lights and I wanted to make it look like the video was extending out into the room. It is just a rotating LED light ball

and it cost me less than $15. It lights up the whole room and was so much fun. When I tested it out beforehand, I couldn’t help myself, I ended up having my own little dance party.

In the room, I told the girls that the louder they sang, the more the light would flash. So we cranked up the music and sang our hearts out with the girls dancing around and jumping on the bed. It was a amazing. Since it was so dark, I had a hard time getting good photos, but this gives you an idea.

How to Turn Water into Ice: This is a super fun science trick that blows people’s minds. And it looks just like something Elsa would be able to do! 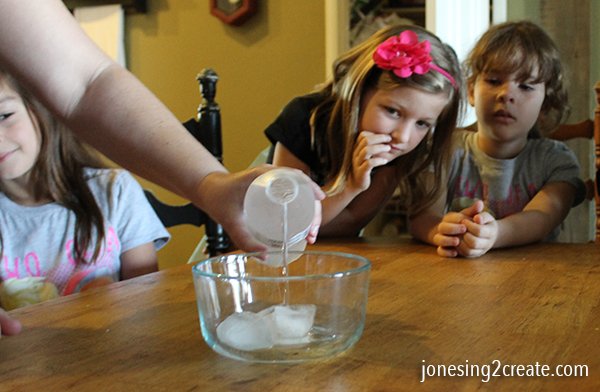 I guess for ice to form, it needs to form off of something. So if you have a sealed bottle of purified water in the freezer, you can get it below freezing before it will turn solid. You then very carefully take it from the freezer and pour it over an ice cube to start the reaction. The water turns to slush as it pours from the bottle. You can build really cool ice towers with it or you can pour it into a glass and make it look like you are turning the entire glass of water into ice with a touch of your finger. It is crazy. If you are going to do this, I recommend practicing a few times before the party and then have lots of bottles prepped and ready to go in the freezer in case one doesn’t work. When freezing them, you want to make sure that the bottles aren’t touching.

It isn’t school if you don’t have snack time. So after all our hard work, we stopped and ate some snacks, opened presents, and ate some cake!

Afterward, I brought out my homemade Olaf Pinata. This was one of the cheapest and easiest pinatas I have ever made. It cost me less than $3 and only took about 30 minutes to make. Inside the piñata were chocolate Hugs because Olaf is all about warm hugs! See full Olaf pinata tutorial 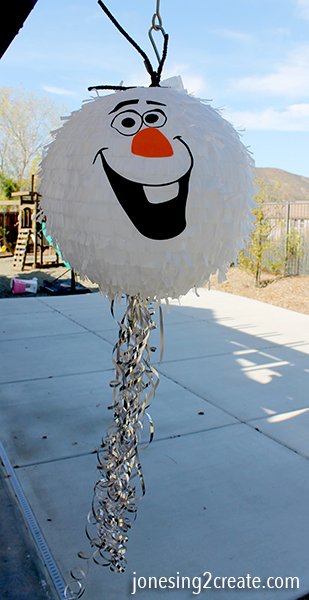 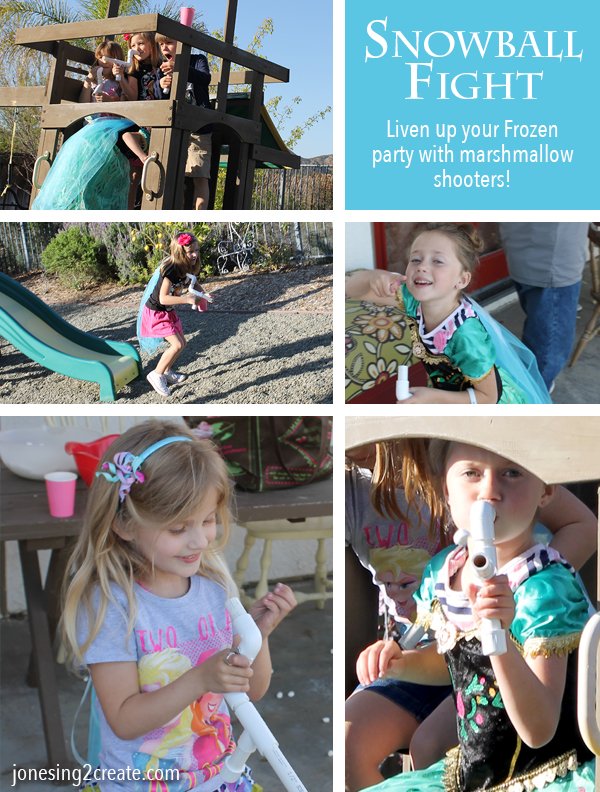 We had so much fun with our Nerf gun war at my son’s Star Wars party, that I wanted to do something similar for the girls. So I bought some PVC pipe and fittings and put together a bunch of really simple marshmallow shooters. My husband pointed out that since the snowballs were coming out of their mouths, it looked like Elsa sneezing on “Frozen Fever,” so we played the video for them beforehand.