How to repurpose an old CD tower into a Lego dollhouse 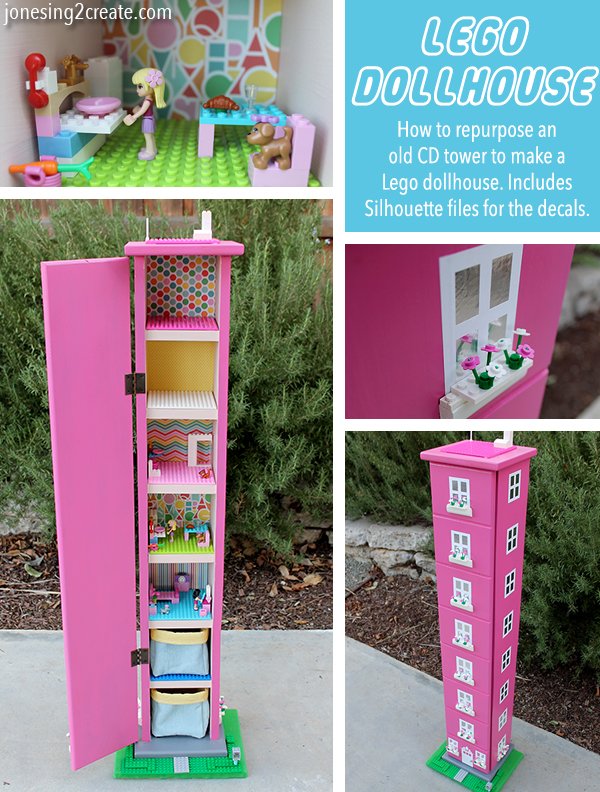 My Ladybug is crazy in love with Legos, just like her mama. We are a hardcore Lego family. I loved Legos as a kid and now I love sharing them with my kids. I could play Legos with my kids all day if I had the time. So for her birthday, I decided to make her a Lego dollhouse. I have seen ones made entirely from Legos, but that can get super expensive and I can totally see Ladybug dismantling it. I didn’t want to have to constantly be reconstructing it for her. I just wanted something simple that she could build off of and that would give her a place to store some of her creations.

The hardest part of the project was figuring out the design. I originally grabbed an old Barbie dollhouse and was going to restore it, but the dimensions were way off. It was just too big. I thought about using a bookshelf but had the same problem. The space between the shelves dwarfed the Legos. That is when I found an old CD tower at Goodwill. The shelf dimensions were perfect and I knew it would make the cutest little row house.

Find a CD tower:
CD towers are pretty easy to find in thrift stores because nobody really uses them anymore. I was lucky and found one with a door, but you could use one without a door too. In fact, most doll houses don’t have doors. My door used to have handles on it, so I had to pull out my wood filler and patch some holes first.

Something like the ones below would work well too. With the white one, you wouldn’t even have to paint it.

Refinish the CD tower:
Ladybug loves pink and row houses have a reputation for being colorful, so I sanded it down and repainted it a fabulous hot pink. I painted the inside a lighter pink and the bottom grey to make it look like cement. I then added a couple of coats of polyurethane so that it would hold up to abuse.

Create a base:
I didn’t want the tower tipping over too easily, so I grabbed a piece of plywood, covered it in green felt, and screwed it on the bottom of the tower as a base. Honestly, I covered it in green felt because I didn’t have any green paint and didn’t want to buy any. But you could paint it too. I screwed some smaller green base plates onto the base so that she would have a bit of a yard to work with too. I even made her a cute little mailbox for out front. 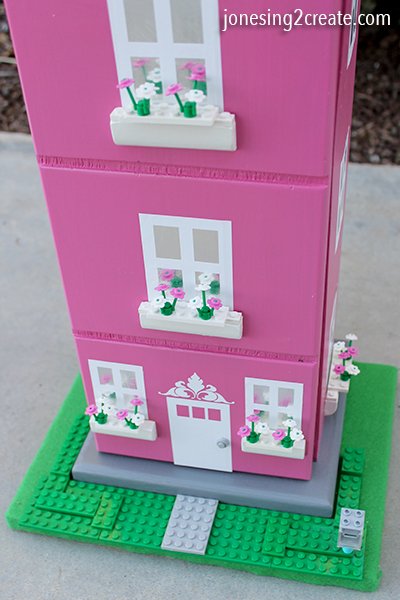 Decorating the outside:
For the windows, I used aluminum foil tape so that they would be shiny. It is basically the silver tape they use for HVAC work. It would also be cute to use a light blue vinyl. I stink at painting stuff freehand, so for the door and window frames I designed some decals for my Silhouette. It made it really easy to just stick them on there.
Download Free Silhouette File for Lego Dollhouse Decals 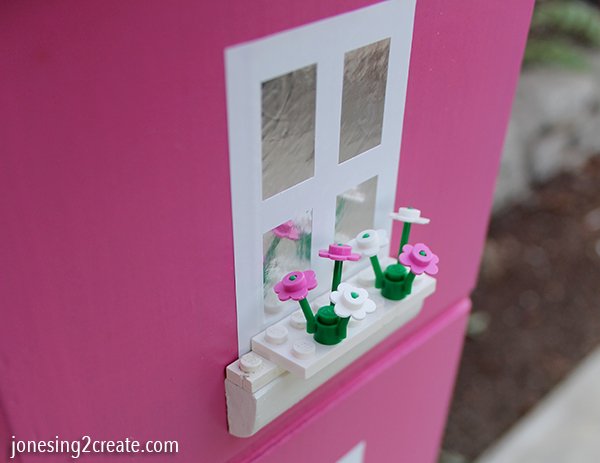 I wanted flower boxes, so I got some quarter round (the stuff they use for moulding) and cut it a little wider than the windows. After painting it and letting it dry, I glued it on with wood glue. Once the glue was dry, I super glued some 1x Lego pieces along the top. I found that it still wasn’t wide enough for the flowers, so I later added some 2x Lego pieces on top of that. I really like that it gives her some versatility with taking things off and adding it back on.

I am in love with the Lego flowers and bought a bag in bulk so that she would have plenty.


These fences would also be adorable!


For the finishing touch, I hot glued a small circle Lego onto the front door for the door knob and attached a 5×5 inch base plate to the top so that she could make a roof garden if she wanted to. I also made a chimney and an antenna. 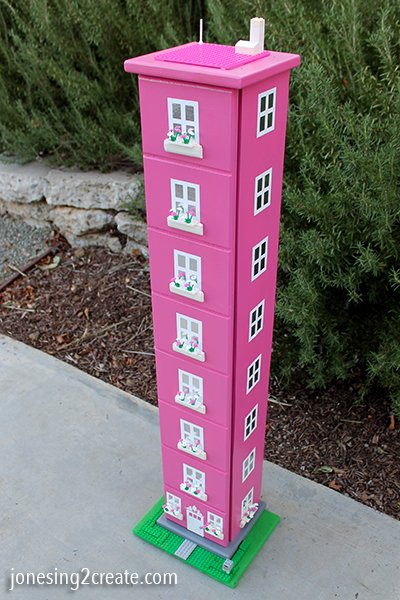 Decorating the inside:
I bought a set of 5×5 base plates from Amazon to use for the floors. The size was perfect for the CD tower.


The base plates are generic, but they work great and were lots cheaper than buying authentic Lego base plates. I didn’t want to glue them in, in case I wanted to remove them later, so I used 3M command strips. For the wallpaper, I just bought some cute scrapbook paper and attached it using double-sided tape. It works perfectly and will make it easy to remove if we want to redecorate later. 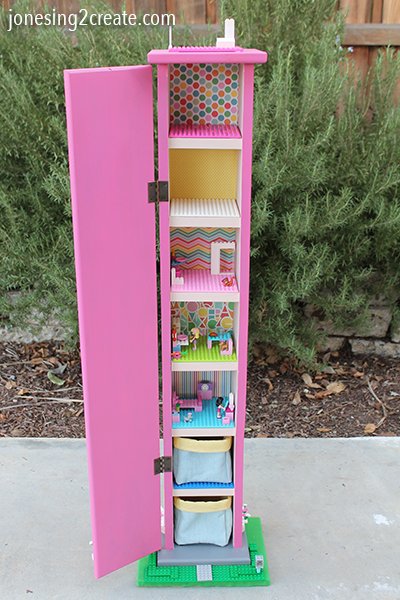 I wanted to give her some storage for her Legos, so for the bottom two shelves I made her some square fabric boxes for her to keep her little mini figures in. They are easy to take out in case she wants to use the main floor as a garage for her car. 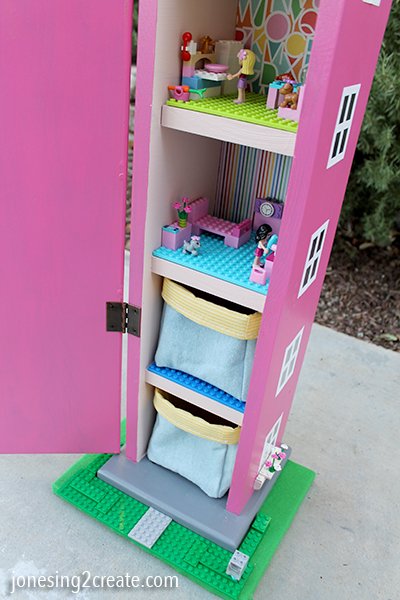 The day before I gave it to her, I had a blast furnishing the rooms with Lego appliances and furniture. I went through her stash of Legos to find things I could use. I was having so much fun that I had to make myself stop! One of my favorites is the glass door on the shower. 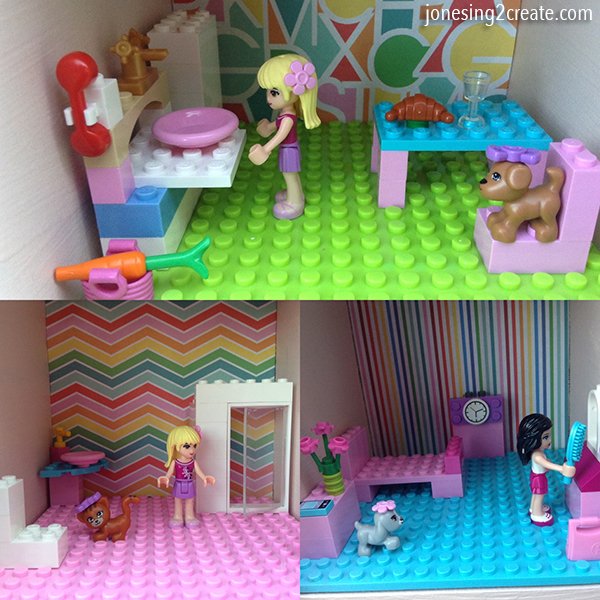 I knew that eventually she would replace the stuff with her own creations, and that was kind of the point. I love Legos because you can constantly reinvent when you get sick of something. She completely freaked out when she got to unwrap her dollhouse and it has been fun to see what she has come up with. So far we have gotten more bathrooms and a pet circus in one of the rooms. My favorite was a wheel axle that was turned into a roll of toilet paper.

I also love that it takes up very little space in her bedroom because it is tall and skinny, and that she no longer has to destroy all her creations when cleaning her Legos up. This was so simple to do and it has been one of my all-time favorite projects. I am totally in love with it!