For my son’s recent Star Wars party we wanted a surprise visit from Darth Vader during the Jedi Academy, but didn’t want to have to rent a costume or pay an actor. Luckily the Darth Vader costume isn’t very hard to do. I was able to put together the costume for under $40 and used a lot of stuff we either had around the house or could use later. 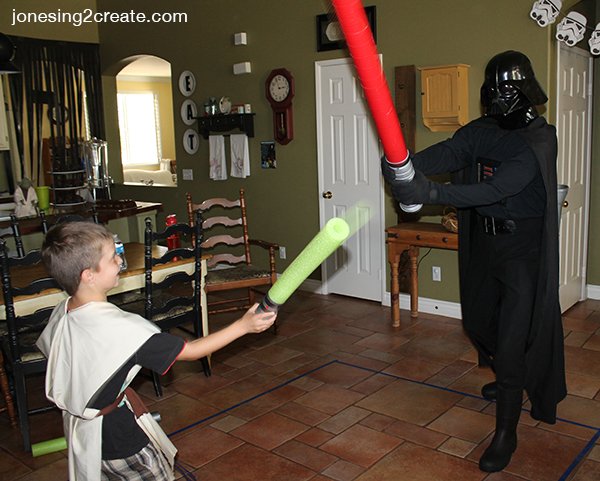 The Helmet: While there are tutorials out there for making a helmet, they were all way above my pay grade. But I found a great Darth Vader helmet for a great price on Amazon. And I figured that we could use it again for my son for Halloween some year. Plus the gag possibilities with a Vader helmet are endless.


The Cape: For the cape, I just bought a cheap, black microfiber sheet at Walmart. It was easy to gather the top and sew on a strip of ribbon to tie it on.

The Shirt: For the shirt I bought a long-sleeved black shirt at Walmart for under $5. For the control panel, I spray painted the top of a plastic blueberry carton black. Then I used glitter foam and duct tape to make the details. The two side bars are straws I covered in silver duct tape. Once I was done, I hand stitched the panel to the front so that I could easily take it off and he could wear the shirt later. It doesn’t look super professional, but from a distance it worked just fine. 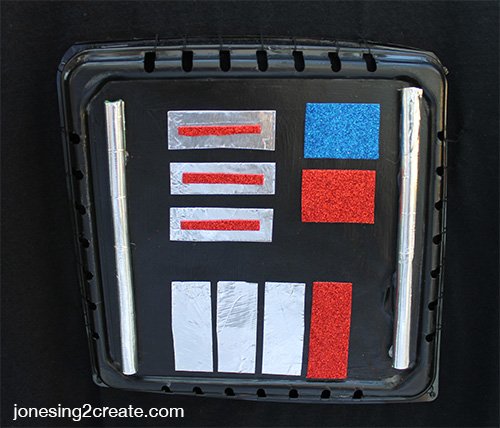 The Gloves: We just used some black work gloves I bought on Amazon. My husband always needs good work gloves, so these will get a lot of use elsewhere. I really liked these because they have a cool leather strap around the wrist.

The Belt: For the belt, my husband wore one of my stylish black belts. Yes, Darth Vader is tough enough to pull off women’s clothing.

The Boots: For Darth Vader, the boots really are a must have. Luckily for costumes like this rain boots work great and they are pretty cheap.


The Pants: We just pulled out a pair of my husband’s dress pants and tucked them into the boots.

I spent a lot of time researching ideas for the costume and at first I stressed about not having the chest plate or other stuff. But once I saw it all together it I found he looked awesome even without it.

And the kids really didn’t even care. With Darth Vader, it is really all about the helmet.