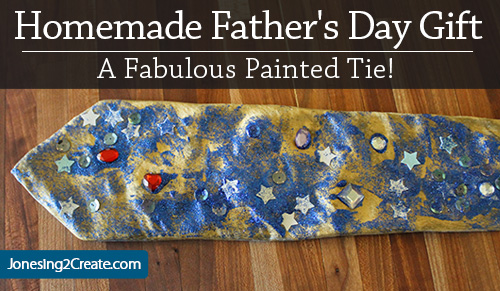 I love when my kids are able to make their own homemade Father’s Day gift. And I am always careful to give them full creative license. It might be messier, not as pretty, or even recognizable, but it means a lot more.

Last year for Father’s Day we made these totally awesome shirts, so this year we decided to do something a little different and decorate a tie.

I didn’t want to pay full price for the tie, so we headed to Goodwill to find a solid colored tie. My plan was to just let the kids glue stuff on it and write with markers, but all the ties had some kind of pattern. I was short on time and the kids were acting like maniacs between the clothes racks, so I decided to buy a light blue patterned tie and just let them coat the thing in paint.

Once we were home, I dressed the kids in large painting shirts and let them go at it. B– is obsessed with gold, so that was the paint we used. After it was done, I let it dry before we added some of the “bling” to it. B– also loves “jewels” and had a blast adding jewels, sequins and glitter. I swear the kid must be half pirate the way he is obsessed with treasure. Once I caught him trying to cut the jewels off my flip flops!

I had to let the tie dry again, so I hid it in the shed and told my hubby not to look out there. I also told the kids that they weren’t to let Daddy know what it was. G– told me, “Don’t worry momma. I already told him that it wasn’t a tie.” Bless her heart! But even though he knew he was getting a tie, he had no idea how fabulous it was!

The kids were so excited to give it to him and Daddy looked amazing in it at church that day. He also wore it to work on Monday. I love that man!

When the kids gave it to him B– said, “All the other dads are going to think, ‘Why don’t I have a tie like that?!’” Amen!