How to make dough rise faster 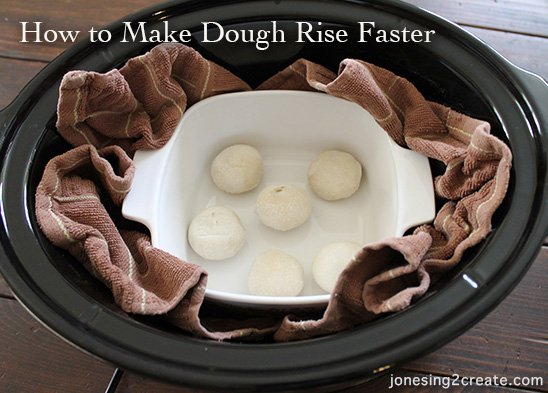 Rhodes and I have a conspiracy that goes way back and it is finally time to confess. If I have ever brought you a loaf of warm, fresh out of the oven bread, I totally didn’t make it. Although I have grand dreams of some day grinding my own wheat and making bread entirely from scratch, right now I am just struggling to keep on top of my laundry.

So when I crave homemade bread, I just plop a loaf of frozen bread dough in my bread pan and let it rise. Same goes for rolls.

But frozen dough takes forever to rise and sometimes I just don’t have the time. I have tried the warm oven trick before, but it is really hard to control the temperature and I often end up killing the yeast or the oven is too cool to do much. So this is how I make Rhodes rolls rise faster.

How to make dough rise faster

This works super fast for dough that isn’t frozen, but it is also how I make frozen rolls rise faster. So depending on the weather, I have two tricks.

Hot days: When it is nice and warm, I place my dough in the pan and spread some plastic wrap over the top. Be sure to spray the plastic wrap with some cooking oil so that the dough doesn’t stick to it. I then find a nice patch of hot sidewalk and let the heat do its thing. It works faster than the oven method and I don’t have to worry about it being too hot.

Cold days: When it is too cold outside, I pull out my crock pot to speed up the rising process. First I place a towel on the bottom of the crock pot so that the pan doesn’t make direct contact with it. You don’t want it to get too hot in any one spot. The goal is to evenly distribute the heat as much as you can. I then place the pan on top of the towel. This works best with small pans of rolls or a loaf of bread. I then put the lid on the crock pot and turn it to the lowest setting. You don’t have to cover the rolls because the lid of the crock pot already traps the moisture. Just let it set until the dough is twice its size. So easy! You can also use a heating pad under your bread pan.