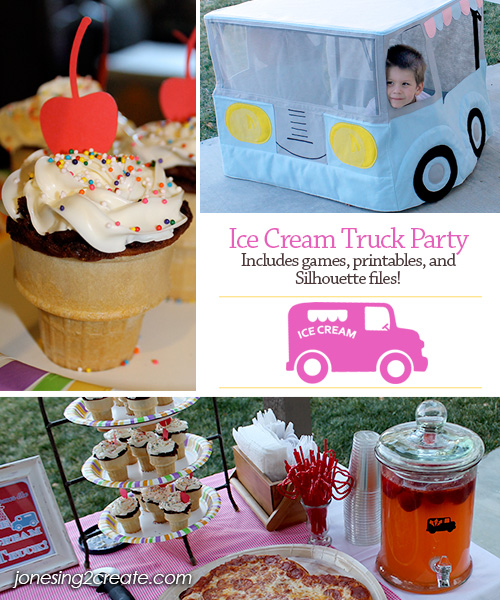 When my little girl was turning two she was OBSESSED with ice cream trucks. Even though we have never bought anything from an ice cream truck in our lives (we are far too cheap), D– was totally in love with them. So I thought it would be fun to use it for the theme of her birthday party. 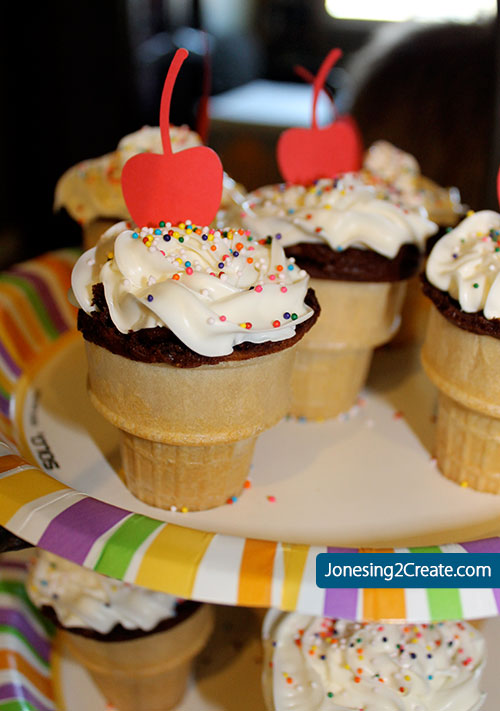 D– didn’t really like cake, so it seemed silly to make her a big cake. Instead I made cupcakes that I had baked into ice cream cones. I found it worked better if you put the ice cream cone upside down on top of the cupcake while baking: it didn’t get as soggy (see recipe at bettycrocker.com). It isn’t hard to do, but you may want to experiment with it once before the big day. I then used this Silhouette file for the cherry on top. I just cut it out on paper and glued it to a toothpick.

I served them by cutting holes in a paper plate the size of the cones and placing them on a three-tiered plate holder. It kept them from falling over.

And of course I did a custom t-shirt! I designed a cute little ice cream truck and then added D–‘s name to it. 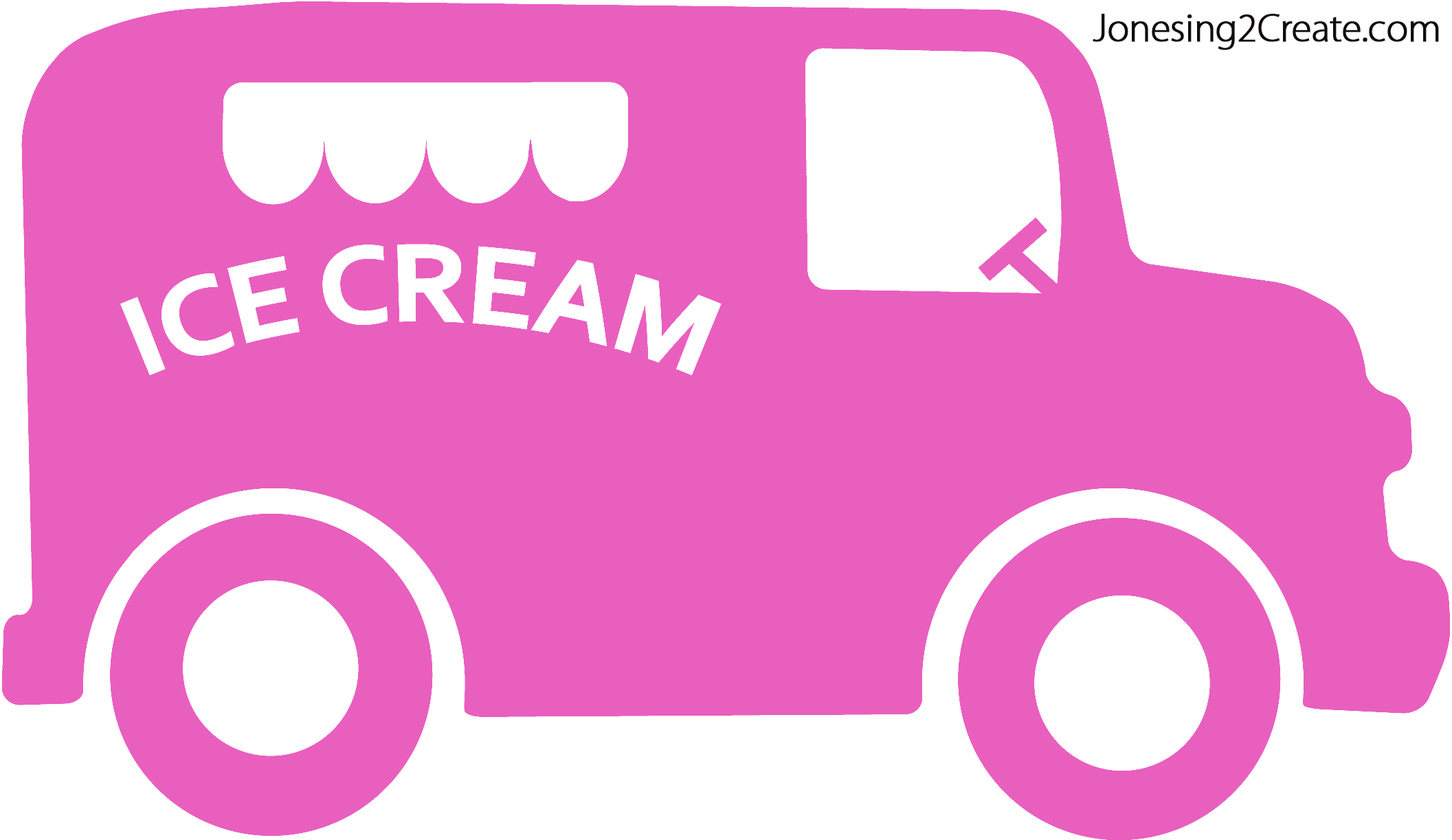 I dressed S– up as the ice cream man with a little apron and a bow tie I made. People had to “pay” him to get their ice cream. At first he refused to put on the costume, but when I said, “Okay, I will just find another little boy to sell the ice cream,” he quickly said, “Okay, please help me!” 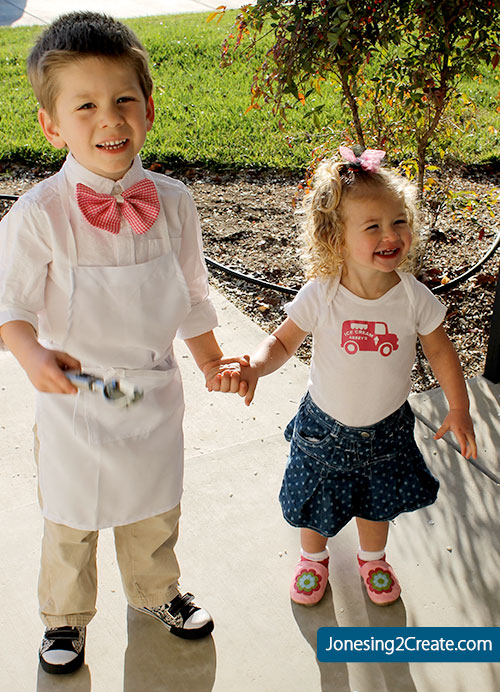 I wanted the kids to be able to “buy” their ice cream like you would with the ice cream truck, so I made some two dollar bills with D–‘s face on them and handed them out. Then everybody had to pay the ice cream man before they could get their ice cream. It was a total hit. D– loved having her own money and we were able to reuse it afterwards with their cash register. Kidsmoneyfarm.com has some great templates you can use.

But the biggest hit of the party was the amazing ice cream truck tent my sister-in-law Michelle made. 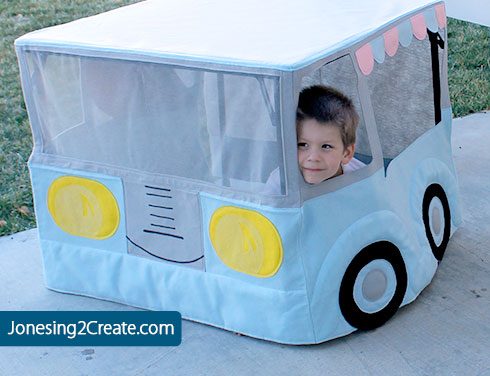 The idea was based off the cute felt playhouse that is designed to fit over a folding table that homemadebyjill.blogspot.com made. I figured if you could do a playhouse, why not an ice cream truck? Michelle took the idea and worked her magic! The result was amazing. My jaw totally dropped when I saw it. We even bought one of those music buttons so that the kids could push it and the truck would make music just like an ice cream truck.


S– sat in the ice cream truck and accepted people’s money before they went and got their ice cream. When I asked S– what his favorite part of the party was, he said it was the ice cream truck. The kids had a lot of fun selling ice cream out the side window and pushing the music button that we sewed into the side of it. Years later it is still getting heavily used and it is super easy to fold up and store.

We bought some of these and the kids later used them when they were empty to play ice cream truck. 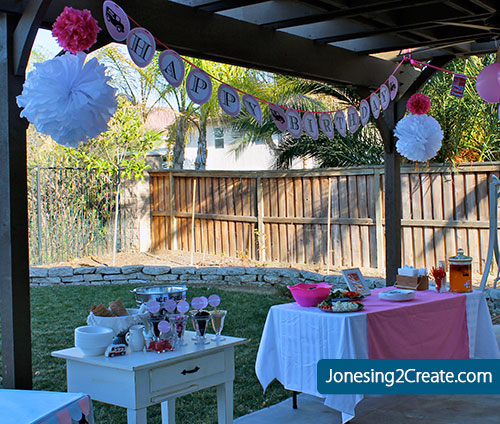 For the decorations I used the labels and printables from www.eatdrinkchic.com. They are adorable and perfect for a little girl’s party. I also made a cute banner to match the labels. I then cut a vinyl sticker out to put on the beverage dispenser and made some easy tissue pompoms. It was pretty no fuss, but turned out cute. 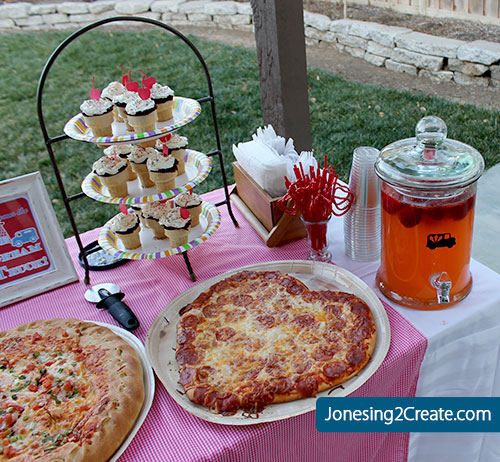 Next to the ice cream truck I set up an ice cream bar. I bought some ice cream sundae dishes from Dollar Tree to serve the toppings in. To keep the ice cream cold, I bought a galvanized steel bucket from Lowes and filled it with ice. I then set the container of ice cream on top. 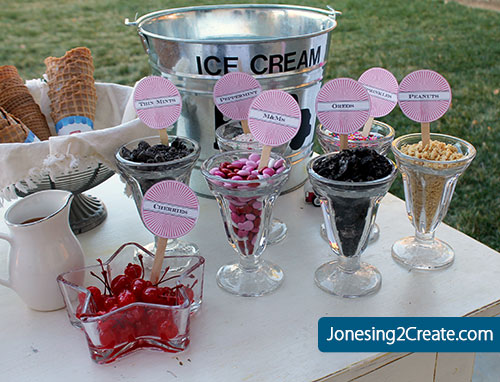 What ice cream truck party is complete without some ice cream truck music? I was able to download some for free from mistersoftee.com and played it in the background as people arrived. After that, it got pretty annoying. I don’t know how ice cream truck drivers handle listening to it all day!

Ice Cube Art: Using ice cubes with food coloring in them, we let the kids water color some ice cream cone pictures. They are really cute! See the instructions and printables at spelloutloud.com.

Ice Cream Cone Relay: Divide the kids into teams and line them up for a relay race. Give the first and second child in each line an ice cream cone. Then balance a wiffle ball on top of the cone of the first child. Have them run to the other side of the yard and back without dropping the ball. If they drop the ball, they have to start over again. Then have them transfer the ball to the next child in line without dropping it. Keep going until every child on the team has had a turn. The first team to finish wins. The rules can be adjusted depending on the age of the children.

Freeze Tag: Is there anybody who doesn’t know the rules to freeze tag? If you don’t, you can learn here. You should be ashamed of yourself!

Musical Chairs: You can play musical chairs and use the ice cream truck music. Simple to do and it is a fun tie in to the theme.