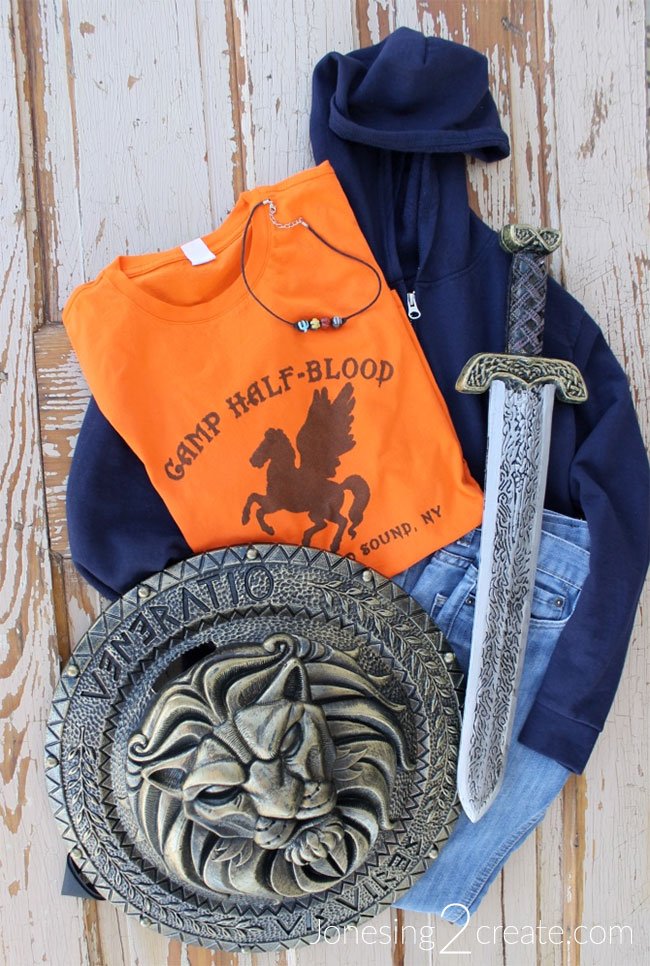 NOTE: I have an extra necklace that I made that is currently listed on Etsy.

Thanks to Rick Riordan, my son knows more about Greek, Roman, and Egyptian mythology than most college students. I am a huge fan of mythology, so I actually listened to a 24-hour college course on Egyptian history to try to keep up with him. It is loads more interesting than listening to him talk about Minecraft and it is fun to swap stories and challenge each other’s knowledge on a particular topic.

We are big book nerds in our house, so it makes me so happy when my kids fall in love with a book! And I love what Rick Riordan has done for my kid. He has taken challenges like ADHD and recast them as strengths. And he has made reading very accessible, even providing graphic novels for those who are less eager readers.

Throwing Together a Percy Jackson Costume

This costume was very simple to put together and I love that many of the pieces can be reused in my son’s wardrobe. The most important piece of the costume was the Camp Halfblood shirt. I was going to make it using my Silhouette, but I found it for a great price on Amazon. I also grabbed him a navy blue hoodie like you see in the movie. With it getting colder, he needed a hoodie anyway. 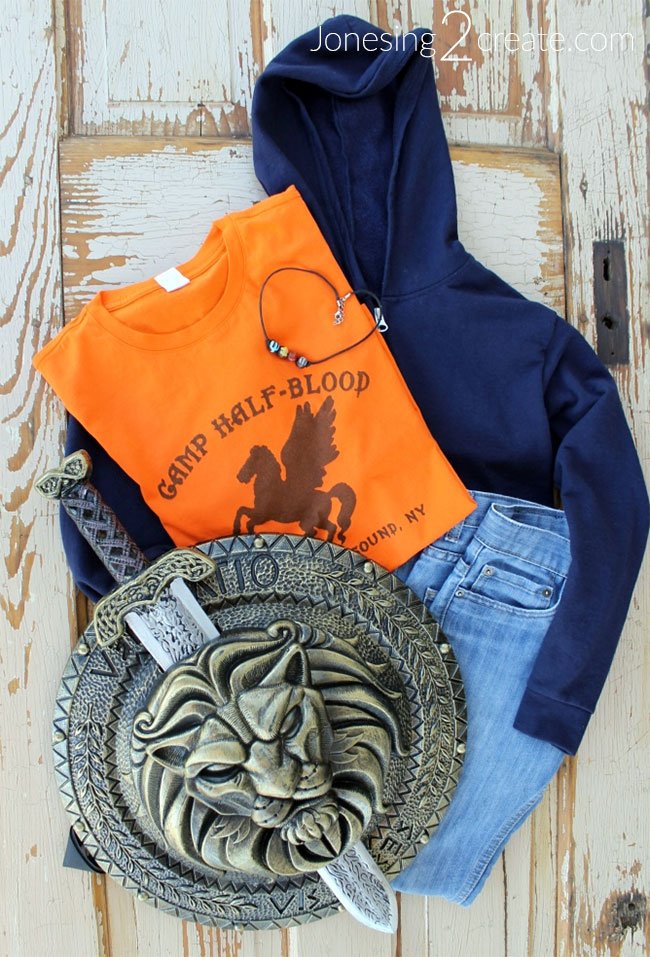 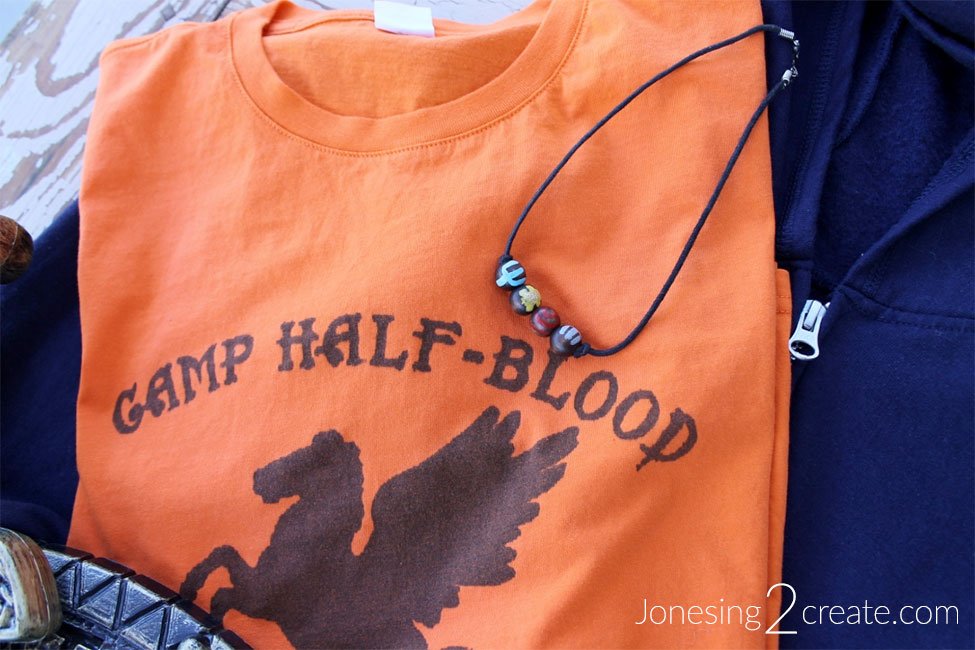 The part my son was most excited about was the sword and shield. Because I am nuts, I actually looked for some ways to make the shield expand from a watch, just like the one Tyson makes for Percy. But I quickly gave up. Instead I bought this gladiator shield with sword from Amazon. I liked that he could slip the sword into his shield so that he didn’t have to hold a ton of stuff while trick or treating. Very practical! 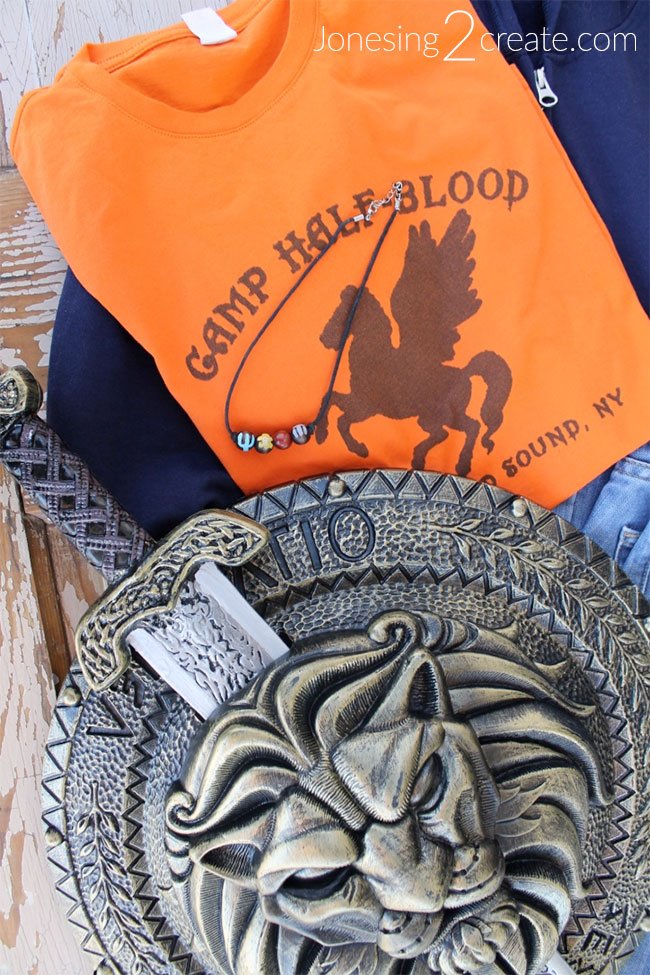 If you have read the books, you know that Percy Jackson also needs a necklace. At the end of each summer, the campers receive a bead that has the biggest event of the summer painted on it. Percy has been at camp for 4 years, so he has 4 beads – the trident, the golden fleece, the labyrinth, and the Empire State Building. They sell some on Etsy, but I decided to just take a stab at it myself. I was glad I did because it wasn’t that hard and it was actually a lot of fun. I used wood beads instead of clay beads because I already had some on hand. The trick is to use a decent paint brush. And I used the craft acrylic paint you find in craft stores. 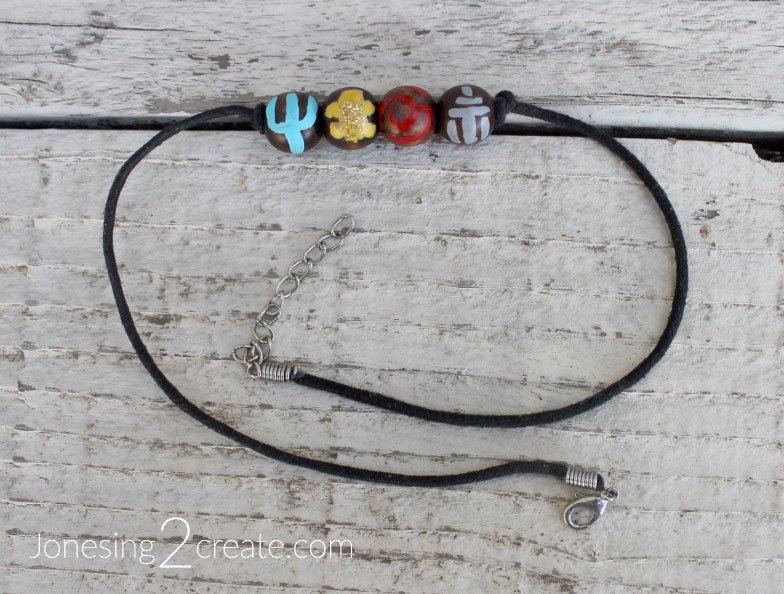 Do you like my custom, potato, bead drying stand? 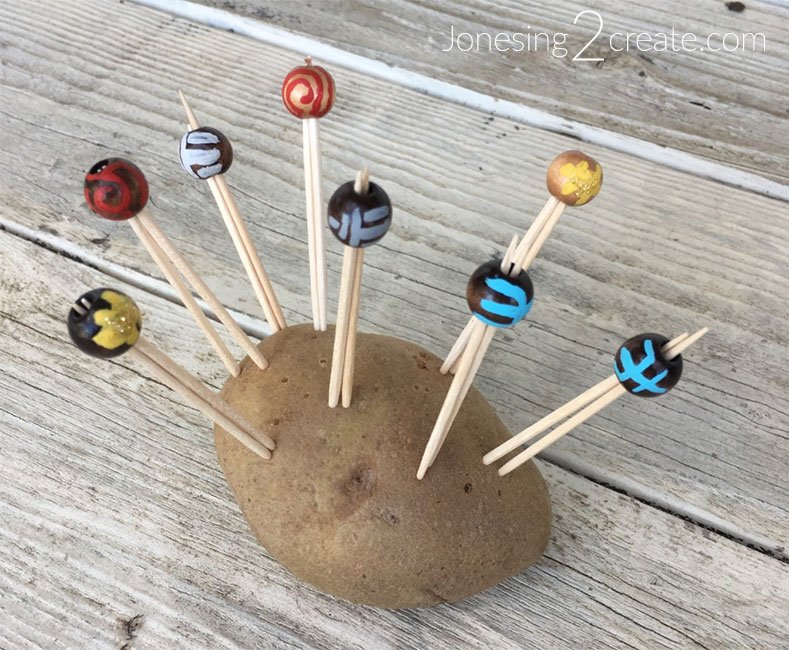 The labyrinth was the hardest to do, but I tried to just keep it simple. They aren’t 100% perfect, but they look as good as the ones I saw on Etsy. If you don’t want to make your own, I made an extra one that I have listed on Etsy. 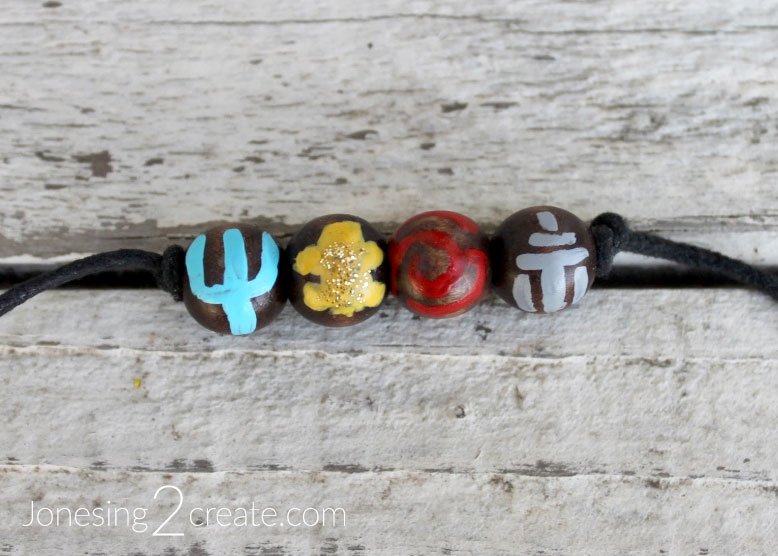 The best part of making this costume was that I had a wonderful little research assistant. My boy poured over his Percy Jackson and the Olympians: The Ultimate Guide book and placed little post-it notes on all the relevant pages.


He found a few other nice touches to add to the Percy Jackson costume.

Hermes’s Bag: In Sea of Monsters, Hermes gives Percy a yellow, waterproof, duffle bag. While I am sure that nobody else got the reference, my boy was really excited when I got him a yellow bag to use for his trick-or-treat bag!


Golden drachmas: Any demigod is going to need a few golden drachmas when leaving on a quest, whether it is to send a message through Iris or to catch a taxi ride with the Gray Sisters. Having a few of these in your pocket is a lot of fun because you can hand them out to fellow Percy Jackson fans.


Nectar: If you are injured on a quest, you are going to want to have some nectar on hand for healing. Take a canteen with you while trick-or-treating, and you can take a quick sip if you need a pick me up. But don’t forget that nectar can only be drunk by gods and demigods!


Ballpoint pen: Although I couldn’t find a ballpoint pen that turns into a sword, my boy still thought it was fun to have one on hand. And this one is also a flashlight for when you are trick-or-treating in dark areas!


Even though it was a really simple costume, when my boy put on his Percy Jackson costume, he REALLY got into it! It was fun to watch him dart around fighting monsters. 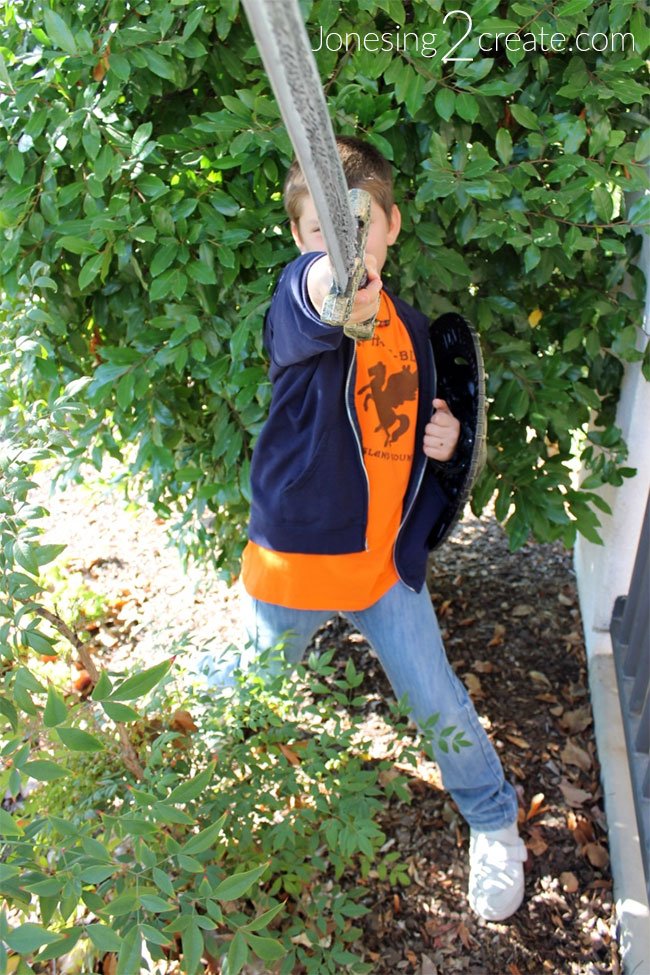