Things start to heat up in the Moana Scavenger Hunt with the Moana Coconut Balloon Pop Game. This challenge not only requires the kids to navigate a map, but they also have to climb a rope and pop a balloon. The good news is that it isn’t that hard to set up. The basic components are pretty simple and you can make it as fancy or easy as you want. This one was one of my favorites because I loved watching the girls faces. It was very intense and they were very into it!

Video Clip: (I like to pair party games with clips from the movies since it makes it more “real” for the kids.)
Moana’s grandma shows her the cave and she learns about her people’s past. (DVD Clip Time: 21:30 to 24:00)

Instructions to Kids:
Before you can start your adventure, you must visit the cave, find your boat, and bang the drum. Before you can find the cave, you must collect the coconuts, identify the rotten ones, and find the one with the map. In the movie, the darkness is spreading and causing the coconuts to rot and get powdery inside.

Moana Coconut Balloon Pop Game Challenge:
One at a time, the girls will climb the rope, grab a balloon, and pop it. Once they find the one with the map, they will follow the directions to find the “cave” and the drum inside. They then need to bang on the drum.

Moana Coconut Balloon Pop Game Set Up:
I know that in the movie, Moana’s grandma shows her where the cave is, but where is the fun in that? So I took some creative liberty and mixed up the rotten coconuts with her finding the cave.

Drum
You will first need a drum. I have one that I made when I was in high school (which has an awesome backstory), but you can also use an upside down plastic pot or even a large cooking pot. If you want to get fancy, you could cover them in brown craft paper and draw designs on it.

Cave
You will then need a place to hide it. We have a shed in the backyard, but you could also hide it behind some bushes or a room in the house.

To make the shed look like more of a cave, I placed a sheet around it to hide all the tools. It wasn’t super fancy, but it totally did the trick.

I placed this sign up at the top so that the girls would know what to do. I will be posting it on my Moana printables post later. 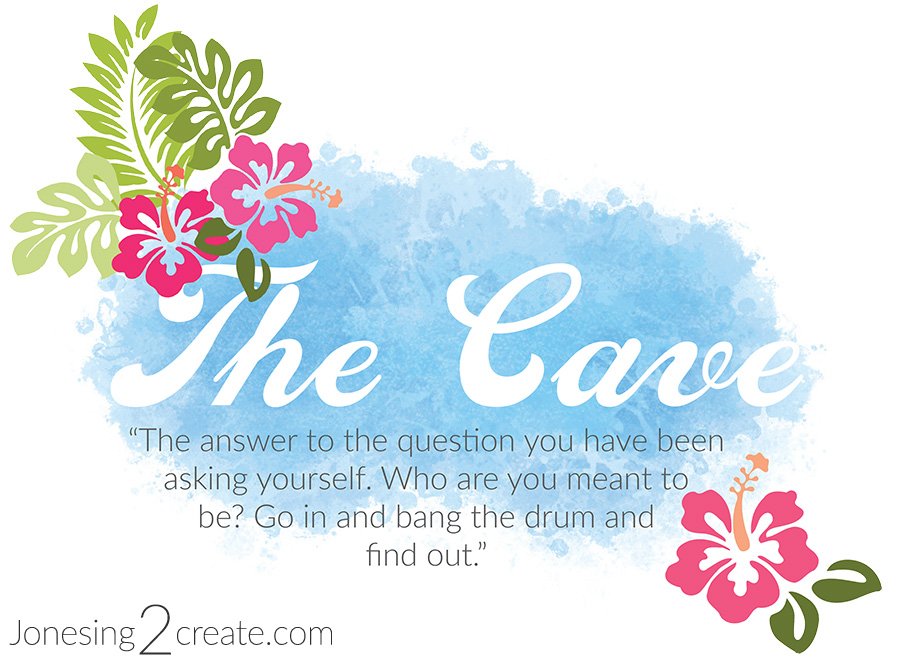 I then closed the door so that nobody could see it!

Coconuts
I bought a bunch of brown balloons for the coconuts. On the day of the party, place a map in one of the balloons and blank pieces of paper in others before blowing them up. I did this because you could see through the balloons and I didn’t want the girls to be able to peek and know which one had the map. I then hung the balloons from the swing set with string.

If you want, you can add baby powder to inside the balloons to make them look like they are rotten inside when they pop. 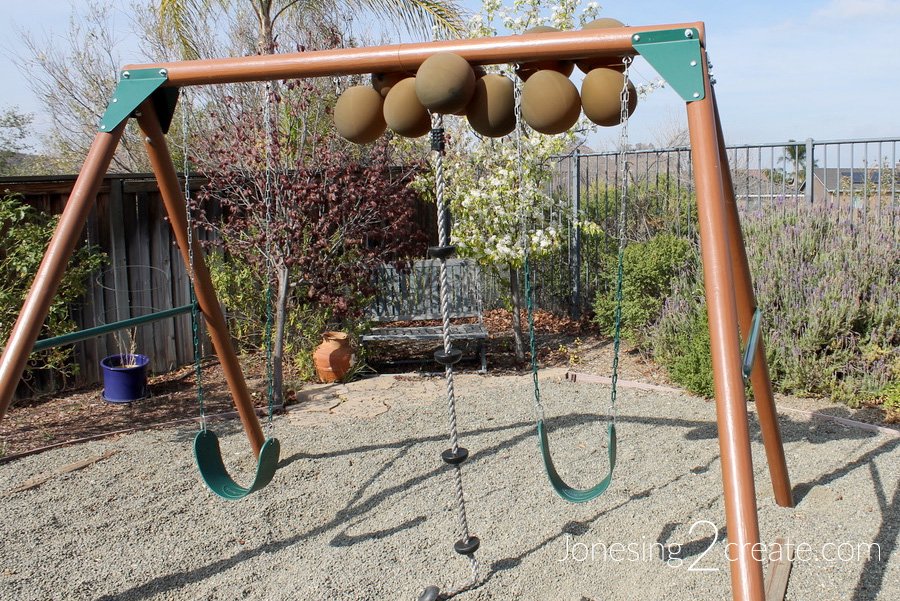 We got this climbing rope for Christmas and the kids love it. It is just like climbing up a swaying coconut tree!

The girls then took turns trying to get the coconuts from the top of the swing set. 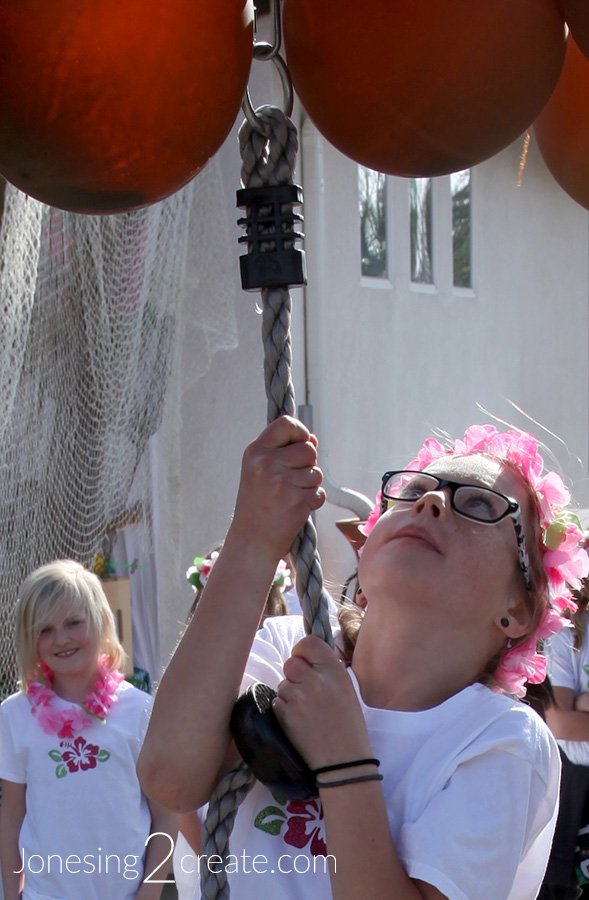 Once they pulled one off, they had to pop the balloon and see if the map was inside. 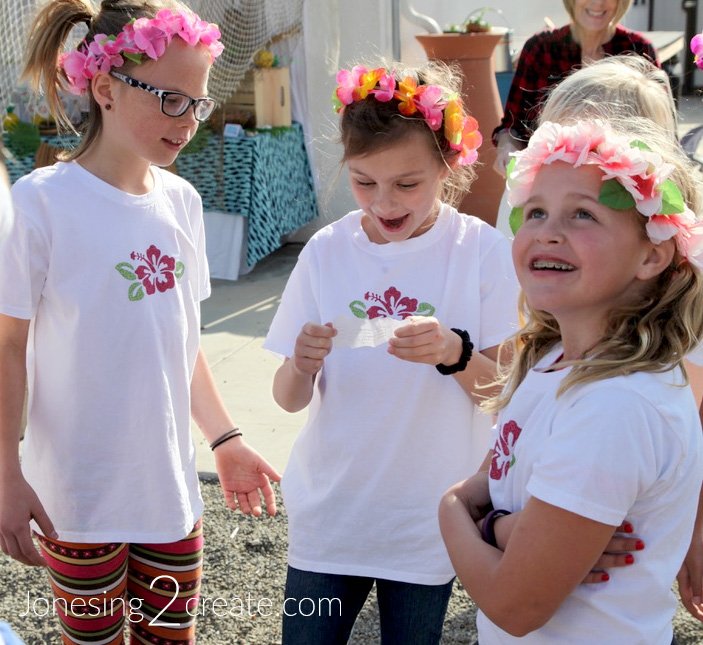 Once they found the map, they followed the instructions and found the cave! 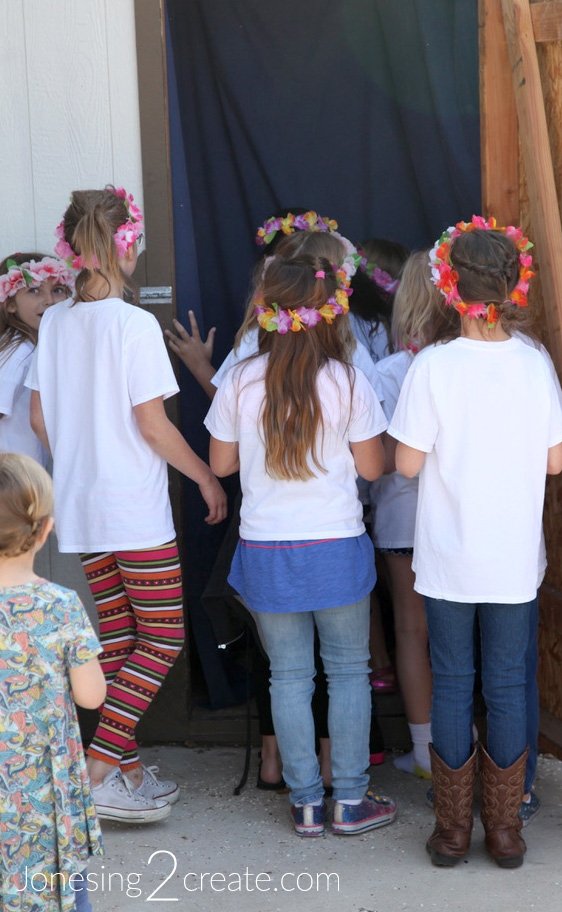 After finding the cave, each of the girls went in to bang the drum. Their ancestors didn’t come out singing, but they did learn what the next step of the scavenger would be! 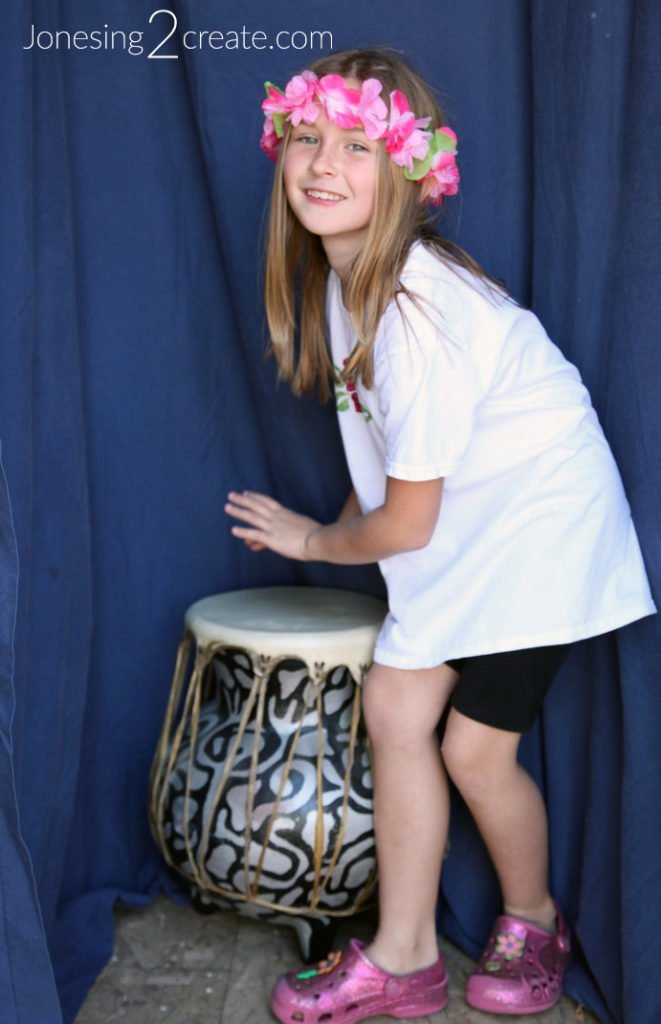