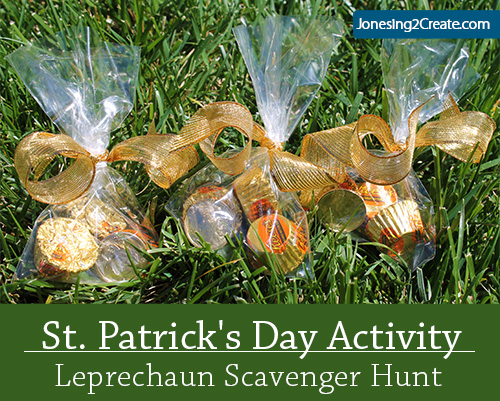 After two years in a row, I guess our Leprechaun Scavenger Hunt is on its way to becoming a tradition!

Last year B– was obsessed with anything having to do with gold or diamonds. When he heard in kindergarten that leprechauns hid gold, he was immediately intrigued. He spent hours grilling me about where they hid their gold and how to find it. We talked at length about how tricky leprechauns were and how hard it would be to find their pot of gold. He reminded me of Artemis Fowl as he plotted and schemed.

It was too much fun watching him. I couldn’t resist setting up a hunt on St. Patrick’s Day! So I wrapped up some small, gold Reese’s buttercups and plotted out a simple scavenger hunt with clues. It was pretty last minute, so I kept it real simple.

This year I put a little bit more effort into it since we would be doing it at my parents’ house with their cousins. I decided to do basically the same hunt, but I made the clues rhyme this time.

I started the hunt by telling the kids that leprechauns usually don’t share their gold, but that I was able to convince them to give us some clues to see if we could find it. I explained to them that leprechauns are very tricky, so they needed to be very careful. I then handed them the letter from the leprechauns. It was rolled up like a scroll and tied with a gold bow. Download Leprechaun Letter (PDF)

“So I was told,
You want my gold.
But I am tricky
And very picky
About who can seek
My treasure’s peak.
But if you choose
To follow my clues
And show you are plucky,
You might get lucky!
So before you lose,
Put on your shoes!”

Beforehand I had tied all their shoes together with fishing line. When the kids went to put on their shoes and discovered they had been tricked they moaned and yelled out things like, “Those tricky leprechauns!” or “They are tricking us!” It was so cute! We had to help them cut the line off the shoes before they could put them on.

The next clue was hidden in one of their shoes.

“It is well told
To find a leprechaun’s gold
A rainbow you must find.
So use your mind
And head outside
To the climbing tree side!”

The kids always climb the tree in front of my parents’ house so we headed out front. Beforehand I drew a rainbow with sidewalk chalk on the driveway. It took the kids a while to spot the rainbow and it was cute when they finally saw it. 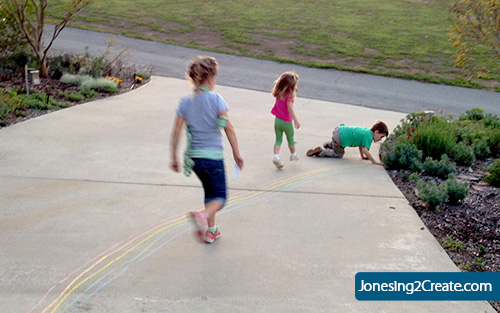 But those tricky leprechauns had put another clue at the end of the rainbow instead of the pot of gold!

“We tricked you!
It’s true!
This won’t be easy.
Head to the back where it is breezy.
On a shamrock true
You will find the right clue.
But some will lie,
Because we are sly!”

The kids then headed to the backyard where I had a bunch of shamrocks hidden.
Download Shamrock Template (PDF)

All of the shamrocks were blank except one, which had the next clue. I hid that one the best so that they found it last. They moaned and groaned as they found shamrocks that didn’t have any clues (those tricky leprechauns!) until they finally found the right one.

“You are almost at the end
My clever friend,
Your thumbs do not twiddle,
To find the treasure just solve our riddle!
‘Give me food, and I will live;
give me water, and I will die. What am I?’”

With some help, the kids were finally able to solve the riddle. It is fire! They then figured out that it was talking about my parents’ wood burning stove and they headed back into the house. If you don’t have a fireplace, you could light a candle some where for the kids to find.

Once they kids went to the stove, they found little bags filled with gold Reese’s Buttercups and a gold-colored dollar coin that I had picked up for each of them at the bank. It was so easy to do and so much fun! And I loved hearing the kids complain about those tricky leprechauns!